A Journey to Andalusia: The Moorish Stronghold of Granada 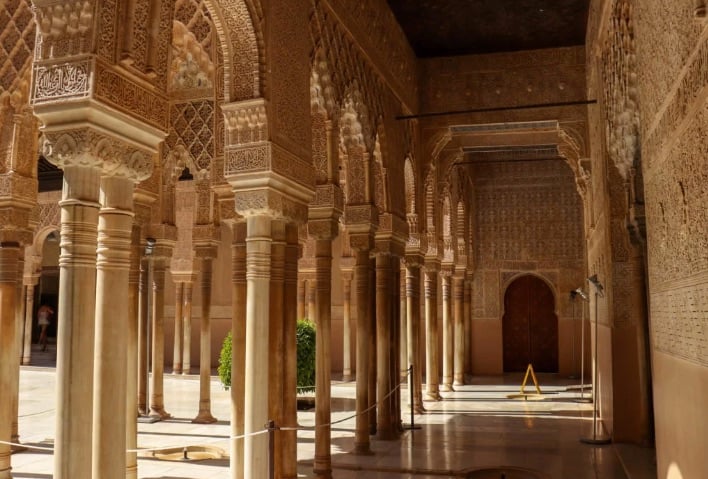 A Journey to Al-Andalus: Part II, The Cultural Crossroads of Seville

The fall of Moorish Granada to the Catholic Monarchs Ferdinand and Isabella in 1492 marked the end of the Reconquista and the ultimate collapse of al-Andalus, the Islamic territory that had stretched across the Iberian Peninsula for over seven centuries. That same year, Granada became the site where Christopher Columbus received royal endorsement for his first voyage to the New World, the discovery and subsequent conquest of which would result in a golden age for the newly founded Spanish Empire and the spread of Christianity across half of the globe.

Nonetheless, the story of Granada does not begin here but with the arrival of Moorish invaders from North Africa. In the year 711, the Umayyad Caliphate began expanding over what was then the southern extent of the Visigothic Kingdom. With their capital in Córdoba, the Moors founded the city of Granada around one of their first military strongholds in the region: the Alhambra.

The Alhambra and Generalife

The first historical accounts of the Alhambra date back to the 9th century, when the military fortress was just a chain of defensive walls and towers. It was not until the rule of Muhammad I, who founded the Emirate of Granada under the Nasrid dynasty in 1230, that the Alhambra became a royal residence and one of the best examples of Moorish architecture in all of al-Andalus. Of the three palaces built by the successors of Muhammad I, the Palace of the Lions, constructed between 1362 and 1391 under the reign of Sultan Mohammad V, is particularly notable for its impressive courtyard.

Also called the Patio of the Lions, the courtyard is surrounded by 124 white marble columns. According to some interpretations, they were intended to symbolize a forest of palm trees in a desert oasis, following possible representations of Paradise. Many of the arches are decorated in the mocárabe style, which is characterized by complex arrays of hanging stalactite formations. The upper parts of the arches feature rhomboid sebka designs and demonstrate the central position that geometry holds in Islamic architecture.

Since Islamic art avoids the depiction of animals or human motifs, many of the walls and arches are adorned with ornate epigraphs engraved into a layer of soft plaster that covers the much harder marble columns. To date, more than 10,000 different epigraphs have been identified on the walls of the Alhambra. While many of the engravings are pieces of poetry or quotations from the Quran, the most frequently appearing engraving is the Nasrid motto Wa-la galib illa Allah, which means “There is no greater conqueror than Allah.”

Apart from decorative stone and plaster, the Alhambra also offers striking examples of ornate woodwork. This door leading from the courtyard into the palace, where the sultan’s great halls and harem were located, features carvings of stars situated in a web of repeating geometric patterns. The frame of the doors is surrounded by a plaster arch decorated with highly detailed arabesques, designs inspired by interlacing foliage or vegetation. Directly above the doors, yet another example of engraved epigraphs can be seen.

One of the five great halls of the palace is the so-called Hall of the Two Sisters, a series of chambers where the sultana and her family lived. The large mocárabe dome is surrounded by pairs of small stained glass windows. What is notable about the current condition of the hall is that traces of the original blue and yellow paint, which used to cover all of the Alhambra’s decorative plasterwork, are still visible. The light from the windows combined with the brightly colored mocárabe dome was intended to give the effect that the entire ceiling is like a giant flower, another commonly occurring motif in Islamic art.

Directly outside the military-residential complex of the Alhambra lies the Generalife, a leisure place for the sultans of Granada when they wished to retire from official affairs. The most important part of the Generalife was the Patio of the Irrigation Ditch, which was the location of a channel that supplied water directly to the Alhambra. This courtyard also housed two pavilions on its northern and southern sides as well as a garden of orange trees, cypresses, roses, and myrtle bushes that lined the channel. Despite the presence of certain decorative elements, the architecture of the Generalife was intended to be more modest than that of the royal palaces, providing the sultans with an intimate and peaceful atmosphere when they were away from their daily duties.

Located on a mountain across the Darro River from the Alhambra is the historic Moorish district of Albaizín. At the top of the mountain, on an even altitude with the Alhambra and Generalife, lies Sacromonte, the traditional neighborhood of Granada’s gypsy community. It is widely believed that the gypsies (or gitanos, as they are called in Spanish) arrived in Granada after the Christian reconquest at the end of the 15th century, at a time when large portions of the local Jewish and Muslim communities were being expelled from their homes.

Upon reaching the mountaintop, the gypsies largely abandoned their nomadic lifestyle. They began to excavate caves in the sides of the hills, placing arched doorways at the entrances to provide support. As excavation continued, the system of caves that would comprise a dwelling was shaped into a barrel vault, with furniture pieces such as cupboards and shelves dug directly into the walls. Finally, the floors were tiled and additional pieces of furniture such as tables and beds were added.

The dense cacti vegetation that covers the mountaintop ensures that the caves remain dry by soaking up excess moisture. Additionally, a layer of whitewash on the exterior protects the dwellings from the sun while simultaneously protecting them from being exposed to the bare mountain soil on the interior. Despite Granada’s extreme climate of hot summers and cold winters, the interior temperature in a well-oriented cave dwelling ranges between 16º and 19º C year-round.

A typical cave dwelling consists of a hall, a kitchen, a bedroom, and a living room. Although most of Granada’s cave dwellings remain inhabited and have usually undergone some form of modernization, traditional cave dwellings can still be visited in the Cuevas del Sacromonte ethnographic museum. Additionally, many of the original dwellings have also been turned into tablaos, or venues where flamenco shows are performed. If looking for a different way to explore the city and its culture, visitors can pick up a copy of Washington Irving’s Tales of the Alhambra or Federico García Lorca’s Romancero Gitano in one of the local shops to experience Granada through the eyes of these literary masters. However, there is also nothing wrong with those who prefer to take a seat by the river with a glass of wine and simply try to imagine the 1,300 years of history that surround them.