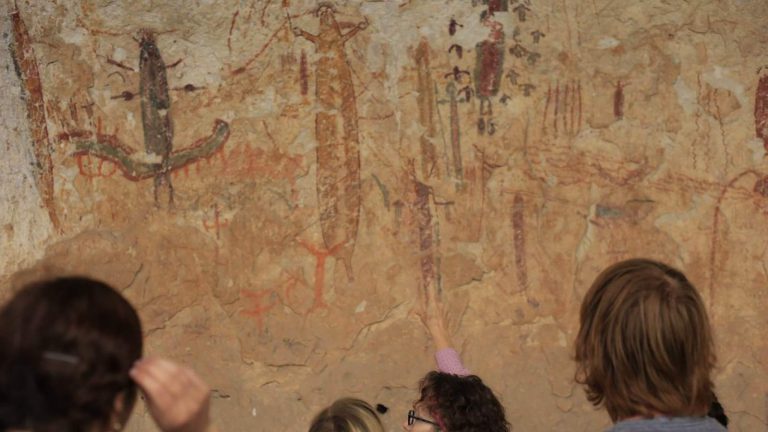 On the Texas-Mexico border, there are treasures of prehistoric art: hundreds of painted caves and rock shelters dating as early as 2000 BCE. Filled with multicolored animals, symbols, and humanoid figures, Lower Pecos rock art gives a taste of prehistoric North American belief and ritual. Scholars have termed these paintings “the oldest known books in North America” because of the valuable information they contain.

Prehistoric rock art, or paintings and carvings on natural, non-portable rock surfaces, appears on every continent of the world. The oldest known example is 45,000 years old and found in Indonesia. North America contains many, albeit much younger, rock art sites.

Some of the most celebrated examples occur in the Lower Pecos Canyonlands, a roughly 100-mile stretch of land where the Rio Grande and Pecos Rivers meet near the Texas-Mexico border. Over 300 cave paintings appear there, some measuring more than 100 feet long. They depict people, animals, and symbols in earth pigments, like red and yellow ochre and charcoal.

At up to 4,000 years old, these paintings predate the earliest writing by North Americans. This pictorial repository of prehistoric ritual and myth forms the greatest-known resource about the ancient hunter-gatherer People of the Pecos.

It is my considered opinion – after having seen rock art on all the continents – the Pecos River rock art is second to none and ranks among the top bodies of rock art anywhere in the world.

The first written mention of rock art in the Lower Pecos occurred in 1849, and some sites were receiving visitors via passing railroads by the late-19th century. However, concerted efforts to study them did not begin until the early 1930s. In 1931, artist Virginia Carson began recording the images in sketches.

Currently, Dr. Carolyn Boyd is the foremost expert on Lower Pecos rock art. Originally an artist, Boyd felt so strongly about the murals when she first saw them that she got a doctorate in archaeology to better interpret them. In 1998, Boyd founded the Shumla Archaeological Research & Education Center, dedicated to studying and preserving the Lower Pecos rock art.

Scholars have identified five different styles of painting in the Lower Pecos. The oldest, called “Pecos River Style,” is the most plentiful and elaborate researched. Pecos River Style features multi-colored anthropomorphs, or abstracted, humanoid figures of varying sizes and styles. They have long, thick bodies and short, skinny legs, and often appear with attributes such as headdresses, staffs, or atlatls. The titular White Shaman Figure at White Shaman Preserve is a perfect example. These colorful and intriguing anthropomorphs probably explain a lot of the general fascination with the “Pecos River Style.”

The other styles have received the titles “Red Linear Style” (sketch-like human and animal forms), “Red Monochrome Style” (more complex human and animal forms), “Bold Line Geometric” (geometric patterns and small figurative images), and “Historical Period” (figurative scenes made after European contact). While the vast majority of Lower Pecos rock art consists of paintings (pictographs), a small selection of engraved petroglyphs also appear. The People of the Pecos also had a tradition of portable art in the form of small, painted pebbles.

Interpreting any sort of prehistoric artworks represents a unique challenge because of how little we know about the cultures that created them. Archaeologists sometimes look to better-understood beliefs and customs of Mesoamerican and American Southwest cultures to help explain the Pecos paintings. These so-called ethnological interpretations can be controversial, particularly when comparing cultures widely separated by time. However, they certainly provide some rich and compelling ideas.

Some of the imagery has been interpreted as representing Pecos-area myth, history, and cosmology. Others have been connected to rituals involving shamanism and hallucinogenic Peyote and Mescal Bean. Evidence of both substances has been found in associated excavations. These theories hold that some of the anthropomorphs may represent shamans, and larger scenes could reflect what these shamans saw in their trances. The connection between geometric shapes like those on many cave walls and altered states of consciousness has previously been established by specialists in European rock art.

Images involving snakes and wavy arches seem to connect with how some Native American cultures have envisioned gateways to the spirit world. More specifically, Boyd and other scholars have drawn parallels with the continuing Peyote practices of the Huichol peoples. In this interpretation, images of deer with dots on their antlers connect with the Huichol myth of a sacred deer bringing them Peyote. Larger dots with lines through them represent the Huichol’s annual Peyote-hunting ritual.

At first, archaeologists assumed that the walls of these caves had acquired artworks piecemeal over time. Therefore, the juxtapositions between figures were assumed to be random. Dr. Boyd has more recently suggested that they are actually unified compositions planned and then executed all at the same time. The discovery of under-drawings that laid out compositions before the application of paint helps to support her theory. Modern culture may have conditioned us to think of imagery on cave walls as some kind of casual graffiti, but that’s clearly not the case here.

Lower Pecos rock art has lasted for thousands of years thanks to the very dry local climate. Unfortunately, it may not survive for much longer due to a combination of human and environmental threats. An endeavor called the Alexandria Project is attempting to protect them. Part of the Shumla Archaeological Research & Education Center, the Alexandria Project does not aim to physically preserve the Lower Pecos rock art. Instead, archaeologists use high-tech methods to capture every aspect of the murals, creating records that will endure even if the originals fall prey to rising water levels, vandalism, or something else. It’s a daunting effort, especially because additional sites continue to be discovered. Due to drug-related violence on the Mexican side of the Lower Pecos, the Alexandria Project is currently only able to work on sites in Texas.

In the Lower Pecos, most rock art sites occur on privately-owned lands. While many landowners have cooperated with the Alexandria Project and its efforts, they do not open their sites to the public. However, several caves are accessible to interested viewers. For example, the Witte Museum now owns and conducts tours of the White Shaman Preserve. The museum has long been involved in the excavation and scientific study of the Lower Pecos. It owns many artifacts from the region and has galleries dedicated to the People of the Pecos. In Seminole Canyon State Park and Historic Site, visitors can enjoy tours of the Fate Bell and Fate Bell Annex rock art sites, Meanwhile, Parida Cave and Panther Cave (two more famed sites) are available in the Amistad National Recreation Area.

Despite not being nearly as old or well-known as caves like Lascaux and Chauvet, Lower Pecos rock art represents a fascinating look into the lives of ancient North Americans. It deserves to be much better celebrated than it has been up until this point.

Angeleti, Gabriella, “Archaeologists rush to record the Rio Grande’s art amid threat from flooding and drug cartels“, The Art Newspaper, 10 May, 2021. Accessed 12 Aug 2021.

Our prehistoric ancestors moved around a lot. It was a short and brutal life back then – you needed the protection and guidance of your gods and...

It seems that forming figurative shapes out of natural materials has always been with us. As humans developed, a bigger, more sophisticated brain...