10 Awesome Pairs of Shoes from the Victoria & Albert Museum 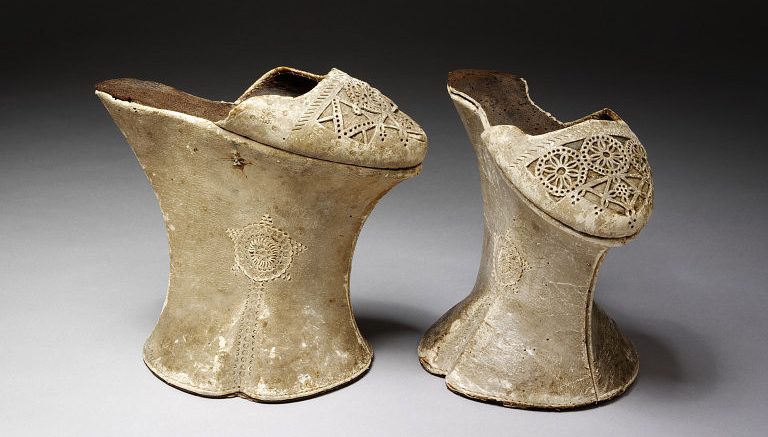 Victoria & Albert Museum in London is a hoarder’s dream. They have unrivaled collections of everything you can think of, one of them being shoes. The V&A shoe collection consists of over 2000 pairs and spans over 3000 years of history. It shows human inventiveness in protecting one’s feet, elevating ourselves above dirty pavements (and other people), as well the use of materials. It also shows some commonalities in shoes across centuries, many of them a result of the unchangeable function. Let’s take a look at 10 awesome pairs of shoes from the Victoria & Albert Museum. Would you like to try wearing any of them?

These may not be Cinderella’s glass shoes but are still quite impressive if you consider that they’re made of earthenware. The bright background is quite typical of French pottery and porcelain from the 18th century (for some prime examples google “Sèvres porcelain“). Various colors were used, blue, turquoise, and green primarily, but you can also find yellow or orange backgrounds as well.

Also these shoes are liberated from our obsession with having only identical pairs (like the endless arguments about socks). Both are decorated with landscapes, but they are not the same. On the right shoe we see figures next to a bridge over a stream. Meanwhile on the left we see fishermen and a river with boats.

This is a modern and quite an extreme example of geta. Geta are traditional Japanese footwear, similar to elevated flip-flops. Typically geta would only have two “legs.” The ones you see here are inspired by koma-geta. They were worn by oiran, the high ranking courtesans in the feudal period in Japan. Koma-geta had three “legs” and were lacquered. This pair is made even more stylish by the red soles, they remind me of Louboutins.

Various types of geta distinguished a person’s social rank, but their purpose was actually very practical. They were designed to lift the wearer’s feet above any dirt found on the road or pavement and to protect their clothes from splashes of dirty water.

So Cute and So Cruel

Staying in the far East, let’s move to China. Many of you have heard of the painful and cruel tradition of foot binding. These shoes were made for bound feet, hence their unnatural shape. They are made of silk, which again brings to mind the amazing variety of materials that shoes can be made of. They also have fabric covered soles indicating that they were meant to be worn indoors.

Such shoes have various names in Chinese, in English they are typically called lotus shoes. They were considered a representation of beauty, sensuality, cultural identity, and social status of the wearer. This is interesting if you consider that the poor wearer was crippled for the sake of showing off their beauty and social status. It is terrifying that this cruel practice only started dying out in the early 20th century. Thankfully it is no longer practiced.

Take Me to the Moon

These look pretty simple and I think I’d be tempted to try some jumping in them. The first pair of “jumping shoes” available might have been the “Kangru-Springshu“, sold in the 1920s. The US vs. USSR Space Race (1957-1969) provided a new lease on life for this fun toy. Every child at the time was obsessed with the Moon landing, so anything that could emulate the experience of walking on the Moon was guaranteed to sell fast. I wonder how many broken legs ensued?

On the other hand, it really must be fun to try, so I also wonder when a new version might hit the market. If Peloton can revive the stationary bike, there must be a niche for Moon Shoes. Maybe they could be marketed as a fitness device given how obsessed everyone is with fitness, not fun.

Also these shoes are another wonderful example of how V&A collects anything and everything that is a testament to its time. No matter how odd, if it was ‘in” at one point it’ll probably find a home in the vast corridors and warehouses of V&A.

To Wear or to Admire?

This is one of two pairs on our list by Noritaka Tatehana. He is probably best known for making shoes for Lady Gaga, but let’s leave her aside for now. What is fascinating about Tatehana’s shoes is how he rethinks their traditional shapes.

At first glance we have a pretty traditional geta, two legs, not too high. However, the rounded sides together with the image of the raven they create when put together clearly indicates they were not meant to be worn. Typically geta are very simple, made of wood, and hardly ever decorated. In this case, we have a luxurious velvet band, embossed leather, and traditional yūzen dyeing (a Japanese dyeing technique involving the application of rice paste to fabric to prevent color transfer that originated in the 17th century).

What happens when the nephew of architect Rem Koolhaas and a member of the family that founded Clarks join forces? United Nude. The brand was created in 2003 by Rem D. Koolhaas and Galahad Clark. For this pair of shoes they teamed up with the late architect Zaha Hadid. Together they designed a sculptural cantilever system allowing for a non-existent 16 cm heel. There is also an interesting combination of materials, with a leather lining and conventional inner slipper, surrounded by a rubber outer shell, and a hidden platform and heel made of fiberglass to carry the pressure.

These shoes were designed to make an impression. What’s more, their shiny surface makes them a beautiful object to photograph when the wearer moves. Clearly these shoes make a statement, even if their price is eye-watering.

We Don’t Need the Middle Part

Let’s take a look at another gravity-defying pair. Again, we have an architect experimenting with the construction and support challenges of shoe design. Julian Hakes designed these in 2015. He perceives fashion as architecture for the body and clearly approached this challenge from that angle. If you look closely you’ll notice that the shoe does not have a footplate. The only points of support are under the heel and the ball of the foot.

Basically these shoes consist of a single piece of carbon fiber that wraps itself around the foot like a twist of lime peel. It must be a really interesting experience to wear shoes without the footplate.

Elevate Me… Above the Dirty Water

You know those plastic flip-flops you wear to the swimming pool? Well, this is the Turkish bathhouse equivalent, the qabqab. They were designed to elevate the wearer’s feet above the soapy, dirty bathwater on the floor of the bathhouse. This pair is missing the fabric strap on the front of the sole that would wrap around the top of the foot though, much like contemporary plastic slippers. Unlike their plastic counterparts this pair is made of wood and inlaid with mother of pearl tiles, a much classier option.

This pair was probably never worn. They were acquired in 1867 at the Paris Universal Exposition. By then qabqabs were becoming less popular due to the rising popularity and availability of private bathrooms.

Elevate Me… Above Others

Here we have a pair of chopines. This type of shoe was based on the qabqabs worn in Turkish baths. This pair is made of pine-wood, decorated with punched leather, with silk underlay. Also these shoes are not identical in either decoration or in height. Apparently this version is considered modest, more lavish ones could be over 50 cm high. Sometimes the shoes were so high that maids had to serve as crutches for the wearer. Originally chopines were a type of overshoe, hence the bare heel. They were first worn by Venetian prostitutes. Later fashionable Venetian aristocrats adopted them. This is an interesting (especially from feminist standpoint), but not uncommon pattern of transmission of fashion trends.

Now we return to Noritaka Tatehana. This insane design sums up the pursuit of elevation visible in shoe design over the centuries. It may have been happening for various reasons. Starting with practical distance from dirty pavement, all the way to social elevation, and the representation of women as fragile and not easily available. Whatever the reason, it seems we always want to be higher. These gravity-defying shoes are inspired by the sometimes vertiginously tall footwear worn by courtesans in the Edo period.

Noritaka Tatehana is trained in traditional Japanese craft techniques such as dyeing and weaving. This allows him to handcraft each pair combining traditional techniques with modern interpretation of centuries-old inspirations. This is how shoes become art and land at the V&A.