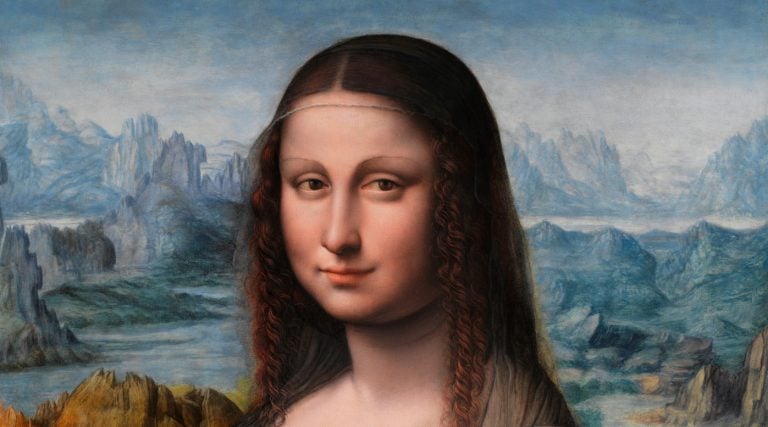 Mona Lisa is the most famous painting in the world. But did you know that she has a twin? Covered with multiple layers of dark and cracked varnish, she hung abandoned in cavernous museum basements for ages – exactly since 1819 when the Museo del Prado was founded in Madrid.

The museum assumed it was a bad 16th or 17th century copy of Leonardo da Vinci’s original, which dates back to the early 1500s. Even though the woman from the Prado painting bears an unmistakable resemblance to “La Gioconda,” she appears in front of a plain black backdrop rather than the colorful Tuscan countryside from the Louvre’s version. And that was a reason why everyone was fooled for so many years.

Everything changed when Prado’s curators decided the painting needed a face lift because it was going on loan to the Louvre. After some X-rays and infrared studies, everyone was shocked to find a beautiful landscape hidden beneath the dark paint behind the subject.

Even more shocking is that, according to the curators, the painting was actually executed by an artist in Leonardo da Vinci’s workshop at the same time as the original. Probably it was created by Francesco Melzi, one of Leonardo’s favorite pupils.

Now, the Mona Lisa‘s twin is on display in Museo del Prado in Madrid. Next time you’re going to be there don’t forget to pay her a visit -–probably it will be a more intimate meeting than with Mona Lisa in Louvre!