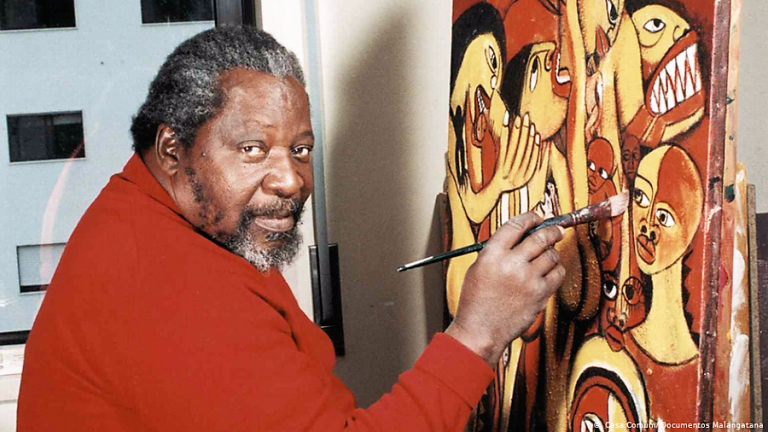 One of the most prominent African artists of the 20th century, Malangatana was a multitalented artist who had many dreams. He realized them with his art, with the murals he painted on the streets of Mozambique and the exhibitions that featured his work around the world. He masterfully depicted the politics, culture, and social situation of his country through the densely packed faces that he drew in many of his works.

Malangatana Valente Ngwenya was born in the southern part of Mozambique in 1936. Towards the end of the 1950s, he took art education in Núcleo de Arte college in Maputo. He was very prolific and produced art in various forms as well as in various materials. However, from the beginning of his art career in the 1950s until his death in 2011, he somehow maintained a signature style. The artist stuck to a specific style with his unique depiction of figures, choice of colors, and composition.

To examine this further, one can easily recognize the very densely depicted figures in both his drawings and paintings, the most distinguished signature of Malangatana Ngwenya. In addition to this, the artist always used big bulging eyes to transfer emotions in his works. The very prominent red/earthy color palette in the artist’s paintings also constituted a signature feature. This reminded the viewer of the red and dry soil of Mozambique as well as the bitter feelings of Mozambican people under colonial rule. To study Malangatana’s art further, it is a good idea to examine his works based on a few recurring themes.

Main Themes in His Works

The artist was born during the Portuguese colonial rule in Mozambique and he witnessed the independence of his country in 1975. Imprisoned for 18 months because of his support of/involvement with the independence forces, Malangatana was very productive in his work both during and after his sentence. Several works of the artist featured representations of colonial forces as oppressors, common people being forced to work under these forces, war scenes, chaos, and tumult. Until his later years, the artist kept on creating works about the concepts of fear, hope, and independence.

For Malangatana, his art was a suitable medium for promoting the rich culture of Mozambique. After the independence of Mozambique, the artist traveled to different parts of the country. There, he observed the culture, got in contact with the local peoples, and painted murals in public spaces. The murals featured typical scenes from daily life in Mozambican towns such as women carrying baskets on their heads and people hugging and talking to each other on the street (and having long conversations). Thus Malangatana depicted and promoted his customs and practices in his art, as he advocated that Mozambican culture and art did not lag in advancement as was thought in some circles in the West.

Another theme that inspired Malangatana’s work was mental/emotional complications that he and his family had to face. Artist’s mother raised the young Malangatana mainly by herself. That is why she suffered mental problems throughout her life which inspired many of Malangatana’s works. As the artist stated, the primary education that his mother gave him at home, as well as her mental destabilization later in her life, granted Malangatana a very special type of awareness. In many of his works, he portrayed lonely, angry, and concerned female figures that can be understood as interpretations of his mother’s image.