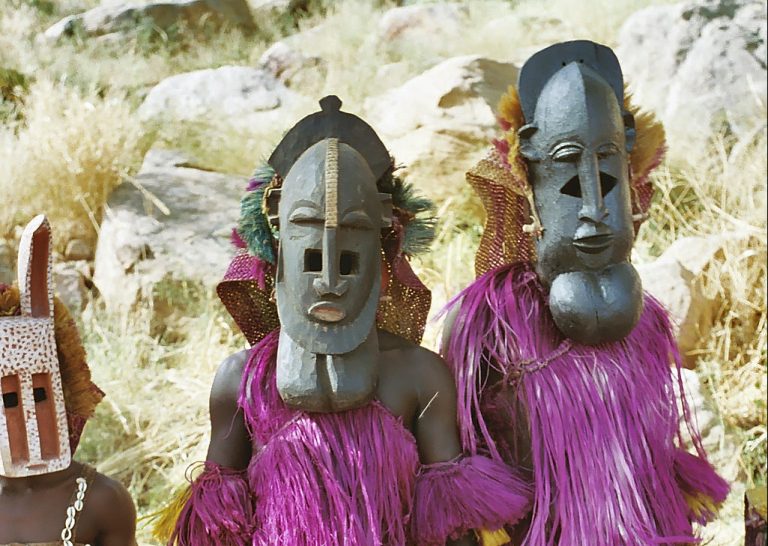 African art and culture had been a driving inspiration to European modern artists like Pablo Picasso, Paul Gauguin, and Amedeo Modigliani, among others. The appealing factor lies in many raw, visual, fetishized pursuits and compelling cultural narratives. Dogons originated for the first time from the West bank of Niger around 1490 CE, as Mossi people. Their art is known for masked performances, figural sculptures, architecture, and cosmology.

Who Are the Dogon People of Africa?

The Dogon people of Africa originated for the first time in ancient Egypt where they traveled from the Mande Kingdom. They had settled by the side of sandstone cliffs within the Bandiagara Escarpment during the 15-16th centuries. Escaping from the encroaching Islamic rulers, they found solace in the terrain. With the bluffs at 1600 feet tall (487 m) and 90 miles long (144 km), these cliffs possess numerous caves. The place served as the perfect location to hide from enemies.

Dogon is popular due to ancient tales based on human beings as well as extraterrestrial contact. According to the legend, the race was known as Nommo, which appeared from the brightest star, Sirius. Arriving on Earth, they shared information about cosmology and the solar system. All these creatures were also part of Babylonian and Sumerian myths.

Most importantly, before Galileo, it was Dogon who knew planets and stellarium facts. They were the ones who identified Jupiter’s moons and Saturn’s rings. They also knew the fact that the sun is at the center of the solar system.

The religion of Dogon is generally based on oral traditions, which vary among Dogon clans. It has been investigated that Nommo is the creator who came in the spaceships from the sky. Hence, according to the ancient belief, they shall return to their planet someday.

Dogon is based in three main sections and each one of them incorporates mask making. This includes:

Dogon used numerous masks in the dama rituals. Generally, they represented different objects, characters, animals, or abstract concepts. Kanaga is the most popular Dogon mask. The whole shape of the Kanaga has layers of different meanings.

While performing, Kanaga dancers jumped up and then arc down the mask to touch the surface of the ground. This action represents Amma, which means giving life by representing God, the creator.

6 Contemporary African Artists You Should Know

The contemporary art scene is booming in Africa. Artists are getting more attention and recognition, taking part in the most prestigious art fairs...