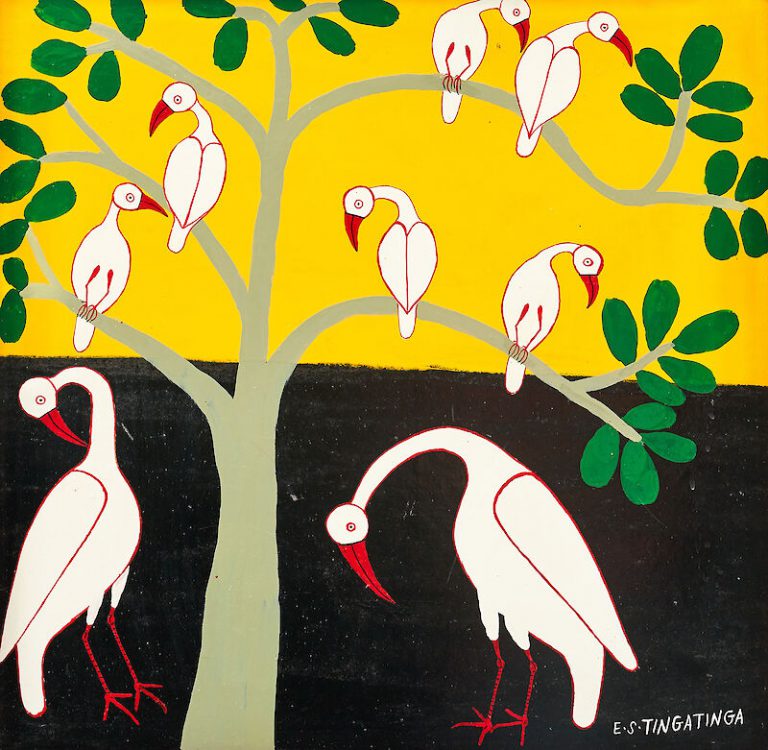 Around the World with the National Portrait Gallery: Africa

Tingatinga is an art form specific to Tanzania. It originated in the works of a painter whose name was lent to the entire artistic movement. Edward Tingatinga (1932-1972) began painting animals and plants around 1968, using materials such as bicycle paints.

His paintings were soon recognised for their surrealist appearance and naive style, similar to the works of Henri Rousseau. When Edward Tinagtinga died only four years after he began painting, in 1972, a whole series of artists partook in his artistic legacy and maintained its popularity to until the 1990s, when new directions emerged within this very popular style.

There is still controversy concerning the sources of inspiration employed by Edward Tingatinga. Many of his followers claimed it was an original view of art, but scholarly research couldn’t overlook the similarity between the painter’s works and African rock drawings and other forms of traditional artistic expression.

Nevertheless, it couldn’t be denied that Tingatinga painted during a period in which it was important for artists to tap into sources of inspiration which brought forward the inward expression of African cultural specificity.

Tingatinga started painting only seven years after Tanzania gained independence and, like any other nation, the country needed artists and poets who could help shape and confront its individuality with that of the former Western colonial powers. During the 19th century in Europe, when many countries gained independence, national poets and painters emerged, who were considered to delineate the best of the ‘national spirit.”

Tingatinga probably acknowledged the important role his paintings played in the new cultural atmosphere of the 1960s. This could be the meaning of his effort of perpetuating his artistic manner by teaching students, including his half-brother Simon Mpata, who later did the same thing and brought Tingatinga art to the present day, as a form of autonomous painterly style.

It may be paradoxical that he attained fame and the means to work full-time as an artist due to the fact that his works were favored by Europeans living or visiting Tanzania. This was due in part to curiosity, in part to the popularity of primitivism among modernist painters, and in part to the fact that Tingatinga’s naive manner was universal, so that anyone could relate to it, in one way or another.

Nevertheless, it was the way that Tanzanian contemporary painting could emerge as an artistic form of its own kind and that there were other manners of doing art on different continents. With Japanese art opening to Western culture, African art was another important revelation of the 20th century.

The Use of Materials as a Social Commentary

When he first started painting in 1968, Edward Tingatinga used materials such as masonite squares, ceramic fragments, and bicycle paint. This was most probably due to the fact that he didn’t have the funds to use other materials, but another dimension could be added to this practice.

It could come across as a means of indirect commentary about the situation of Tanzania in the wake of independence. Using such disparate materials, beyond the personal propension of the artist towards experimenting, could question the status of the artist during uncertain times.

In another sense, this use of materials could also point to traditional African art forms, in using the available natural sources in interesting ways, such as the Sudanese basket trays weaved of natural plant fibre. Even though Western artists had already incorporated elements of African art into their works during the first half of the 20th century, Edward Tingatinga’s paintings detached themselves decidedly through the way he created them.

Tingatinga’s choice of subject could also point to indirect remarks outside the realm of art. His painted mostly representative African animals, although his followers broadened the scope of subjects and inclined more toward the decorative character of their works. This limitation on the part of the founder of the Tingatinga art movement could be read in two ways.

The first could be that Tingatinga considered animals as the most representative element of his country and continent, because the lives of people in Africa mingle, maybe more than in other parts of the world, with those of fauna. Another interpretation could be that of critique towards Western admirers of his works, who maybe weren’t considered to be able to understand the African expression comprised of more complex subjects.

Be that as it may, Edward Tingatinga’s works still awe on-lookers today, because of their atemporal air, despite their less decorative look compared to later interpretations of the Tingatinga art manner. If you want to find out more about art in Africa in the 1960s and 1970s, you can check out this article about an important filmmaker, Djibril Diop Mambéty.