Madame Grès, The Sphinx of Fashion 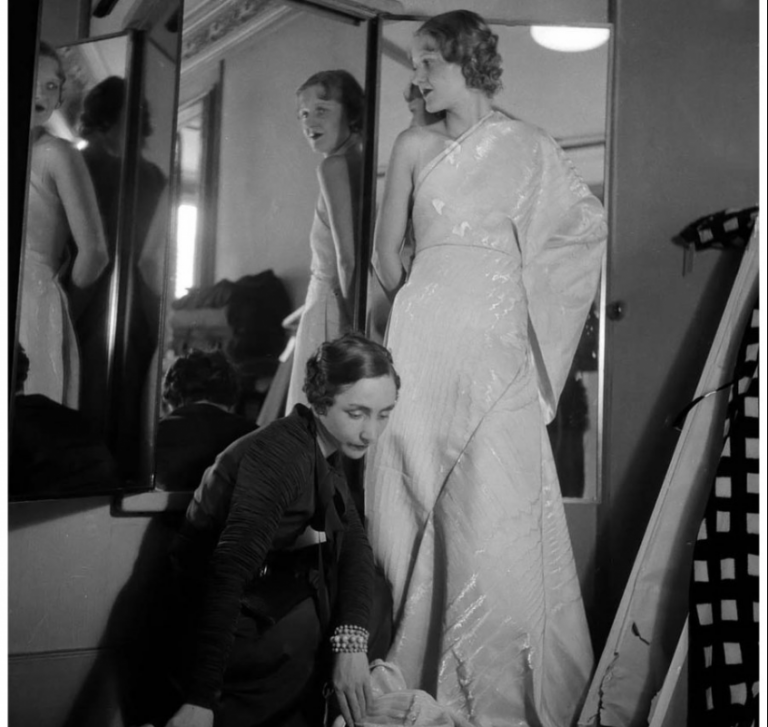 During the 1930s, fashion was heavily influenced by ancient Greece. In the previous decades, there was an appreciation through patterns such as the meander and the Greek key. But during the 1930s, the couturiers returned to the long evening gowns that transformed their clients into Greek statues. It was under these cultural influences that Madame Grès flourished as an haute couture designer. She refused to speak about her technique and concealed her personal life from the public eye. That earned her the nickname “The Sphinx of Fashion”.

She was born in 1903 and raised in Paris as Germaine Emilie Krebs. Krebs studied painting and sculpting. She wanted to be a sculptress but her parents had many objections. So, she switched her interests to fashion, where she was able to apply her sculpting techniques and create her signature look of floor-length draped Grecian goddess gowns.

In 1932, Krebs opened her first haute couture house, La Maison Alix. In 1933, she combined her name with her coworker’s, Juliette Barton, to create the name Alix Barton but she dropped it in the next year. Her fashion house remained La Maison Alix until 1942. During these years, Krebs found her signature style of classical drapery and elegant gown dresses. At the same time, Krebs, or Alix, became known for designing her garments directly onto the models.

Her early works had ancient Greek influences, simple lines, and were made with great respect to the female body. Alix’s preferred mediums were silk jersey and paper taffeta. She gained her first acclaim in 1935 when she designed the costumes for Jean Giraudoux’s play, The Trojan War Will Not Take Place. After that, she became one of the leading designers for many notable figures: the Duchess of Windsor, Paloma Picasso, Grace Kelly, Marlene Dietrich, and Greta Garbo.

In 1942, Krebs married Serge Czerefkov, a Russian painter. It was then when she changed her name to Madame Grès, a partial anagram of her husband’s first name.

During the occupation of Paris by the Nazis, the German forces demanded that Madame Grès design less stylish and more utilitarian clothing. However, she refused. She continued designing clothes, that even followed the pattern of the French flag. The Germans ordered the closure of her fashion house, under the excuse of her using excessive fabric in times of war. So, Madame Grès fled to the Pyrenees, where she stayed until the liberation of Paris.

The Return of Madame Grès

In 1944, she opened her second fashion house, under her signature name this time. During the 1940s, she constructed and perfected her most notable garment, the Grecian gowns. One dress could take up to 300 hours to complete. Each pleat was made by hand so that the body would shape the dress, not the opposite.

In the 1950s, she experimented with simpler lines and cuts and used ethnic traditions such as saris, kimonos, and serapes for inspiration. She also created some women’s suits. Nevertheless, the main focus throughout her career always remained the couture gowns. In 1959, she launched her fragrance, Cabochard, which translates as “stubborn”.

During the 1970s, she drew her attention to the naked flesh by making vertical peek-a-boo openings in the bodices. The next decade, she launched her first two ready-to-wear collections in collaboration with the designer Peggy Huynh Kinh.

In the late 1980s, Madame Grès retired. Her last garment for the house was a swelling bodice garment ordered by Hubert de Givenchy in 1989. After her retirement, The House of Grès suffered. Madame Grès lost all of her fortune and lived in poverty. It was thanks to her friends, Hubert de Givenchy, Yves Saint Laurent, and Pierre Cardin, that she managed to rent an apartment in Paris and continue sewing garments for friends.

In 1993, her daughter, Anne, moved her to a retirement house in Toulon, where she passed away later the same year. Anne concealed her mother’s death and forged her handwriting in documents. She made her death public one year later.

Due to her sculptural dresses, Madame Grès always fascinated curators. The Museum of FIT threw her an exhibition in 2008 and in 2011 her work was shown at the Musée Bourdelle in Paris. In 1994, she was the focus of a monographic exhibit at The Met.

She is credited with convincing Cristobal Balenciaga to open his couture house, but her lasting legacy was Azzedine Alaia. Even though their aesthetics were different, their silhouetted were distinctive and sculpturesque. In general, there is a mystery around Madame Grès. She was a very private person. Sher never talked to anyone about her techniques. It is impressive how her works consist of so many intricate tucks, folds, and pleats. As she stated,

“For me it is just the same to work with fabric or stone.”

Her looks were timeless, as she kept creating similar pieces. Her sewing skills were unparalleled to the degree that her own atelier workers had trouble dating dresses in the archive.