The Artistic Inspiration of Balenciaga 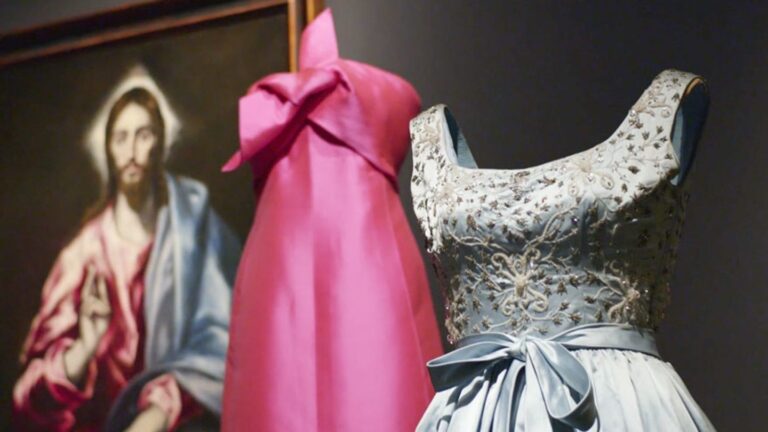 From the exhibtion at the Museo Nacional Thyssen – Bornemisza. Photo: Christie’s.

Cristóbal Balenciaga was the “Master of us all,” as Christian Dior said, and a “couturier in the truest sense of the word,” according to Coco Chanel. The world was devasted when he passed away in 1972. He was an enigmatic figure who prefered to stay away from the spotlight. He redefined the concept of haute couture and made everyone delirious with his innovative designs. On the occasion of the past exhibition at the Museo Nacional Thyssen – Bornemisza, let’s take a look at the artistic inspiration of Balenciaga.

Cristóbal Balenciaga was a special figure in the fashion world. He designed his first gown at the age of 12. He soon excelled as a couturier for the royalty and aristocracy of Spain. However, at this early stage, there wasn’t any reference to Spanish art whatsoever. After the beginning of the Spanish Civil War (1936-39) and General Franco’s dictatorship, Balenciaga moved to Paris. It was then that he expressed a nostalgia for his mother country. He thus started incorporating references from Spanish art into his designs. There are 8 major references to Spanish art in the artistic inspiration of Balenciaga:

Leaving aside the debate about El Greco‘s nationality, he was one of Balenciaga’s major inspirations. One of the things that El Greco is known for is his use of vivid colors. The vibrant colors penetrated Balenciaga’s mind and imagination. For example, he took the vibrant yellow of the archangel Gabriel from The Annunciation and created a beautiful mustardy evening gown from silk organza.

Likewise, he created another beautiful evening dress from silk, in a bright pink inspired by another Annunciation of El Greco.

Balenciaga was fascinated by Goya‘s ability to illustrate the fabrics in full detail. Goya painted in such a manner that one could see the transparency of textiles such as lace, trimmings, tules. Balenciaga became obsessed and began to use them in his designs.

Another possible influence of Goya is Balenciaga’s inclination for separating a flowing shape with a strong line. An example of this is Goya’s portrait of the Duchess of Alba, whose dress is separated by a red belt tied around her waist. Balenciaga created a very similar one.

The works of Velázquez also had a major impact on Balenciaga. What caught Balenciaga’s attention was the shape of Velázquez’ dresses. Actually, that is how he was came up with the Infanta dress in 1939. He reinterpreted the shape by creating a narrow skirt and a less exaggerated shape.

Zurbarán is known mostly as a religious painter. As the “first fashion stylist of art history”, according to curator Martínez de la Pera, he painted portraits with outfits that today could be on the catwalk. Balenciaga skipped the holiness and paid attention to the clothing. He really liked the voluminous skirts and he recreated them in his own version.

Moreover, Balenciaga was fascinated by the way Zurbaran painted his monks with lustrous ivory clothes. When Franco’s granddaughter, Carmen Martínez Bordiú, and Queen Fabiola of Belgium reached out to him for their wedding dresses, Balenciaga created masterpieces.

Balenciaga was a very religious man. So, it is no surprise that when he came across the Spanish court paintings of the 16th and 17th century, he was enchanted. The deep black of the women’s dresses, depicted in paintings of holiness, became one of Balenciaga’s distinguishing features. In the 1950s, he gave a twist to the austere dresses, giving them an unholy personality, with feathers, sequins and capes.

Another major part of Spanish culture is the flamenco dance. Balenciaga thereby made several pieces that were very similar to flamenco dresses, but he always added his personal touch. The dresses, designed in the 1950s and 1960s, have the typical flamenco skirt, which has ruffles and is either open or shorter at the front and closed or longer accordingly at the back. This pattern can be found even in recent designs of the House of Balenciaga.

Bullfighting was also a part of the Spanish tradition from which Balenciaga drew inspiration. His hats and certain boleros were in accordance to the tradition of the matadors. The difference is that the Balenciaga ones are fringed, tasseled and they have sequins. In addition, the bullfighting concept is present in recent runways too.

Beautiful and chic flowers from the still-life paintings of the court bloomed in Balenciaga clothes. Balenciaga applied them on evening coats or embroided them in evening gowns, using silk thread, sequins and shiny beads.

*all the mentioned pieces are a general reference to the artistic inspiration of Balenciaga, they are not all from the exhibition at the Museo Nacional Thyssen – Bornemisza.