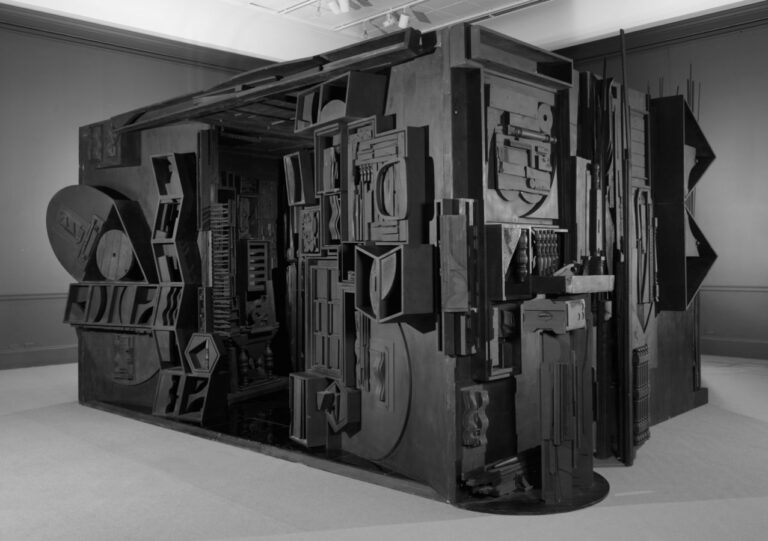 Nevelson (1899 – 1988) is recognized as one of America’s most innovative sculptors. Her most famous outsized sculptures were made of cast-off wood parts (basically street throwaways) which were transformed into completely different objects by monochromatic spray paint. Although they seemed rather abstract, in reality, they were meant to tackle themes related to Nevelson's complicated past (like emigration, a love affair with Diego Rivera, a divorce) and her fractious present.

Always being the 'Other' 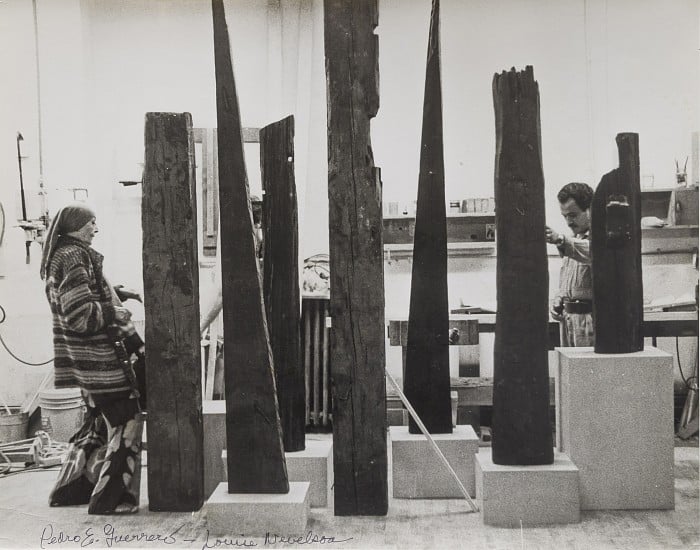 Estate of Pedro E. Guerrero, Louise Nevelson with Salvaged Wood Sculpture, 1978, source: edwardcella.com[/caption] Nevelson’s sense of selfhood was a force that propelled her work and it might have been caused by her never fully comforted uneasy feeling of “otherness”. As an Eastern European emigrant to the United States, she never really felt she belonged anywhere: born Leah Berliawsky in nowadays-Ukraine, Nevelson was taken to America in 1905 by her parents. Yet, unlike the majority of Jews who moved to urban centers, Isaac and Minna Berliawsky settled in Rockland, Maine. Louise never fully managed to assimilate into the chaste New England community and her most important goal was to leave Rockland and live in New York City. When she was 19, she met a Jewish cargo ship owner, Charles Nevelson whomade her dream possible: the two married two years later and moved to New York. Yet, they were happy for a very short time... 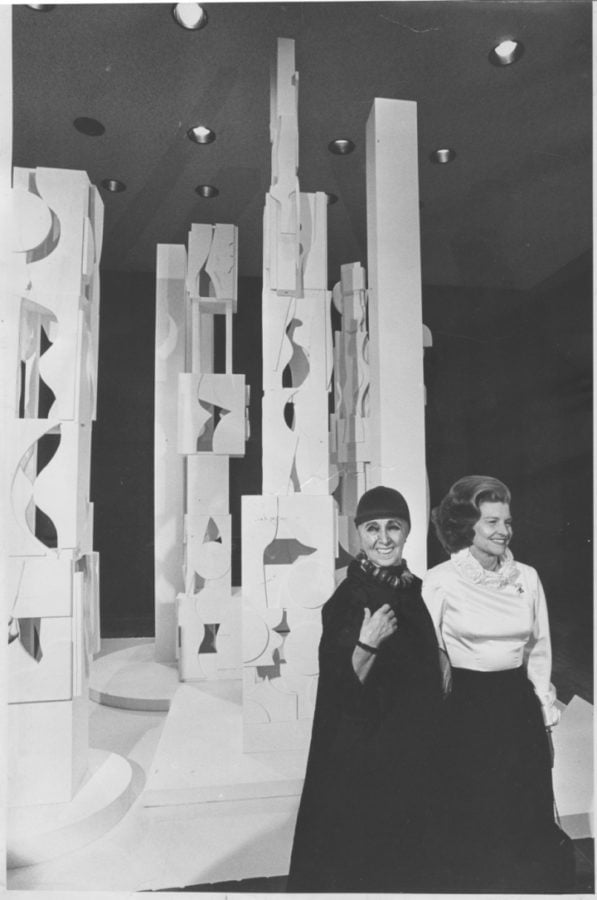 First Lady Betty Ford and Louise Nevelson standing with “Bicentennial Dawn”, 1976, (Artwork © 2016 Estate of Louise Nevelson / Artists Rights Society (ARS), New York, photograph by Al Schell for the Philadelphia Evening Bulletin, © Temple University Libraries, SCRC, Philadelphia, PA)[/caption] Charles didn't understand Louise's passion for art and subsequently forbade her to practice it. She fell into depression and it was her mother who helped her leave Charles and pursue her dreams by promising to take care of her newborn son Myron Nevelson. Louise separated from her husband in 1931 and began to seriously develop her art. She travelled to Europe and studied sculpture. On her return to New York, she met Diego Rivera and worked as his assistant on the mural Man at the Crossroads at Rockefeller Plaza. The two had an affair (why am I not surprised, Diego was quite a character) which caused a rift between Nevelson and Frida Kahlo, whom Nevelson greatly admired. 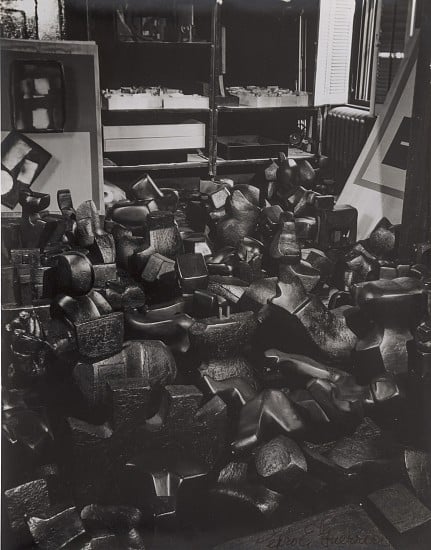 Estate of Pedro E. Guerrero, Found objects in Louise Nevelson's NY house, 1978, source: edwardcella.com[/caption] In her monumental narrative installations made of carefully arranged wooden debris, Nevelson mirrored the artistic processes of Marcel Duchamp whose "readymades" and "found object" sculptures Nevelson studied in her early career. However, it took her years to attract the attention of critics and public who were not interested in a female artist. Why? Because the most dominant trend in those years was Abstract Expressionism, which was a highly masculine movement. Seeing a young female who claimed to be brilliant was too much for the misogynist art environment of the States. Yet, Louise steadily kept on working. Her perseverance can be linked to a prophecy that her parents heard when she was born: 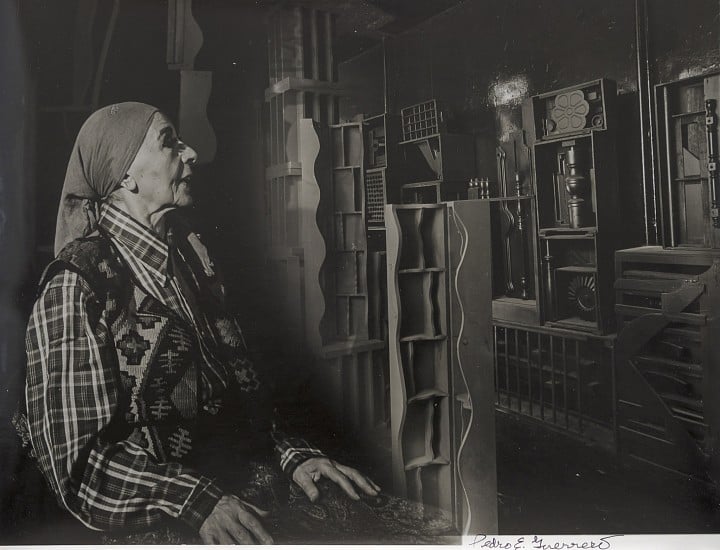 Estate of Pedro E. Guerrero, Louise Nevelson in her NY studio, 1978, source: edwardcella.com[/caption] This child is destined for greatness, the famous writer of Yiddish tales, Sholem Aleichem declared when he saw baby Louise. Not surprisingly, this prophecy became legendary and let Louise believe in eventually achieving a success. Her colourful persona, which some believed was just a marketing tool to get her work sold (in the '30s and ’40s she became known as “The Hat” because she wore gorgeous chapeaux — sometimes stolen, when she was broke, and sometimes given by lovers in exchange of favors), was in reality a coping tool she had taken after her mother, who had hidden her pain at the lack of social acceptance in their new homeland behind a façade of expensive and elegant outfits in the latest fashion. Louise, in turn, hid her numerous rejections of art galleries owners with a  cigarillo on her lips, three layers of false eyelashes, heavy jewelry, a chinchilla coat and stunning headdresses. 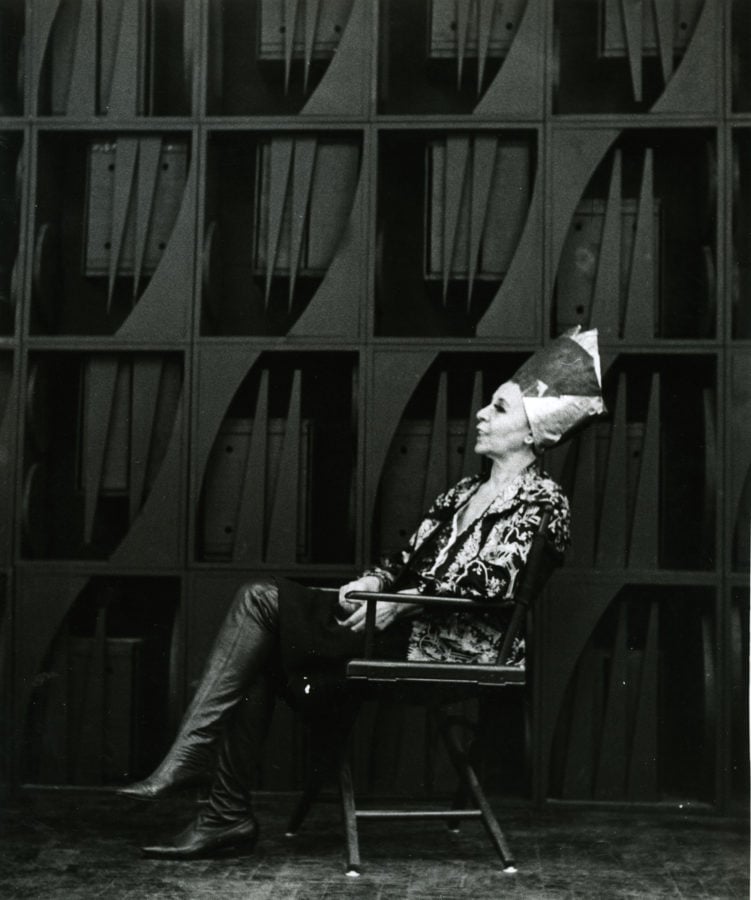 Jeanne Bucher Jaeger, Portrait of Louise Nevelson, Source: jeannebucherjaeger.com[/caption] And she finally made it! The Martha Jackson Gallery in NY gave her a solo show, she presented at the Venice Biennale in 1962, while Princeton University commissioned her to create a monumental outdoor steel sculpture in 1969. More commissions and acclaim were to come in the next years. Her career sped up and Louise was finally free and successful.

Ready for a rollercoaster ride through the world of color field painting? Strap yourself in, it’s going to be a long and wild ride! This [...]

Her career lasted barely 20 years, but Joan Eardley left behind a huge cache of monumental seascapes and poignant portraits which are loved across [...]

When we think of a meander we usually think of a winding riverbed of Meander River in Asia Minor or an ancient decoration of broken lines that is [...]

When you say Rothko, you think of large paintings of colorful rectangular form with frayed edges, horizontal, sometimes vertical as well, floating on [...]