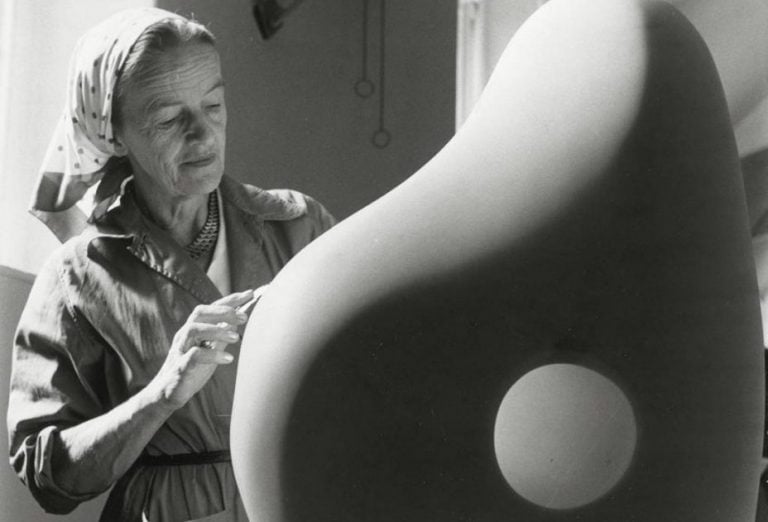 How Louise Nevelson Constructed Her Sculptures and Her Past

Made up of six parts, Conversation with Magic Stones is in conversation with itself, with us, and with its surrounding landscape. Because it is bronze-cast, Conversation with Magic Stones is not a one-off sculpture – four identical castings exist. Dispersed across the world, one copy is in a private collection in Switzerland, another is at the Scottish National Gallery of Modern Art, one sits on the campus of Trinity University in San Antonio, Texas, and the artist’s copy is owned by the Tate Gallery in London.

Bronze Casts Around the World

Bronze-cast works are reproducible because their creation process involves a mold. Although identical copies of Conversation with Magic Stones exist, they are individualized by the space they occupy and the unique mythic character they invoke.

Created in the last few years of Hepworth’s life, the sculpture consists of three tall, vertical forms which the artist described as “figures,” and three squatter, horizontal forms which she described as “stones”. Hepworth’s description of the vertical forms as “figures” suggests their anthropomorphism. Conversely, the identical eight-sided polyhedron “stones” could almost be mistaken for actual carved stone; Hepworth convincingly made what was once a liquid material look like organic rock.

The equal number of anthropomorphic figures and fixed stones balance the sculpture. For each figure, there is an accompanying stone. With each part’s distinct attributes in mind, the six parts of the sculpture interact in a unified conversation amongst themselves.

We as viewers are also included in this conversation – we can disrupt, confuse, and add to it. Hepworth would have wanted viewers to circumambulate, walk through, and even climb on the sculpture. The interactive possibilities and new perspectives are endless as the conversation is extended out to the viewer.

The stones create their own space that you must enter into for the conversation to be whole. The “conversation” mentioned in the title of the work is ambiguous and abstract, however, in one sense, this is a conversation about space: how a human relates spatially to the sculpture and how parts of the sculpture interact with each other.

For Dore Ashton, writer, professor, and critic on modern and contemporary art, Hepworth’s Conversation with Magic Stones satisfies the desire for an origin story:

The stones I find in Hepworth – whether the bronze analogies in Conversation, or real stones – are nearly always the bones of the Earth Mother, carrying their ineffable message of origin. They subsume all of our longings for beginnings; for truths that escape pragmatics.

In my mind, Conversation with Magic Stones, in conjunction with its various settings and its adopted myths, evokes a sense of knowledge — possessed or (more often than not) unpossessed. The stones have answers, although they tend to conjure up more questions. Nevertheless, the sculpture contains power in the hidden wisdom of its parts.

Ashley Allen is currently completing a BA in art history at Trinity University in San Antonio, TX. After graduating in 2022, she plans to pursue a career in art journalism — she hopes her words can help others appreciate art and explore new concepts.

You can find Ashley on LinkedIn.