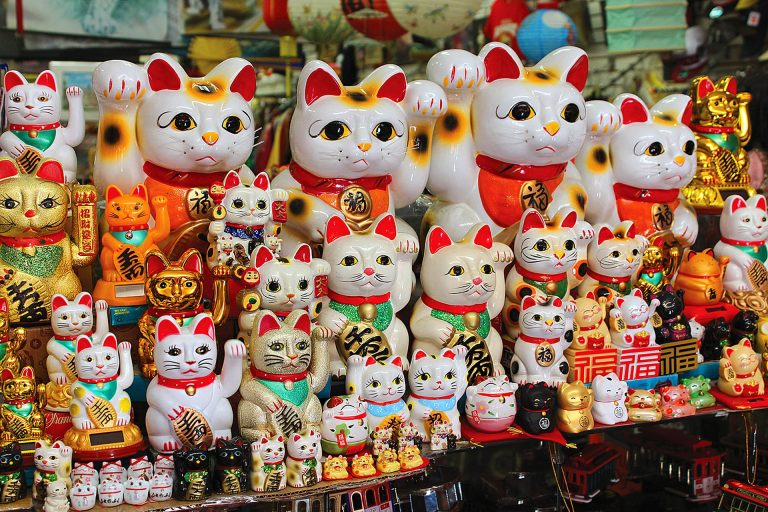 We’ve all seen those jovial, happy cat figurines in Asian restaurants and shops. Sitting upright with their raised paw, smiling face, and trademark bell and bib, Maneki Neko (in Japanese 招き猫, “beckoning cat”) have symbolized all kinds of luck and good fortune for over 400 years. Their slightly mysterious origins just add to their mystique and charm.

These feisty little creatures originated in Japan’s Edo Period (1615-1868). This was a time of great prosperity in Japan. Cats were a symbol of the growing and wealthy merchant class and higher society. There is no agreement on the story of their origin. However, the stories always involve a cat saving a priest or a merchant’s life or livelihood, bringing them great prosperity and rewards with their charm.

How the cats were made into figures came from the story of an old woman who was so poor that she had to sell her beloved cat. After selling it, the cat visited her in her dreams and told her to make its image in clay to sell and earn lots of money. She did and thus became very successful.

With the wealth and self-sufficiency amassed during the Edo Period, Japan became quite isolated from the rest of the world. The powerful merchant class culture created an increase in the sex industry with prostitution and brothels. These sex shops displayed lucky talismans in the shape of penises, which look remarkably similar to the Maneki Neko. The Meiji Period (1868-1912) followed the Edo, and Japan opened itself back up to doing business with the Western, more conservative, Christian world. The phallic charms were banned and subsequently, there was an increase in the displaying of the cats.

Maneko Neki were originally made of wood, metal, porcelain, or cast iron. These days you can find them in all sorts of materials, especially plastic, and in a rainbow of colors. The colors are a key part of their luck with each representing something different. For example, black wards off evil, red or green bring good health, yellow/gold denotes wealth, pink invites romance, and white is happiness. Calico is considered extremely lucky since it combines several colors.

Western viewers mistakenly see the raised paw as a waving gesture, when in fact, in Japan, this is a movement of beckoning. A raised left paw ensures more customers for a business, while a right paw means more money and wealth.

The Gotokuji Temple in Tokyo lays claim to one of the original legends of the Maneki Neko. One story tells of a poor monk who could scarcely afford to maintain the original temple. Hence, his beloved cat beckoned traveling samurai from a rainstorm to seek shelter, lodgings, and to learn the teachings of the monk. The samurai were so impressed that they donated goods and funds to the monk. Another tale has the lucky cat saving a feudal lord from a thunderstorm. The lord then built the temple as an act of gratitude. To this day, tourists and guests visit the temple by the thousands, leaving behind Maneki Neko to grant their wishes.

Maneki Neko’s colorful history just makes them more charming and endearing. These days you can find the cats in all shapes, sizes, and forms. There are keychains, calendars, bands, air fresheners, pots – pretty much anything. Now that the holiday season is here, they would make an excellent and welcome gift. And with the new year upon us, who doesn’t want a little more luck and good fortune?