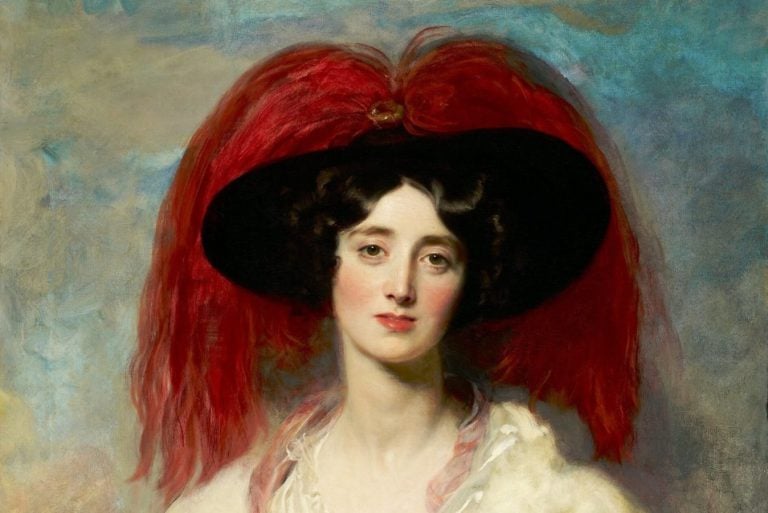 When I saw the portrait of Julia, Lady Peel by Sir Thomas Lawrence in the Frick Collection, I was intrigued by the artwork. There is a discrepancy between her gentle expression and the flamboyance of her costume. Yet she is both confident and charming. Is she an actress, a model, or a royal personage? In celebration of DailyArt’s collaboration with the Frick Collection during July, let’s explore the history of the painting and the life of this wonderful lady.

Along with Julia, Lady Peel, the Frick Collection has masterpieces of western painting, sculpture, works on paper, and decorative art. The museum is in New York in the former estate of American industrialist, Henry Clay Frick (1849–1919). Through his good judgement he earned enough money to build an art collection, which he later bequeathed to the public along with his house. Now the museum boasts a unique domestic atmosphere.

Hardworking from an early age, Thomas Lawrence (1769–1830) was a British painter born in Bristol. He was a child prodigy and largely a self-taught artist. When his father went bankrupt, ten-year-old Lawrence started to support his family by painting and selling pastel portraits. At eighteen he went to London and briefly studied at the Royal Academy Schools. Lawrence rapidly established himself as a brilliant portrait painter. He was knighted in 1815 and became the President of the Royal Academy of Arts in 1820. Embodying romantic glamour, his sitters could include theatrical stars, military commanders, or society beauties.

One of these beauties was Julia, Lady Peel (1795–1859). She was born in Chennai, known as Madras, Tamil Nadu, India. Her parents were General John Floyd, who “came of a fighting stock of cavalry officers”, and Rebecca Juliana Darke. In 1782, Julia’s father went to India to serve as Colonel. When Julia was just seven years old her mother died. She probably moved to England around this time. At twenty-five she married Robert Peel with whom she had seven children.

In 1827, when Lady Peel was thirty-two, Sir Thomas Lawrence painted her portrait. That same year her husband was knighted and would later serve twice as Prime Minister. Being an avid art collector, he commissioned no less than fifteen paintings from Lawrence of his family members and other well-known people. Subsequently, Robert Peel displayed the paintings in his estate. Needless to say, the portrait of his wife was the focal point of the picture gallery.

Perhaps, the portrait of Julia, Lady Peel was one of the most beloved. A fountain of red feathers erupts from the crown of her black, broad-brimmed, felt hat and falls to her shoulders. She looks directly at us, slightly tilting her head. Her lips are somewhat parted as if she is about to speak. With her fine, regular features, luminous pale skin, dark brown hair and eyes, and long neck, Lady Peel seems to embody refined beauty.

Furthermore, the rosy tints of her cheeks, lips, and the camellia tucked in her white satin dress are echoed by the vibrant red ostrich feathers. Gold bracelets with jewels and a succession of rings adorn her arm and hand. The blue sky and pink clouds highlight Lady Peel’s easiness. However, her ornate jewelry and fanciful costume do not match her expression and the outdoor setting.

Lady Peel wears a white satin, Empire-silhouette style gown, in which the dress has a fitted bodice ending just below the bust. Through his masterful brushwork, Lawrence emphasizes differences in the texture and weight of the gleaming satin, the fluffy swansdown, and the vaporous clouds, all in shades of white. For this purpose, he places the loose passages next to polished areas.

For example, the artist depicts the row of rings on Lady Peel’s left hand and the gold, gem-encrusted bracelets with great detail. Conversely, he reduces her right arm to a few squiggles of paint. Lawrence also refuses to define the exact contours of her scarf and neckline of her dress. With masterful briskness, he suggests the texture of the fur, giving it the buoyancy of foam.

Being a brilliant painter, Sir Thomas Lawrence could reveal the most admirable traits of his sitters and could bring out the best in them. Moreover, he felt which lines and forms constitute beauty. He must have responded not only to Lady Peel’s beauty but also to some aspects of her personality.

Lady Peel once said that she was “no politician.” However, her husband’s career influenced her life. In time, she also became the closest or his only companion in his innermost thoughts. Sir Robert Peel was a loving husband and wrote Julia many affectionate letters. We read in them:

“…from Windsor Castle…I had a melancholy journey yesterday leaving my own Julia, and all that is dear to me, behind me. I thought of nothing else but you and my little darlings [children]…You never are out of my mind, for even when the thoughts of the little ones occupy it, they do not exclude the thought of you.”

Lady Peel also had a deep affection for her husband and children. In one of her letters, for example, Julia reveals that:

“Our dear children are all around me at this moment, quite well. They often ask for dear Papa. I am a bad substitute in the drawing department. Poor little things, they are very very fond of you. I can copy for them pretty well, but yours is original, and delights them. I long indeed for the happiness of our reunion. God bless you. Believe me, ever your most affectionate and devoted, Julia Peel.”

Lawrence’s portrait of Lady Peel has the breath of life. It might be influenced by a Flemish painter, Peter Paul Rubens (1577–1640), whom Lawrence greatly admired. Rubens’ portrait of Susanna Lunden(?) could have been a source of inspiration for the painting of Lady Peel. It is a brightly colored portrait and offers a more natural approach to painting.

Lawrence is a master of the art of showing beauty in its best light. His sitters appear in the midst of actual life. It feels as if they are posing for a brief interval to allow the artist to capture their likeness. Today, the portrait of Julia, Lady Peel looks even more appealing. She is a beautiful example of a confident, charming, and successful lady that many women aspire to become.

Do you want to have a look at other famous portraits? Why not read: