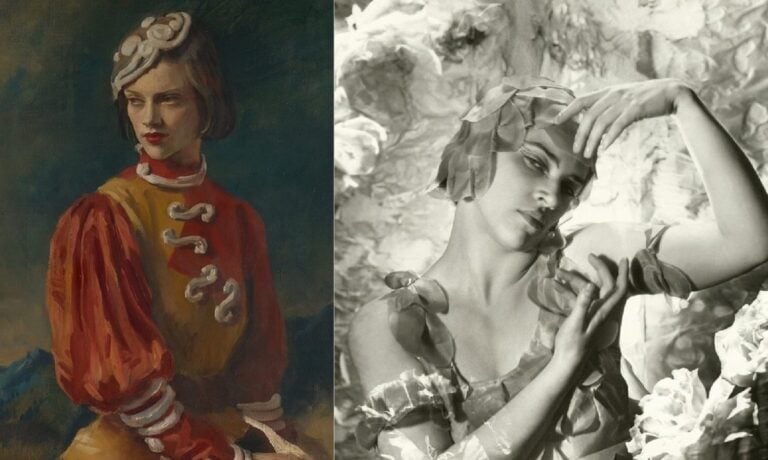 Khon – The Art of Thai Dance

Kyra Nijinsky was a Russian ballet dancer and the daughter of the famous Vaslav Nijinsky. She was painted by Oswald Birley in 1935 and we are pleased to present her to you today. Here is her story.

Kyra Nijinsky was a Russian ballet dancer and the daughter of Vaslav Nijinsky a famous ballet dancer and choreographer. He was considered one of the best in his profession of the 20th century, making choreographies for such ballet masterpieces as Le Sacre du Printemps (1913) with music by Igor Stravinsky.

Her mother, Romola de Pulszky, was a Hungarian socialite and celebrated actress. The couple met in South America when the artist’s company Ballet Russes was on tour there. The story was simple – he was a dancer, she loved the ballet – they fell in love at first sight and, in 1913, they were soon married. Romola became pregnant right away. Unusually her newly wedded husband started to have symptoms of ‘couvade syndrome’. This is a psychosomatic condition also called “sympathetic pregnancy” which causes a partner to experience symptoms of pregnancy. This led to him missing performances and unfortunately, in the end, he was fired!

Kyra was born in Vienna on June 18, 1914, just 10 days after the assassination of Archduke Franz Ferdinand, at the beginning of the outbreak of the Great War. The family began to live the life of “nomads”, traveling round North and South America on dance tours. After some years they finally settled in St. Moritz in Switzerland. However, they didn’t find the peace they had been longing for. Vaslav started to exhibit signs of schizophrenia which laid him low and eventually led to the end of his career…

Kyra, who was obsessed with her father decided to be a dancer just like him. It was said that she looked exactly like him, especially his high cheekbones and muscular physique. She even wore practice clothes exactly like a man! The relationship between father and daughter was also strong emotionally. As Romola once wrote:

It seemed almost as though they had been one person split apart, and constantly wishing to be reunited.

Kyra was trained firstly by her father and her aunt, Bronislava Nijinsky (another choreographer). Later she attended the Paris Opera Ballet School. She was a good ballet dancer, but because of her father’s fame, she was destined to be known chiefly for “being the daughter of Mr. Nijnksy”. Unfortunately, even favorable and enthusiastic opinions like that of the critic Arnold Haskell, have not changed anything:

She is a dancer who understands, whether instinctively or otherwise, how to use dancing in order to express her emotions.

The artist was always independent, intelligent, strong although many considered her strange and crazy. When she was 17 years old she lived alone in Berlin. In London, she impersonated her father in one of her most important plays – Le Spectre de la rose. Additionally, Kyra danced for Ballet Rambert and created the central role in Frederick Ashton’s Mephisto Valse.

In 1936 in Budapest, she married Ukrainian conductor Igor Markevitch (who had previously lived in a homosexual relationship with choreographer Sergei Diaghilev). The couple had one son, Vaslav Nijinsky-Markevitch. Unfortunately, the marriage didn’t stand the test of time. After the divorce, Igor raised their son alone and Kyra moved to Rome where she earned a living as a saleslady on the Via Condotti. After 1958 she lived in San Francisco and devoted herself to poetry, painting and led a solitary life. In 1981, a movie was made about her called She Dances Alone, directed by Robert Dornhelmin.

Sir Oswald Birley (1880–1952) painted the 21 year old Kyra in 1935, when her career had already started. The artist was considered one of the greatest portraitists of his day and many important members of society commissioned a painting from him One of these was Winston Churchill who, by the way, was also a painter! Check the art of the Prime Minister here). Birley not only showed the external appearance of his models, but also their emotions, characters and professions.

In his portrait of her, Kyra is depicted in one of her colorful costumes from Streamline at the Palace Theatre. At the first glance we can see the strong woman, challenging life with a bold look. Eccentric, cut like a man, brave, she was ready to conquer the dance world… Unfortunately, she never freed herself from the fame of her father and to this day her reputation remains lost in the shadow of her father’s glory…

You can see Kyra dancing here:

Art historian; she wishes she could go to the exhibition of modern art with Marcel Duchamp, take part in Tadeusz Kantor's happening or ...drink a damn good coffee with Agent Cooper.

Bauhaus is widely known for its iconic designs and contributions to the art world. What is less known is that their concepts could be applied to...