Masterpiece Story: An Experiment on a Bird in the Air Pump by Joseph Wright of Derby 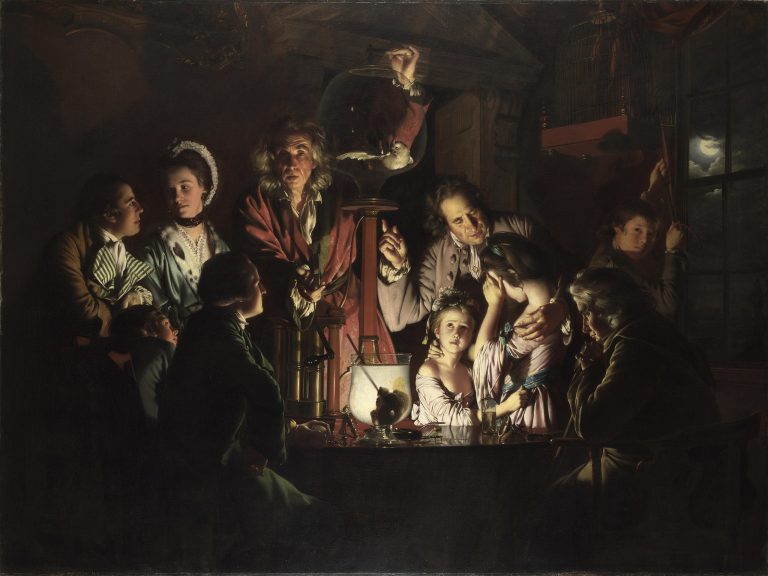 Joseph Wright of Derby, An Experiment on a Bird in the Air Pump, ca 1768, National Gallery, London, UK.

An Experiment on a Bird in the Air Pump is not only a masterpiece from the Age of Enlightenment but also a monumental artistic achievement of Joseph Wright of Derby. Completed in 1768, this is a large artwork that depicts an experiment portraying the effects of reducing the pressure of the air on the bird enclosed within.  This experiment was described by 17th-Century chemist, Robert Boyle in his landmark book New Experiments Physico-Mechanicall, Touching the Spring of the Air, and its Effects.

Joseph Wright of Derby was an English painter noted for his landscapes and portraitures. He showed an early affinity for painting that was honed under the tutelage of elite London-based painter, Thomas Hudson. Wright became known for his use of the tenebrism effect, a style of painting with pronounced chiaroscuro that emphasizes the contrasts between light and dark.

In addition to his artistic acumen, Wright had a curious mind and took a keen interest in science and natural philosophy. He was a member of the Lunar Society, a club of learned members of society located in and around, Birmingham, UK. Aside from his usual body of work, Wright utilized the canvas to depict scientific topics from the Age of Enlightenment. An Experiment on a Bird in an Air Pump from the National Gallery in London evidences an intersection between his two great passions, art and scientific inquiry.

Air pumps or vacuum pumps were a common scientific tool employed by lecturers in natural philosophy. Lecturers conducted theatrical demonstrations, sometimes for private audiences in their homes. Onlookers were enlightened as to the importance of air to living beings by the evacuation of air from the vessel within which an animal or bird was contained. The “animal in the air pump” experiments were often the centerpiece of their demonstration.

Wright illustrated a group of ten people gathered around a table with an air pump that has been rendered in exquisite detail.  Other devices and paraphernalia are scattered across a table with a varied group of onlookers. The group of spectators displays a wide variety of reactions that range from fascination to utter dismay. The couple on the left is in the middle of an amorous exchange and perhaps not as engaged in the demonstration. In contrast, the two figures that appear below them are in rapt attention of the fate of the bird.

The central figure is an older lecturer who is conducting the experiment. He looks straight out of the painting as if he is inviting participation or questions. Another participant across the table appears either lost in thought or completely engaged in the experiment and oblivious to the despair of the two young girls beside them.

The emotional reaction of the young girls in this painting is palpable. They do not share the scientific curiosity and are upset by the plight of the bird even as they are consoled by their father. The grey cockatiel contained within the vessel flutters in panic as the air is withdrawn by the pump.

The figures in the painting were never identified and there is no conclusive evidence to imply that the painting was based on real people.

Another striking feature of this painting is the unseen source of illumination located behind the glass goblet. The illumination, possibly a candle, produces strong patterns of soft but brilliant light dispersed through the bowl and contrasts with the dark shadows. A secondary source of illumination is the full moon that appears behind the young assistant who is either opening or closing the window. The moon is a reference to Wright’s participation in the Lunar Society of Birmingham.

Despite the barbaric nature of the experiment to current sensitivities, in the 18th-century context, this was a celebration of human enlightenment and advancement in the field of scientific curiosity.  It was a revered depiction that was rendered in layout typically reserved in the depiction of religious imagery or historical themes during the Renaissance. Wright utilized dramatic chiaroscuro in the manner and style of Caravaggio to highlight the subliminal aspect of his work. Wright was widely recognized by his contemporaries for his exceptional work, however, his style and subjects were provincial and were not widely imitated.

Science and the Sublime Exhibit

The Science and the Sublime exhibit is the result of a reciprocal art exchange between the National Gallery in London and The Huntington Library, Art Museum, and Botanical Gardens, in Los Angeles. Other items from the exhibit include several other artworks from The Huntington’s own collections, including Vesuvius from Portici by Joseph Wright and other rare books from the Huntington Library that contain related scientific and moral discussions.