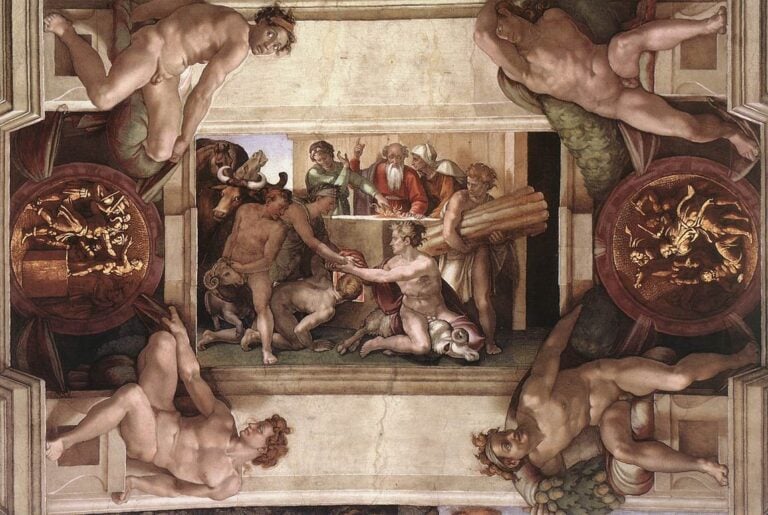 15 Facts About Sistine Chapel You Need To Know

Look no further! If you are in need of the sight of some muscular bodies this year, don’t bother going to the beach, but book yourself a ticket to the Sistine Chapel, where these hot Renaissance boys are waiting for you!

Michelangelo was a real master of muscles. And a very playful man, too: he placed these 20 Ignudi, that is ‘nude men’, right between episodes from the Book of Genesis… The only thing that has bugged scholars is: what did Michelangelo want them to represent?

Hey Girl, I’m Looking at You from My Ceiling

The heights of the Ignudi range from 150 to 180 centimetres. They are all seated on plinths and they are often wrapped in pink or yellow ribbons, or hold acorn festoons which allude to the family emblem of the Della Rovere, the clan of Pope Julius II, who commissioned the works.

Hey Girl, I Want Just You, I’m Fed Up with All These Tourists

If you are wondering why their poses are so strange; as all of them look rather uncomfortable, (well, I kind of get it, they are sitting on a cold marble plinth, and not everyone has a pillow)… Such poses were chosen on purpose to expose their tense muscles – a typical practice of High Renaissance art which later evolved into Mannerism. The idea was to show the highest craft possible in painting and also the beauty of the human body.

Hey Girl, I’m Too Muscular to Scratch My Own Back

Vasari, the chronicler of the lives of great Italian artists, described the boys as symbols of the “golden age” of Julius’ Pontificate, whereas modern scholarship has defined them as symbols of Neoplatonic philosophy or theology. As Italian philosopher Giovanni Pico della Mirandola wrote, they were meant to inspire man to glorify God who created man in his own image.

Hey Girl, Do You Want to Pull This Ribbon with Me?

However, probably the most convincing explanation for the role of the Sistine Chapel Ignudi is from Charles de Tolnay who wrote that they are there as ‘angelic figures’, intermediary creatures between man and divinity. Don’t you agree?!