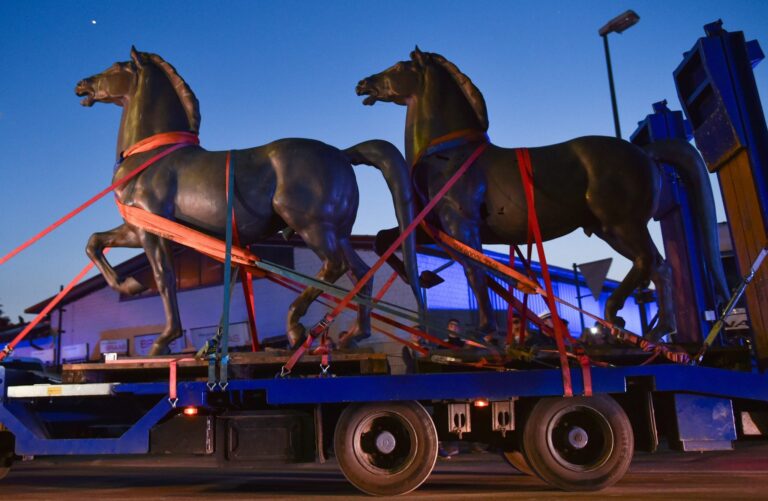 When the year has come to an end it’s always fun to look back at the books that inspired and impacted us. For me, easily the most fascinating book I read this past year was Arthur Brand’s Hitler’s Horses: The Incredible True Story of the Detective who Infiltrated the Nazi Underworld. Translated from Dutch, it was released in English in February 2021. This true story is told by Dutch art detective Arthur Brand and recounts his journey to track down Hitler’s monumental golden horse statues. It was always believed that the Russians destroyed them in 1945 during the Raid of Berlin.

Arthur Brand is one of the best-known art detectives. He recovered works by Dali, Picasso, Van Gogh, and even Oscar Wilde’s ring! It took Brand almost two years to find the statues (around 2013-2015). The book takes us through that time with his research, the process of uncovering and following lead after lead. It reads like a spy novel or thriller, taking a ride through Germany’s history from World War II cover-ups to the Cold War Stasi Police involvement through modern-day black markets and Neo-Nazi underground world.

During the Nazi regime, Joseph Thorak was one of two official Third Reich sculptors. He was referred to as Hitler’s favorite and commissioned with folkloric and nationalistic massive, monumental pieces. His two Streitende Pferde (Walking Horses) stood 5 by 10 meters (16 x 33ft) and were placed outside of the Reich Chancellery in Berlin. Legend then has it that the statues were no longer in existence by the end of the war. Reduced to rubble by the Russians. As the book unfolds, it shows this was far from true and winds through the twists and turns of the history of the Streitende Pferde.

When Brand hears that Hitler’s horses may not have been destroyed, his initial reaction is that these are forgeries. In an art world rife with crime and fakes, the illicit art market ranks as the world’s third-largest criminal enterprise (just after drugs and arms). This is a huge network and Brand walks us through his process and his dealings with people on both sides of the law. Nazi art crime and plundering is well-known, so this is a rare instance of the search being for Nazi art as opposed to the works they stole.

The brilliance of the book is taking you into the process of Brand’s search. There is no manual for this type of work, this is a hustle. It is intricate detective work involving skill, intuition, and a bit of luck. The visual depictions and descriptions are incredibly vivid in laying out the hunt and you really feel a part of the ride. It reads like the plot of a movie as we follow along with uncovering the provenance, tracing the history, locations, and the number of parties these statues are moving through.

Brand also has a great sense of humor, it’s sprinkled throughout the book and adds a personal feel, making it all the more enjoyable to read. An interviewer asked him how much he made from all the research and work in tracking down the statues of Hitler’s horses. He humbly replied that it actually cost a great deal of his own funding and after all “Who do I send my invoice to, [Angela] Merkel?”

For all the excitement, intrigue, and intensity of the search, Brand also is aware that this is sensitive and painful material from a horrific part of history. He treats this with great reverence and respect. He recovers stolen art to restore bits of history and humanity and as he puts it:

If we were to eradicate everything we disliked about former ages, there’d be precious little left. History’s greatest value lies in its potential to help us understand the world a bit better.

Some artists are gateways to art and its history; creators who make an authentic and one-of-a-kind work that is referenced over and over. Fernando...

In Suzanne Valadon: Model, Painter, Rebel, the Barnes Foundation in Philadelphia, PA, shows how Valadon transitioned from an in-demand model to a...

The Titian’s Vision of Women. Beauty–Love–Poetry exhibition is a major highlight of Kunsthistorisches Museum in Vienna that runs from 5...

Until Sunday, January 30th, 2022, the Georgia Museum of Art is exhibiting some of the most influential Native American printmakers at work today.