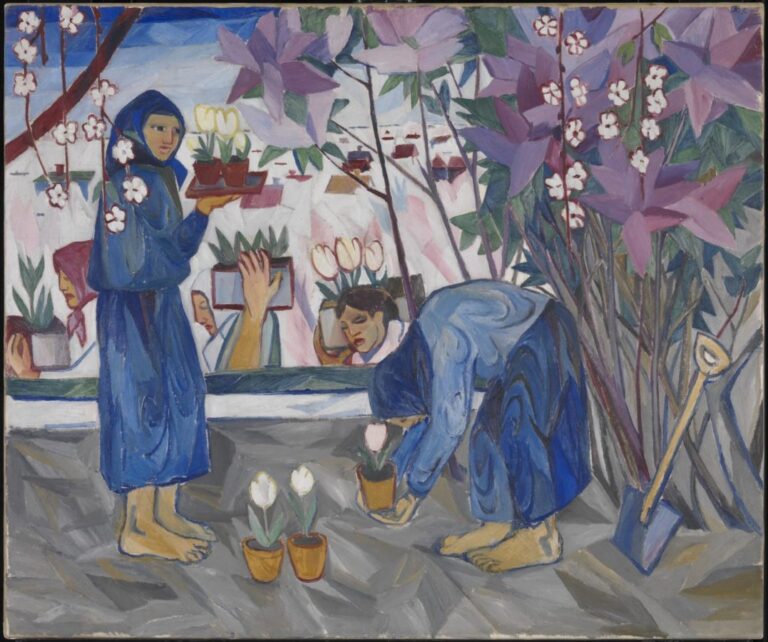 How to Take Care of Your Hair: 5 Tips Inspired by Zinaida Serebriakova

Have you heard of Natalia Goncharova? She was a leading Russian avant-garde artist who gained significant recognition in her lifetime, both in Russia and in Western Europe. Today we know her as one of the most prominent figures of modern Russian art and one of the most influential modern female artists!

Natalia Goncharova‘s birthday might be confusing, some say it is on the 21st of June, others the 3rd of July, 1881. One must remember that in Russia the Julian calendar was in use until 1918 and that is the cause of this confusion.

Goncharova equals eclecticism. She began studying sculpture at the Moscow Institute of Painting, Sculpture, and Architecture (where her father had studied before her). When she met her love Mikhail Larionov she turned to painting, then when she came across Sergei Diaghilev she was asked to design costumes and backdrops for his Ballet Russes in France. Eclectic was also her style, which combined Russian and Asian folk art, Oriental elements, Cubism, etc. She admitted that when she went to France, “they [the contemporary French artists] opened my eyes to the great importance and value of my country’s art, and by extension, of Oriental art as well.” Moreover, her iconography was eclectic, too: she held dear Russian Orthodox icons but also profane themes of a simple peasant life.

Although she was born into a well-off family, she spent most of her childhood on her grandmother’s estate in the countryside. The family moved to Moscow when she was ten because her father was going through financial troubles and was hoping for better prospects in a bigger city.

The artist made a prosperous career quite early on: it was Diaghilev who invited both Larionov and Goncharova to exhibit in Paris in 1906 and despite some controversies (like parading semi-naked the streets of Moscow displaying futurist tattoos), she was growing increasingly popular in Russia. She held a major avant-garde exhibition in Moscow in 1913, aged just 32.