Painting of the Week: Jacopo Tintoretto, Marriage at Cana 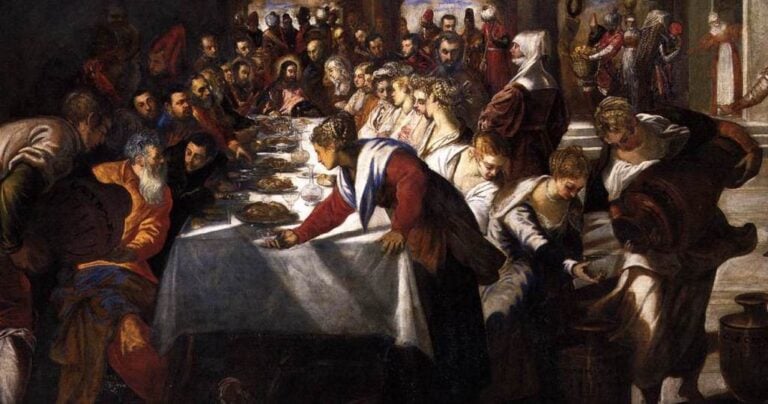 Because it’s the New Year’s Eve tomorrow and many of you are going to have fun I’ve chosen for our painting of the week a work depicting a party. It’s not a typical party, it’s a biblical wedding scene. Painted by the Venetian master Jacopo Tintoretto, Marriage at Cana looks more like a feast at the Doge’s Palace than an illustration of Christ’s life.

It is kept in Santa Maria della Salute in Venice. So in one of the most beautiful and iconic buildings of La Serenissima. John Ruskin who studied works of Tintoretto very extensively wrote: “The church of the Salute is farther assisted by the beautiful flight of steps in front of it down to the canal; and its facade is rich and beautiful of its kind, and was chosen by Turner for the principal object in his well-known view of the Grand Canal.”

According to Ruskin, Tintoretto’s gem is hidden at the end of lunette in a larger sacristy, and it is “one of the most highly finished Tintoretos in Venice”. It is also one of the few paintings signed with his own name. Ruskin wrote: “I am not surprised at him having done so in this case. Evidently the work has been a favourite with him, and he has taken as much pains as it was ever necessary for his colossal strength to take with anything”.

The marriage at Cana is the first miracle attributed to Jesus in the Gospel of John. In the Gospel account, Jesus, his mother and his disciples are invited to a wedding, and when the wine suddenly runs out, Jesus delivers a first sign of his miracolous nature by turning water into wine. The subject became very popular among art patrons because it was a perfect pretext to show their financial status. By placing the scene in their own fance interiors and filling them with people in rich costumes and tables heavy with sophisticated dishes, they made a statement of power. Many renown masters painted the Marriage at Cana, for example it was one of the favourite subjects of Paolo Veronese.

In Tintoretto’s version, it’s the perspective which should get special attention. The spacious room is drawn very precisely and it’s the architectural elements such as cassetones on the ceiling, doors and windows, that create the effect of spaciousness. The painting is full of people and many other details but somehow our eyes are led straight to Christ hidden in the back of the room.

I wish you a great feast tomorrow!