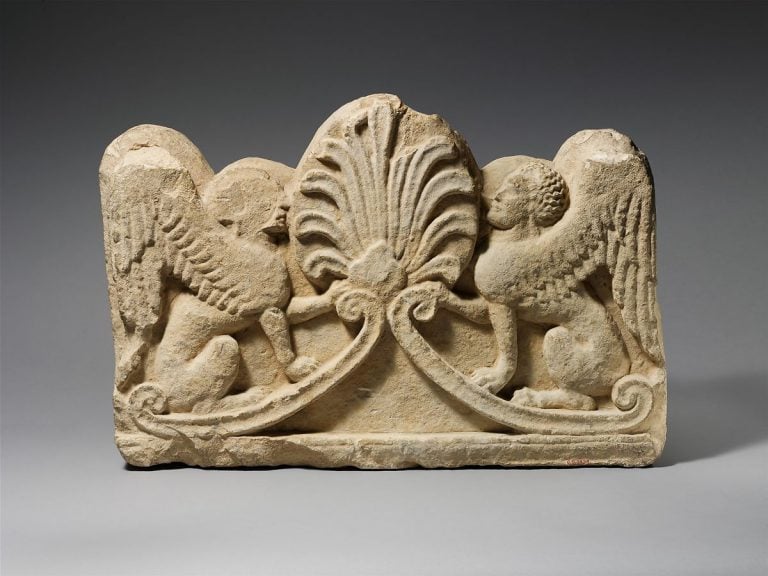 Masterpiece Story: Judgement Scene from Book of the Dead of Hunefer

The majority of sculpture that survives from ancient Cyprus are funerary stelae, elaborate grave markers to commemorate the dead. Possessing an almost mystical quality that is highly evocative and equally arresting, these emphatic monuments preserve a living memory of the deceased for their loved ones. We travel back in time to learn more about Cypriot funerary stelae and where you can see these archaic memorials today.

The Island of Cyprus

Cyprus is a small island located in the eastern Mediterranean Sea. In Greek mythology, it is the birthplace of Aphrodite and some believe her spirit roams the island. Cyprus lies directly south of Turkey, north of Egypt, west of the Levant, and Near East. Being a major crossroads in the ancient Mediterranean world made Cyprus a hotbed for trade. The island was also rich with the natural resource of copper and this increased its economic value tremendously. In ancient times, funerary stelae were part of the landscape along with temples and sanctuaries. Over centuries, Cyprus acquired a complex and tumultuous history that has shaped its present.

Who Were the Ancient Cypriots?

Cyprus has been inhabited since prehistoric times. The first to invade and leave behind great cultural influence were the Mycenean Greeks some 3,500 years ago. Throughout history, many other cultures arrived that colonized and conquered including the Phoenicians, Assyrians, Franks, Venetians, Egyptians, Romans, Persians, Ottomans, and British. Each culture left its mark on the island creating a diverse cultural landscape. The ancient Cypriots believed in the afterlife and usually buried their dead with objects to accompany them to the other side.

Cypriot funerary stelae were mostly carved from soft, local limestone found throughout the island. Workshops that produced funerary stelae were found in the ancient cities of Kition, Marion and Golgoi. Skilled artisans sculpted beautiful reliefs that depicted human figures, animals, and symbols important in ancient Cypriot culture. These stelae were often painted to imitate liveliness to reassure the living that their nearest and dearest carried on in the great beyond.

Funerary stelae did not directly represent the deceased, but usually depicted mythical guardians to watch over the dearly departed in the afterlife. The most common entity was the sphinx, a mythical creature believed by the ancient Cypriots to protect the dead and always faced sideways on funerary stelae. These devotional markers were of different shapes and included various characteristics. Some were rectangular with or without niches, others included pediments with double niches, and some were decorated with palmettes or combined many elements.

Not only did funerary stelae serve as testaments of lost loved ones, they also served as ritual objects. The living continued to visit the funerary stelae to keep the memory of their dead alive. Offerings were made and stelae were decorated with wreaths or ribbons to pay homage to the dead.

During the Archaic Period (750–480 BCE), Cyprus was ruled by the Egyptians after the fall of the Assyrian Empire. The Egyptian style of art largely influenced Cypriot sculpture and this is clearly evident in funerary stelae that bears the head of Hathor, the Egyptian fertility goddess. Popular motifs displayed on Archaic funerary stelae were the crescent and the winged sun disc. Human figures were also depicted. It was also during this period that cremation was the preferred mortuary practice. The size of grave mounds expanded while ornamental gravestones and memorial columns became more popular.

Although the Persians ruled the island during the classical period (480–310 BCE), Cypriot culture was greatly influenced by Athenian Greeks and the Ionians. However, the Cypriots also contributed their own artistic style to their funerary stelae of this time. Burial and cremation were equally popular. Grave structures became more simplified and uniform, metal containers were used as opposed to ceramic urns. The funerary stelae of this period are considered to be some of the best examples of classical art in Cyprus.

The prothesis or preparation of the body was the first part of the funeral ritual in ancient Cyprus. This intimate act was usually performed by elder women, who were close to the deceased, in the house of the family. The body was washed, covered with oil, and wrapped with cloth. The head was adorned with ribbons, flora, or a crown made from natural foliage. The body was then transferred to a raised bed that was covered with cloth with the feet facing towards the door. During this time, loved ones came to pay their respects and mourn the dead.

The ekphora or funeral procession followed three days later. Just before dawn, the body was carried to the gravesite by family members or friends by a horse-drawn cart to a site that was usually located outside of the city walls. Men walked in front, the women followed behind and the procession traveled along a back route to reach the site avoiding the main road.

For the burial, the body was wrapped in cloth then placed directly into the ground or sometimes buried inside a coffin. In the case of cremation, the urn or container holding the ashes of the deceased was also placed and buried in the ground. Gifts for the departed were sometimes placed inside the grave along with the body or left at the gravesite.

Three days after the funeral, a purification ritual took place. The family members or people living within the house of the dead washed themselves with water from an outside source. The ancient Cypriots believed that death contaminated the water within the household, so it was forbidden to use. The house was also purified with uncontaminated water, ideally sea water, to cleanse the home of impurities.

Most surviving funerary stelae from Cyprus today can be seen in museums across the island, mainly the Cyprus Museum in Nicosia along with museums in Europe and North America. The Metropolitan Museum of Art in New York has an impressive collection and more of these sculpted tributes can also be found in the Louvre. While it is thrilling and of great interest to appreciate and observe Cypriot funerary stelae, does removing them from their original locations allow them to still serve their intended purpose?