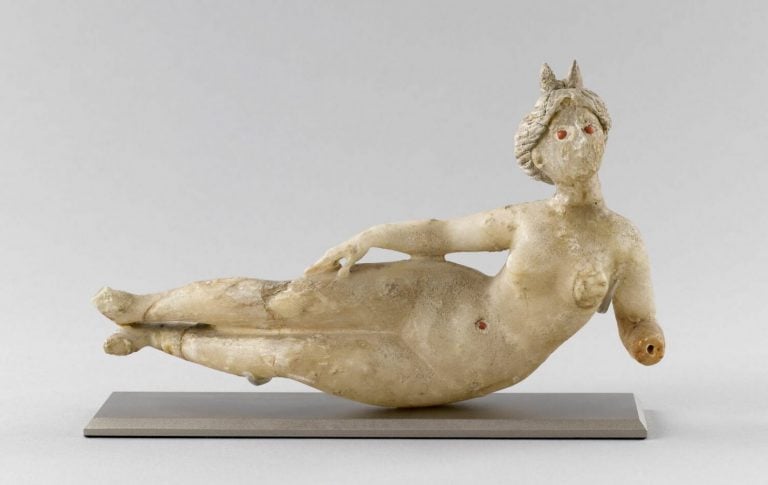 Several female nude statuettes have been unearthed from the subterranean landscape of ancient Iraq. Rendered in the Greco-Babylonian style, these sensual, stone beauties captivate all who lay eyes on them. Yet their true meaning remains a mystery, tied to a lost ritual leaving us to wonder: who were these enigmatic figurines of and what role did they play during the Parthian period?

The Parthian Empire ruled from 247 BCE to 224 CE. A mighty empire that stretched along the Silk Road from the Euphrates River in the west to Central Asia in the east. Parthians were polytheists, people were free to worship deities of their choosing, including both Mesopotamian and Greek deities. During the Parthian Period, several people worshiped the cult of Mithra or practiced Zoroastrianism. The ancient Persian goddess, Anahita, associated with fertility, water, and wisdom, was also a cult favorite.

Art of the Parthian period was an eclectic blend of influences from the Near East and Greece. The result was a combined aesthetic of Hellenistic and Babylonian styles. Wealthy Parthian traders largely supported the arts and exquisite works decorated important buildings and temples. Relief sculptures, statuary, both small and large scale, and architectural sculptures were quite popular forms of art. Relief sculptures were often carved from limestone and always depicted the front view of the human figure looking straight ahead to capture the gaze of the viewer. Some rock reliefs were carved directly into the landscape. This was the case at Behistun, in present-day Iran, where you can still experience these monumental narratives in the living rock.

The nude female was a popular motif in Parthian Empire art, particularly in the form of a small statuette. Many of these figurines were rendered either in a reclining pose or standing upright with one hand placed upon the breast as the other reaches out. Several reclining statues have been discovered throughout the ancient Near East at Parthian grave sites and residences. They are thought to represent a fertility goddess, but which one is debated. The standing figurines share a likeliness to the reclining statuettes, as both are rendered is a naturalistic manner with similar hairstyles made of plaster or bitumen.

During an 1863 excavation at Hillah, near the ancient city of Babylon, six tombs were discovered in an underground chamber, five which belonged to females. Within these tombs, small, female, nude statuettes had been placed near the head of the deceased. What was their connection to the deceased and who placed them there?

These female nude statuettes are composite figurines thought to represent a fertility goddess of the ancient world. Some scholars believe they are meant to represent Ishtar, the Mesopotamian goddess of fertility and war. Other theories presume her to be Astarte, the Greek equivalent of Ishtar, since Parthian artisans were largely influenced by the Greek aesthetic of depicting a naturally, posed figure.

The most appealing female nude statuettes have eyes and a navel inlaid with rubies. The use of semi-precious stones in place of eyes was a characteristic of Mesopotamian art. The figure wears a crescent upon her head, along with earrings and necklace- all of her ornaments are gilded in bronze. With one arm raised, she appears to be reaching out towards something or someone or perhaps she once held a sacred object in her hand that has long since disappeared.

The crescent shape could stand for an indication of divinity or semi-divinity. People of the ancient Near East believed the crescent moon symbolized a connection to the spiritual world. Therefore it is presumed that these statuettes may have been associated with mystical powers. These female nude statuettes seem to have served a funerary purpose. Did they also serve another purpose for the living? Were they used in sacred rituals or ceremonial practices?

The true purpose of the Parthian female nude statuettes remains unknown. Some scholars believe they were intended to protect the dead as a sort of talisman or amulet. Perhaps they were votive statues dedicated to a specific goddess or acted as a spirit-guide to accompany the deceased on their journey to the next life. It is also argued whether these figurines represented a local cult idol or an idol worshiped by the country as a whole. Though we may never learn their true identities, we do know they honored the female form and reflected the power of an esoteric belief system devoted to the goddess.

The Mortuary Temple of Hatshepsut

Hatshepsut (1479-1458 B.C.E.) was the fifth pharaoh of Egypt’s Eighteenth Dynasty and arguably the most important amongst ancient Egypt’s...