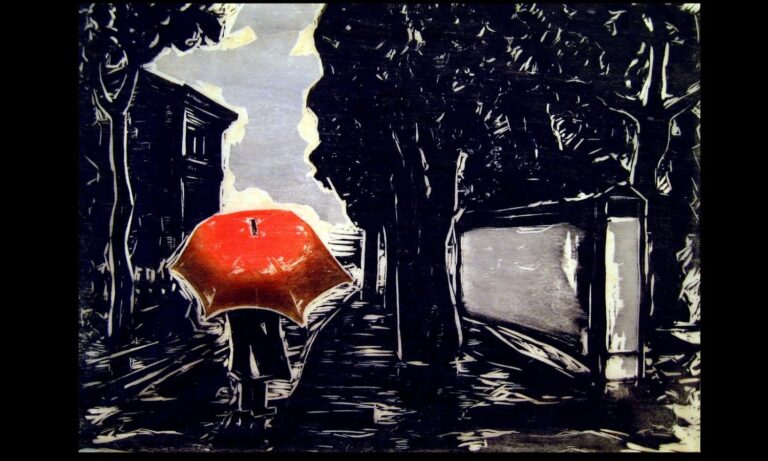 Whether it’s a dream or a memory, it does not matter. Our gaze is immediately drawn to a bright red umbrella that hangs in the black air like a magical object. Tiny perforations of light in the shadows indicate what the Expressionist xylograph by Oswaldo Goeldi states in its title. Rain, 1957, portrays two phenomena: natural one, rain, and the other human one, solitude.

Firstly, this painting is not exactly a painting. It was made with xylography, a technique of wood engraving. The production of a xylograph is very interesting. First, you carve the picture into a piece of wood, leaving the picture in relief, and paint this area. Then, with the use of a kind of press, the image is revealed on paper or another type of material. There are well-known xylographs all over the world, such as The Great Wave of Kanagawa, and like almost everything in art, the production of a xylograph requires patience and craftsmanship.

Although the xylograph originated in China, it became popular in Brazilian popular culture, mainly in the northern region of the country. Around here, xylographs represent the handcrafted heritage and it is very common to find them on covers of popular poem leaflets, known as string literature.

But it is not only the technical aspects that enchant in this print. Oswaldo Goeldi was born in 1895, in Rio de Janeiro, Brazil, and had an extremely troubled private life, with family disagreements being probably at the top of these troubles. Rain was produced in 1957, in the final years of Goeldi’s life, who died four years later. He began his artistic career as a draftsman and painter while his work with xylography started in the 1920s. He later taught xylography at an art university. His art was influenced by artists such as Paul Gauguin and Edvard Munch.

Dividing periods of his life between European countries and Brazil, the artist showed from the beginning a lot of interest in the dark and imaginative aspects of human experience that art was able to describe. On a carnival day in 1961, Oswaldo Goeldi was found dead in his apartment. Abandonment, oblivion, and solitude were always central to his work.

Rain is a work of art that causes some anguish, which is a particular feature of Expressionist art. The scenario is very simple: a street flanked by trees of different types, a few houses, and a bus stop. A central figure is a person who walks (or stands) alone with a red umbrella – the only element that completely disassociates from the color palette fully based on darker shades. It protects the figure, but at the same time, exposes them. The choice of red for the umbrella is probably the most fantastic idea of this work.

The solitude of this work is absolute. Not just because the protagonist is alone, but also because of the rain. Although the title says “rain”, the light blue sky heralds a beautiful day coming. A contrast between what is expected, and what we get, makes for a metaphor for the human condition. We eternally wait for something.

Is there anything more solitary than the idea of waiting indefinitely and on your own?