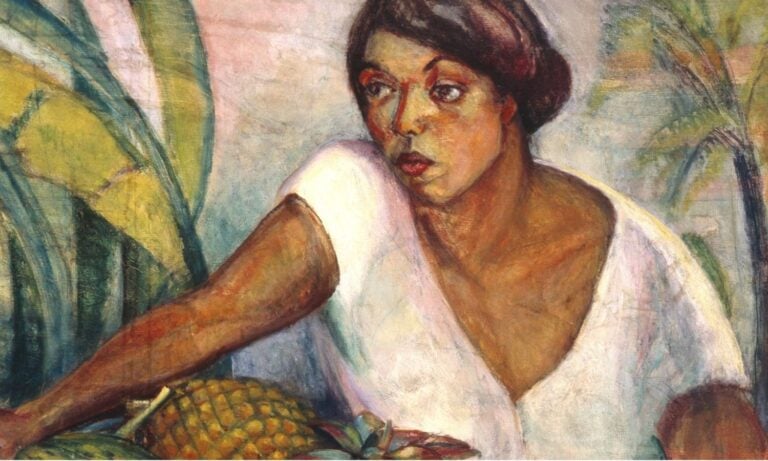 Women portraits made by other women are always worthy of attention. The representation of a woman by another is not usually idealized or romanticized and it usually can be interpreted as an allegory of the artist herself. Perhaps this is the most striking aspect of the portraits of women by Anita Malfatti, a Brazilian artist that I would like to present to you today.

Anita Catarina Malfatti was born in 1889 in São Paulo. Anita's father was Italian but he, unfortunately, died during the girl's childhood. Her mother, who was American, taught painting and languages. The death of the father seems to have deeply affected Anita who at the age of thirteen attempted suicide on a train track. Well, maybe it was not exactly a suicide attempt. There are those who believe that the girl did this just to face her fear of death. A dangerous attempt, don't you think?

She herself said in a later statement that she had suffered at the time because she had not known what course to take in life. However, it was from this experience, which fortunately went wrong, that Anita decided to devote herself to something that could, as she said, reveal the depth of her sensibility. She decided to paint.

Anita's formal education in art began around 1910 when she went to Germany to study at the Imperial Academy of Fine Arts, where she remained until 1914. The following year, the Brazilian painter went to the United States and deepened her studies in painting which resulted in her Expressionist tendency.

In 1917, back in Brazil, the young artist gathered some of her works and exhibited them in São Paulo. In that exhibition, she featured some portraits of women that revealed the intimate essence of the artist.

In The Russian Student, Anita centralizes her model (which will be repeated in other paintings) but the girl does not look at the observer. She demonstrates shyness that seems to be characteristic to the painter herself, who was educated in a college run by nuns and had a slight deficiency in one hand, which may have left her self-conscious on certain social occasions.

One of the things I like best about this painting is the choice of colors. The yellow - which will be frequent in her work - mixed with ochre tones and some variations of green and blue, constitutes the most interesting part of this painting. I also always feel inevitably drawn to the girl's eyes: please take a look at those eyes once more and notice their intensity.

The exhibition of Anita's paintings caused an extreme scandal at the time. Think that she exhibited her works to a city that had been used to solely traditional academic painting. Academic painting was the standard with which the São Paulo elite was accustomed and seeing the girl's cubist aesthetic was not a pleasant experience for most of the public and critics, especially one critic, in particular, the Brazilian writer Monteiro Lobato (perhaps you have heard of him, he is the author of The Yellow Woodpecker Farm, a very popular book in Brazil).

Such artworks like The Silly and A Student, which Anita produced during her stay in the United States, were angrily reviewed by Lobato. The writer was cruel: referring to modern art in general as "caricature art", he said that Anita was lost in the "forced aesthetic attitude towards the extravagances of Picasso and company." Ugh. And he did not stop there: he recognized that the girl had a talent that he called "unusual" and "vigorous" but because she was "seduced by what she calls modern art", her art was rather debatable. Nasty, isn't it?

The blow was hard for the sensitive-minded artist. Anita Malfatti, the pioneer of Modernism in Brazil, ended up returning to the more traditional patterns of painting and abandoning the avant-garde style so present in works such as The Woman with Green Hair.

There is one detail of most of her paintings that reveal a little secret of Anita: as a child, she developed an atrophy in the arm and right hand and hence needed to learn to write and paint with her left hand - which she did very well. If you look at most of her works, exposed hands are a constant element. Who knows if the hands of these women do not represent the hands of the artist herself, not only as part of the body but as part of her identity?

Still, in her most experimental phase, Anita painted this beautiful painting above: Tropical. Remember that despite being Brazilian, Anita had an education in the art based on European and American tradition. Painting an essentially Brazilian theme showed the look both from the inside and the outside of the country. It is one of few paintings in which Anita's nationality is so pronounced since she paints a girl with mixed race skin, thick lips, brown hair and dark eyes who holds a basket of typical Brazilian fruits.

Despite the harsh criticism she received, Anita was instrumental to the change in the arts that happened in Brazil. The intellectuals, artists, writers organized themselves into a small nucleus to defend Anita against negative critics. This group held in 1922 the Week of Modern Art, a crucial event for Brazilian art which catalyzed its transition from academic traditions to more modernist styles.

In 1923, shortly after the event that gave rise to modernism in Brazil, Anita won a scholarship to study art in Europe, this time in France. In this period she produced the artwork Chanson de Montmartre, one of the most delicate and subtle things that her hand has created, but which, in my opinion, is actually one of the works that the least resembles the "Malfatti style".

One no longer sees the cubist shapes, the boldness in the colors, the anguished expression of Anita's interior. Perhaps the same can be said of Mulher do Pará, made around the same period.

In La Rentreé, which is my favorite work of this artist, she is able to perfectly capture an intimate situation without giving up her particular technique. Intimacy seems to be the watchword of Anita's paintings, but in this particular painting, it is even more evident.

It is certain that the deformity of the bodies, characteristic of the early years of Anita, does not appear so much in this work, but it returns this time in a more stylized way. What I like about this picture is that the two women convey the sense of silence and at the same time unity.

This is the trademark of this artist: the women by Anita Malfatti have in themselves a force that surpasses the ordinary because it comes from the artist herself. Anita left a little of herself in each of the women she painted.

When Anita returned to Brazil in 1928, the reception of her work was already different. She was received as a great artist, sold her paintings, received numerous orders, began to teach drawing and painting and was a kind of celebrity - the pioneer of modern art in Brazil - who was being invited to all kinds of events related to art. In her later years, she turned to more popular and regional themes. She established herself as the country's first truly modern artist and was directly responsible for the event that marked the beginning of modernism in the country.  She also taught courses in Art History and participated in the First Biennial of Arts in São Paulo. In 1963, the Biennial dedicated a whole room to the work of Anita and made her the guest of honour. She died the following year yet her sensitive and at the same time extremely strong identity remained considered an invaluable contribution to Brazilian art.