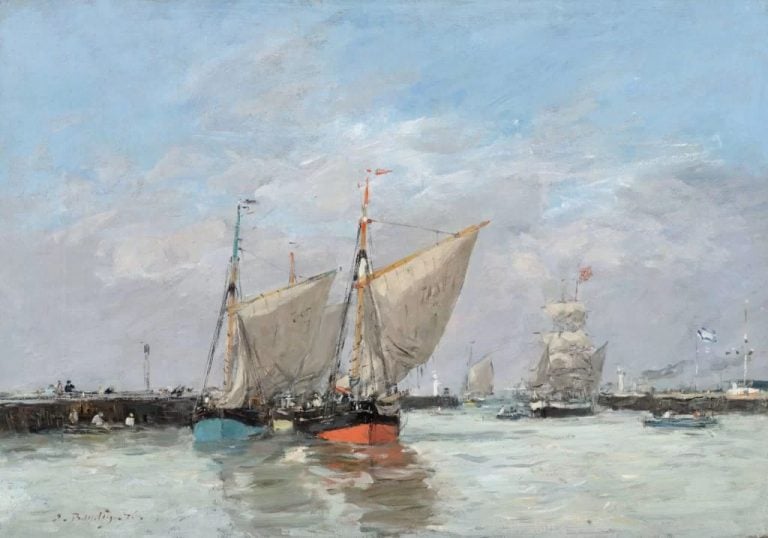 Eugène Boudin could be considered one of the fathers of Impressionism. It was he who met and influenced a young Claude Monet in 1858 with his sketchy impressionistic landscapes. Boudin’s changing color values, bold brushstrokes, and limited lines were stylistic elements clearly adopted by later and more famous Impressionist artists like Claude Monet, Auguste Renoir, and Camille Pissarro.

Eugène Boudin lived and worked the majority of his life in the seaside towns of Normandy surrounding the Seine Estuary. Honfleur, a city on the estuary’s southern bank, was home to his father who was a sailor. Le Havre, a city on the estuary’s northern bank, was Boudin’s home and studio location. The sea and sky were symbolically in his blood with the constant presence of the Seine River, the English Channel, and his father’s nautical career.

Trouville, Jetties, High Tide was painted in 1876. It is a small oil on canvas measuring only W 17 ¾ x H 12 ¼ in (W 45.1 x H 31.1 cm). Despite its diminutive size, it has a grand visual impact by masterfully capturing the fluid blue shades of both water and sky.

The painting does not have a centrally focused subject. Like an informal photograph snapshot, it captures the general ambience and delicate movements surrounding two jetties in the Norman seaside town of Trouville-sur-Mer. In the foreground are two large masted ships. The left one is painted blue while the right one is painted red. In the midground are two jetties painted in brown shades at the horizon level on the left and right sides of the composition. A midsize brown-masted ship gives a sense of distance and scale to the larger foreground ships. In the background is a small yellow masted boat floating beyond the jetties. It completes the linear perspective and sense of vast distance.

Jean Baptiste Camille Corot stated once that Eugène Boudin was the “king of the skies” and Trouville, Jetties, High Tide highlights this title. Where unskilled artists would depict a solid expanse of blue, Boudin injects hues of white and grey to add variation and interest. Faint whispers of clouds pattern the uppermost sky and then transform into vast layers of mottled clouds and mists towards the boats and jetties. The sky’s moisture and wind are palatable.

Below the ships is an equally playful sea. The water is a fusion of blue, white, grey, black, and red brushstrokes. Directly in front of the boats are shadows flickering upon the water’s surface. Shades of the boats’ hulls are used in the shadows to capture the water’s reflective effect. The shadows add a sense of body to the ships and water but in contrasting perceptions of permanence. The boats seem more substantial and permanent due to the shadows while the water seems more insubstantial and impermanent. The boats are solid and fixed, while the water is liquid and mobile. The shadows tie these two opposed elements together.

Trouville, Jetties, High Tide by Eugène Boudin is not an earth-shattering piece of Impressionism. It did not cause any great reevaluation, scandal, or impact within the historical context. It was not lauded at a great exhibition by prominent critics. However, it does add to the masterful oeuvre and legacy of Eugène Boudin. It is a masterpiece of subtle qualities.