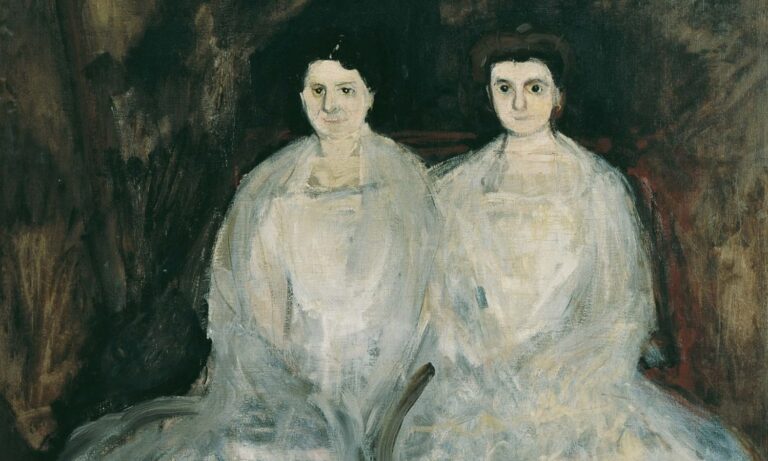 When an avant-garde composer and painter becomes friends with an avant-garde painter, their relationship will be a stormy one. And if the wife of one of them becomes involved, things will get even more complicated… This is a story of Vienna, friendship, music, romance and Richard Gerstl’s breathtaking pieces. Brace yourselves, it doesn’t end well.

Richard Gerstl, born 1883, was a young, withdrawn, and difficult artist who, at the age of 22 was invited to a house of a famous and groundbreaking composer Arnold Schönberg, who was the first to write atonal music and eventually is identified as father of serialism. Schönberg was passionate about painting and wanted the young artist to teach him and his wife Mathilde (six years older than Gerstl) how to paint. On this spring day of 1906, presumably at Schönberg’s request, Gerstl painted portraits of both husband and wife which must have pleased them because almost immediately Gerstl was introduced to several portrait commissions and was introduced into the circle of the composer’s friends.

Two men had become close, they spent vacation together, Gerstl supported Schönberg after ferocious public criticism that the composer had faced after a series of concerts in early 1907 and by the time of their second joint holiday in 1908, they even shared a studio in Schönberg’s building.

During this second vacation many things happened. Gerstl, displaying most possibly manic-depressive behaviour produced a series of wild, almost abstract portraits of the Schönberg family (some claim that these works can be forerunners of Abstract Expressionism). Schönberg, perhaps inspired by his friend’s Expressionist technique, wrote the String Quartet’s fourth and final movement, which is a vocal setting of Stefan George’s Entrueckung, a poem that begins with the line, “I feel the air of another planet” and is the first major composition in which the composer made a leap to atonality.

A love between the composer’s wife and the artist must have been budding for a while. On 26 August, Mathilde and Gerstl were discovered together by Arnold. Subsequently, the two lovers fled, first to a hotel and then to a pension in a suburb of Vienna. They stayed together for three more days before Schönberg tracked Mathilde down and brought her back to the family home. However, her liaison with Gerstl appears to have continued, she kept on visiting him in his atelier. Arnold immediately excluded Gerstl from his friends and did not even want to see his face. Eventually, he persuaded Mathilde to leave Richard “for the sake of the children”.

Gerstl couldn’t bear losing both his best friend and his lover. On the afternoon of a concert  by Schönberg’s students that everyone attended but Gerstl was not invited, he stabbed and then hung himself in front of the mirror in his studio, surrounded by his paintings. He was just 25. His works, never exhibited and known by a small circle of friends, were packed hastily away while Richard’s death was hushed to avoid any scandal. It was only in 1931 when the paintings were discovered and finally shown to the public for the first time.