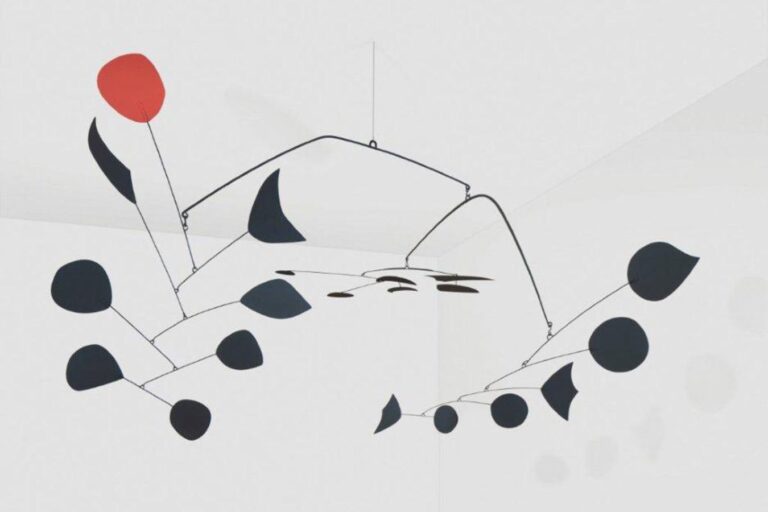 Alexander Calder was an American sculptor known as the originator of the mobile, a type of moving sculpture made with delicately balanced or suspended shapes that move in response to touch or air currents. Like this one:

Calder’s monumental stationary sculptures are called stabiles. He also produced wire figures, which are like drawings made in space, and notably a miniature circus work that was performed by the artist.

And this post will be about the Circus. In 2008/2009 the Whitney Museum of American Art in New York presented the exhibition “Alexander Calder: The Paris Years, 1926-1933” which gave a new look at the artist’s early years, when his radical innovations included open-air wire sculptures, his beloved and important miniature “Circus”, and the creation of a new art form, the mobile.

This video excerpts scenes of Calder performing the “Circus” from a 1955 film by Jean Painleve.

As you can see, the Circus was a toy theater piece the artist constructed between 1926 and 1931 and performed for decades. It involves wire models rigged to perform the various functions of the circus performers they represent, from contortionists to sword eaters to lion tamers. He made models from various items, generally wire and wood. Calder began improvising performances of this circus during his time in Paris. He would comment in French during the performance.

The critics loved it. Legrand-Chabrier reviewed the show in 1927:

“Oh, these are stylized silhouettes, but astonishing in their miniature resemblance, obtained by means of luck, iron wire, spools, corks, elastics… A stroke of the brush, a stroke of the knife, of this, of that; these are the skillful marks that reconstruct the individuals that we see at the circus. Here is a dog who seems like a prehistoric cave drawing with a body of iron wire. He will jump through a paper hoop. Yes, but he may miss his mark or not. This is not a mechanical toy…”

“I began by futuristic painting in a small studio in the Greenwich Village section of New York. It was a lot different to engineering but I took to my newfound art immediately. But it seemed that during all of this time I could never forget my training at Stevens, for I started experimenting with toys in a mechanical way. I could not experiment with mechanism as it was too expensive and too bulky so I built miniature instruments. From that the toy idea suggested itself to me so I figured I might as well turn my efforts to something that would bring remuneration. From then on I have constructed several thousand workable toys.”