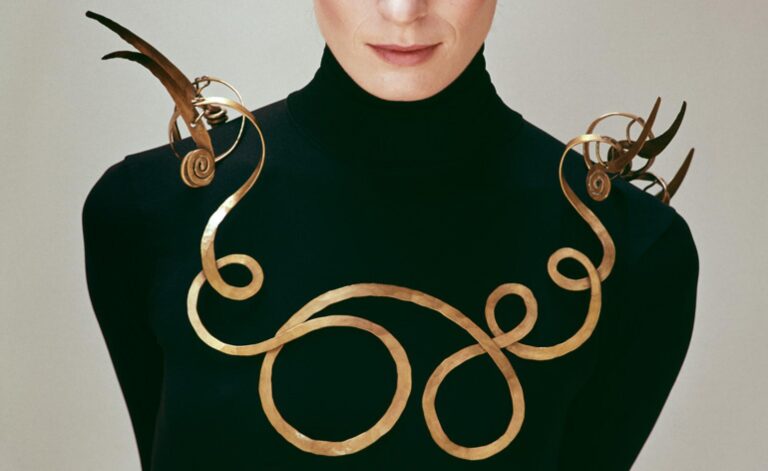 Alexander Calder is one of my favorite sculptors, his mobiles are so light and simple and yet stunning with serene beauty. However, today I won’t write about them but about the jewelry pieces he would make for his wife and his friends. His personal engagement with the creation of every single item makes them unique and very, very expensive nowadays.

He started making small pieces already as a boy that he would give to his sister and her dolls. He then abandoned them for the sake of sculpture but returned to jewelry making at the age of 29. When he met his future wife, he decided to make a ring for her. “I thought this would do for a wedding ring,” he recalled in 1966, “but Louisa merely called this one her ‘engagement ring’ and we had to go to Waltham, nearby, and purchase a wedding ring for two dollars.”

After this shy beginning, Calder would gift Louisa a new piece every year, both for wedding anniversaries and her birthdays. They would range from inscribed brooches, statement necklaces, or special buttons for a coat.

According to gallerist Louisa Guinness, Calder’s jewelry was not for everyone, especially since the artist used found materials which otherwise would be considered debris, or pieces of wire and glass, or even kitchen cutlery. He was not interested in the market value of the material, but in the aesthetic of the design. And the designs were undoubtedly his, exhibiting typical Calderian motifs like the spiral.

Subsequently, the jewelry was worn by Calder’s friends such as Peggy Guggenheim, Simone de Beauvoir, or Georgia O’Keeffe. “It was like a secret club, people would wear it and you had to be bold and brave, it was like wearing a funny hat … people would look at you. It wasn’t for everyone, it wasn’t for the timid,” said Guinness, “He made them with his own hands and was never really without wire and a pair of pliers in his pocket, [which] he would take out and start playing with.”