Disney Figures in Art That Make You Think Twice 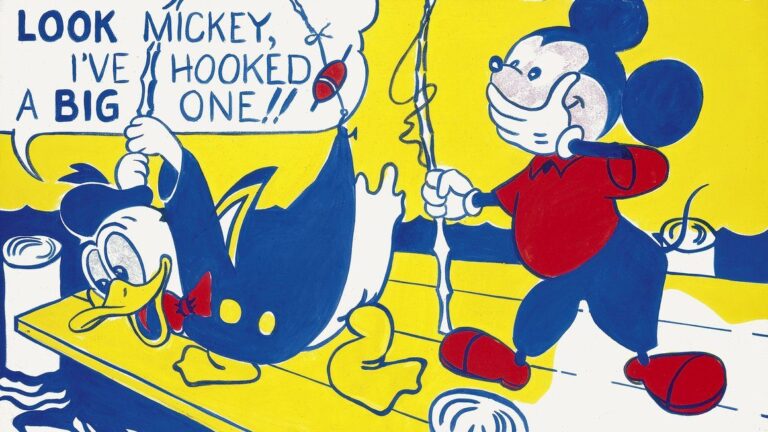 Who doesn’t like Disney characters? They are cute, sweet, and adorable. They also represent an ideal image and simplify our world view. That’s fine in children’s movies, but some artists use Disney characters to portray their criticisms of society.

Karin Hanssen places her realistically painted characters in specific situations. They almost look like movie stills. She focuses on the influence of mass media and popular visual culture on our experience of reality. Hanssen points out the pitfalls of an exaggerated belief in personal fantasies, to the point where these ideals take on a life of their own and any link with reality threatens to be lost.

Take a look at the children who meet a life-size Donald Duck in her work The Approach. While one boy shakes hands with Donald Duck, the other reflects on the scene. Is this real? Maybe these children are looking for a role model like the Disney characters in the cartoons. The artist assumes, therefore, that people mirror themselves in the characters. Herein lies her critique on actual society, where people are losing their personality.

It is no coincidence that Hanssen depicts identical twins in her painting. Although the two boys physically look very much alike, they can have different personalities. The setting of this scene also reacts to this. The work is based on a photograph taken in 1980 in a shopping center in Saudi Arabia, but there is nothing that refers to that place. It could be anywhere, shopping malls tend to be very similar, and that is where the loss of personality lies.

Pop Art lends itself perfectly to depicting the ideal world because it is inspired mostly by advertising. And to be honest, what advertising agency doesn’t try to show their product being promoted at its best? Throughout the modern cityscape, brand names from advertising can be seen. And it is here that pop artists choose their subjects from everyday life. These images are symbols of prosperity and that is why the pop artist involves these banal things in art to alienate, ironize, or fetishize them.

The American Roy Lichtenstein copied pictures from comics to emphasize stereotypes. It was his way of criticizing consumer society. Both the style of painting and the use of color can be described as simple and almost mathematical. A surface is red, blue, or yellow. Nuances are nowhere to be found. Just like the Disney characters: there are only good guys/girls and bad guys/girls. There is rarely a nuance or a character that combines both good and bad qualities. The mere fact that there is a division between good and bad indicates a naïve world view (however, not an ideal one).

In Look Mickey, Lichtenstein borrows a print from a Donald Duck illustrated storybook. He copied the print but simplified the color scheme. The primary colors give the work a “pop” look and are therefore accessible to a broader audience.

A Dark Vision of Disneyland

Pop Art may seem nice, but with Dismaland the British satirical street-artist Banksy gave a rather sinister twist on Disneyland. Dismaland was a temporary project, constructed in the seaside resort town of Weston-super-Mare in Somerset, UK. The event was open from August to September 2015.

It is clearly a critique of the magical Disneyland and was, according to Banksy, therefore unsuitable for children. Fortunately there is also a positive side to this project. After its closing, the building materials were recycled into shelters for homeless migrants.

Girl with a Balloon may be Banksy’s most popular work. Napalm is at least as eloquent and loaded with criticism of capitalism. He uses some American stereotypes as an example: Banksy represents it as a place where we forget about the rest of the world and its problems to enjoy theme park rides, cartoons, and cheap hamburgers. So, Disney is a safe place, far away from war where compatriots risk their lives.

Napalm, also known as Can’t Beat That Feeling (a Coca-Cola slogan in the 1990s), is a powerful print that is inspired by the internationally known photograph from the Vietnam War by photographer Nick Ut. The nine-year-old girl, named Phan Thi Kim Phuc, is running naked down a road alongside other children and soldiers of the Vietnam Army. She had ripped the burning clothes off as napalm burned her skin.

Banksy puts this girl next to well-known children’s characters Mickey Mouse and Ronald McDonald. While the girl in the original picture is walking alone, in Banksy’s print she is held by both her hands. At first sight, this seems a sign of protection; but looking closer at the facial expressions, you can only notice the contrast between the girl and the two American representatives. They are seemingly unconcerned by the girl’s emotions. This is how Banksy uses characters as an attack on American consumer culture, denouncing its lack of humanism.

A supplementary layer in the image stresses the commercialization of war itself. War has become a big business, not only for political lobbies but also for weapon manufacturers.

Next to the critique on mass consumption in society, you might wonder what became of the nine-year-old girl. As a young adult, she studied medicine in Vietnam and Cuba, where she met her husband, another Vietnamese student. On the way to their honeymoon in Moscow, they left the plane during a refueling stop in Canada and asked for political asylum, which was granted. She still lives in Canada.

Ben Allen‘s paintings combine Disney characters with the most concrete symbol of capitalism, namely the dollar sign. He comments on Western society and its obsession with money and power. Showing a lying Pinocchio, surrounded by one-dollar bills gives a clear symbol of lost innocence. Moreover, Pinocchio indicates in his body position that he is a victim of capitalism. He cannot help lying because of the benefit of gaining more money.

Could you ever blame such lovely Disney characters?