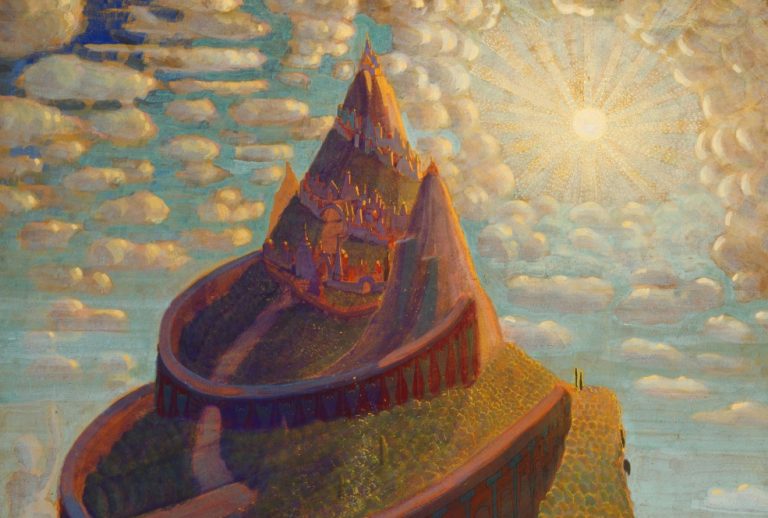 Wouldn’t it be nice to immerse yourself in a fairy tale? Hike among the heroes, fight monsters, visit enchanted lands… It would be a nice break from reality for sure. That is why today we present paintings that dwell in the fantasy world of fairy tales of Mikalojus Konstantinas Čiurlionis (1875⁠–1911).

Fairy tales are an important part of Lithuanian heritage, so it is no wonder that M. K. Čiurlionis, a proud Lithuanian, explores this topic in his paintings. Even though some people in his time looked down on fairy tales as a thing for children and country folk, he saw fantasy, fairy tales, and folklore as the prime basis for Lithuanian art. It comes as no surprise that he explored the fairy tale motif in his creations and took details, or even stories, from folklore and made them alive on paper.

The Prince’s Journey takes place in the clouds – the place where we look up as we daydream. Have you ever looked at the clouds and instantly saw a story unfold before your eyes? Maybe, like in this Mikalojus Konstantinas Čiurlionis triptych, you saw the clouds both friendly and frightening as they turned into the prince—the hero of the story—the terrifying dragon, and the light castle. Follow Čiurlionis’ triptych to see a typical fairy tale journey develop.

First painting: the prince receives a quest, as well as a blessing, from his father the king as he is about to set foot on his boat.

Second painting: the prince’s boat reaches the main battle of the quest. He must fight a dragon to pursue his path and continue on his quest.

Final painting: the prince’s boat reaches its destination and his reward. He reaches a castle where a throne is waiting for him to take his rightful place.

Another common fairy tale motif of quest and reward is seen in another triptych as well, but not necessarily in a typical order. While the more we think about it, the more it can become difficult to find the hidden meaning behind this, one incident perfectly describes how sometimes we should just trust our intuition, and remember folklore, as we look at Čiurlionis’ paintings.

This triptych was displayed during the second Lithuanian art exhibition (1908) in Kaunas, Lithuania. One of the attendees was a farmer and the exhibition leaders were afraid that he would not understand the works of M. K. Čiurlionis and would dislike the whole fair. But, as the guide was about to start to explain this triptych, the man told him to stop as he could see it clear as day; the paintings were showing a fairy tale of people climbing a mountain to find happiness as they think that on top of the mountain is a princess who will grant their wishes. But as soon as they reach the top, they see that nothing is there but a small child who is sitting and crying.

As the guide told this incident to M. K. Čiurlionis, he was happy beyond imagination. He was ecstatic that his art has found a way into the farmer’s country heart. This was important for him as he came from a small town himself and said that the path to great national art was through folklore.

In this fairy tale painting, we see the important and necessary part of the fantasy story—the journey or challenge facing the main hero. It is no secret that M. K. Čiurlionis was a fan of traveling and it was important for him to explore, even if he was quite poor (he did manage to travel through Europe and visit the Caucasus mountains). His passion for traveling and fairy tales unite in this painting as he creates an enchanted mountain, going towards the sky (Jack and the Beanstalk, anyone?), as well as a castle on top of it (what would a fairy tale be without a big castle on top of a mountain?).

Reminiscent of the saint paintings in churches, this painting features not a whole fairy tale scenario but only its symbolism. Two kings stop in the middle of a fantasy forest (look closely and you will see lively action and building silhouettes on the branches) and pick up a glowing orb—the essence of life and art, both real and fantasy. According to M. K. Čiurlionis, that central, glowing orb is the Lithuanian countryside.

The Lithuanian countryside (as well as nature) was very important to the artist and the folklore coming from it dictated a lot of the topics for his paintings. He even wrote in one of his articles that Lithuanian folk art should be the proud base for national art. Why? Because there is nothing more Lithuanian than folklore and folk art that comes from it. Knowing that this article came at a time when Lithuanians were trying to find their identity under the Russian empire, the notion of defining Lithuanian art was more than important—it was necessary in order to unite and guide the Lithuanian art movement.

You have already seen from Castle Fairy Tale that Čiurlionis enjoyed adding a bit more fantasy to landscapes that might seem real from the first glance. The Fortress, or Tvirtoves Pasaka, features well-combined fantasy and realism as you can see architectural inspirations from Egypt, Western Europe, and more combined into one landscape.

The Fortress is also reminiscent of inescapable maze worlds; the gate transforms into an archway, the road—while maintaining the same line—travels through the first and second level at the same time, and a river flows directly into the fortress. The setting sun casts its rays on the structures and reminds us that, as the night sets, the real world becomes just a little bit more mystical and magical.

As some of us grow out of fairy tales, M. K. Čiurlionis invites us to revisit them and dwell a little bit more in the fantasy world. Let’s remind ourselves of magical quests, magnificent castles, and miracles. Add a bit of magic into your own life as you look at these paintings and if you would like to know more about M. K. Čiurlionis and his magical paintings, visit the National M. K. Čiurlionis Museum of Art where most of his paintings are kept and displayed.

Greta Katkeviciene is currently enjoying her maternity leave and volunteering at M. K. Čiurlionis National Art Museum, with a goal to introduce the undiscovered genius that was M. K. Čiurlionis to the world.