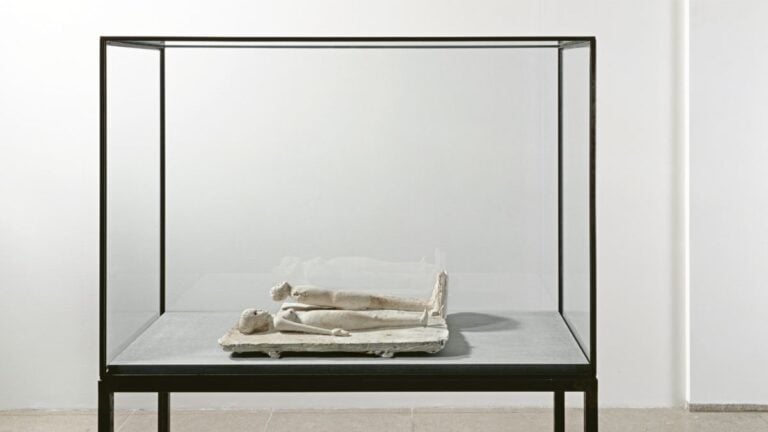 Joseph Beuys (1921 – 1986), currently on display at BASTIAN gallery, was a controversial German artist, whose work regularly caused public debate. Ritual and unorthodox materials, in particular animal fat and felt, characterize his wide-ranging artistic practice. His work also plays an important role in the Fluxus movement of the 1960s.

“Teaching is my greatest work of art – the rest is the waste product, a demonstration … Objects aren’t very important any more. I want to get to the origin of matter, to the thought behind it.”

Hammer für Schwerhörige (Hammer for the Hard of Hearing), for example, is a piece of dried cod with red crosses on paper. The seemingly simple objects placed together emphasise the interdependency of an organic material and a man-made tool. The work’s title playfully alludes to the notion of sound as sculptural material and the contradiction of the silent hammer, which would break when used.

The Fabrication of the Tatar Tribesman

Joseph Beuys grew up in an industrial German town, Kleve. As a child, he was part of the Hitler Youth and in 1941 began his military training as an aircraft radio operator for the German Luftwaffe. During the war, Beuys was stationed in the Crimea. His plane crashed in March 1944 and from this incident Beuys fabricated the lie that he was rescued by nomadic Tatar Tribesman.

“They covered my body in fat to help it regenerate warmth, and wrapped it in felt as an insulator to keep warmth in.”

What really happened was that a German search commando rescued Beuys, who then recuperated in a military hospital before redeployment. The myth that Beuys created is consistent with his later artworks. Like his artistic productions his biography too was clay to be sculpted.

For an art festival in Aachen in 1964, Beuys created a “CV” called Lebenslauf/Werklauf (Life Course/Work Course) for example. It was a fictionalized account of his life, using metaphorical and mythical speech. He called his birth the “Exhibition of a Wound” and claimed that the long-dead James Joyce commissioned his drawings.

The Tatar myth also gives an interpretive key to some of Beuys’ unconventional material choices, such as fat and felt. In 1970, Beuys said that “felt is … pressed together usually from hare or rabbit’s hair”, which also creates a link to the performance piece Explaining Art to a Dead Hare.

After the war Beuys returns to his hometown and set out to become an artist. He joined the Kleve Artists Association and enrolled in the “Monumental Sculpture” program at Düsseldorf Academy of Fine Arts. At the age of 32, Beuys completed his masters and began to live from commissions, such as making furniture and even a gravestone. For Beuys, the 1950s were a difficult period because of his financial situation and war-trauma.

During this time he produced thousands of drawings, exploring materials and philosophical ideas. In 1932, a selection of 327 drawings from this period made up an exhibition entitled The Secret Block of a Secret Person in Ireland. This name is a reference to Joyce, who was of interest for Beuys, who declared that another six books for of drawings constituted an extension of Joyce’s Ulysses!

Important Sculptures from the 1950s at BASTIAN Gallery

It is this period that the BASTIAN exhibition focuses on. The select pieces on display offer insight into Beuys’ interest in the spiritual world. For example, the unique sculpture Das Paar (The Couple), has a numinous air. Made of plaster, wax, and wood, it features two small figures lying next to each other on slabs. The figure with breasts is fully reclining. Meanwhile, the right hand figure is rising slightly from the stone. Initially they seem peaceful, but then the viewer notices the deep cut in the left-figure’s throat. Their strangely shaped heads and large eyes make them seem quite spooky. Additionally, a ritual feel comes from the dull tone of the plaster and the installation in vitrine (like most of Beuys’ work). The idea behind the sculpture possibly comes from the Homeric link between sleep and death. This isn’t completely morbid and does also suggest the intact state of mind and soul.

From Nature to Culture

Also at the BASTIAN exhibition are pieces in which Beuys documented his ‘leitmotiv:’ the path of transformation from nature to culture. In the piece Ohne Titel (zwei Elche) (Untitled, two elks), there is a watercolour drawing on a slab of slate, recalling Neolithic cave paintings. The two animals represent balance and respect. Overall the piece is a reminder that Beuys believed that all history should influence human thinking.

Beuys’ career as a professor and lecturer extended to his art. He saw himself as a shaman, guiding society in a new direction. This is sometimes manifest in his focus on natural phenomena, psychological processes and archetypal early Christian motifs. Another slate and watercolour piece, which is on display at BASTIAN, demonstrates these themes: Ohne Titel (Sybilla) (Untitled, Sybilla), makes reference to the Cumaean Sibyl from Greco-Roman mythology. The famous prophetess is at the foreground and trees in the background hint at the story of Aeneas, who the sibyl helped on his journey to found Rome.

Beuys’ success and notoriety in the artworld began with his appointment as a professor at Düsseldorf Academy of Fine Arts in 1961. For his class at the university, for example, he abolished entry requirements. This policy caused friction and in 1971 Beuys was actually dismissed from his post. 16 of the 142 rejected applicants occupied the offices at the school resulting in their admittance – but not the reinstating of Beuys.

His dismissal produced a wave of protest from students and artists alike. This led to Beuys delivering a huge number of public lectures and becoming more active in German politics.

Beuys believed in free art education for all, the discovery of creativity in everyday life, and that everyone is an artist. As a teacher Beuys was not interested in imposing his own style or techniques upon students. Consequently, he would also encourage discussions about politics and philosophy.

Beuys and the Fluxus Movement

“Fluxus” (meaning “flowing” in Latin) was an international and interdisciplinary community that existed during the 1960s and 1970s. One member was Joseph Beuys, who began to stage “actions”: ritualistic performance pieces which emphasized the artistic process over the finished product.

The Fluxus group had radical ideas about art and the role of art in society. The movement played an important role in the broadening of what is considered art.

The idea of process rather than finished product can be exemplified by the piece Ohne Titel [Untitled], which is currently on display at BASTIAN. It includes pieces of raw material that, when interacting in this way, encompass the starting point of creation. There is clay from the earth and wood from the trees. An imprint of a human hand hints at the idea of design, while also contrasting with the raw machine cut wood.

Explaining Art to a Dead Hare

Beuys’ best known “action” is How to explain pictures to a dead hare (November 1965). He spent three hours explaining his art to a dead hare. Meanwhile honey and gold leaf cover his head and there is an iron slab attached to his boot.

“Gold and honey indicate a transformation of the head, and therefore, naturally and logically, the brain and our understanding of thought, consciousness and all the other levels necessary to explain pictures to a hare.”

This performance was a synthesis of Beuys’ ideas about teaching and the meaning of art. It suggested the healing potential of art for a humanity which is seeking self-revitalization and hope for the future.

Céline and Heiner Bastian founded the gallery in 1989 and dedicated it to representing and exhibiting modern and contemporary art. Under the direction of second-generation Aeneas Bastian since 2016, the London gallery space opened in February 2019.

Currently the gallery in London is showing five unique Beuys sculptures alongside documentary photographs from Beuys’ early period. The exhibition, Joseph Beuys: Important Sculptures from the 1950s, is open from 20 September – 16 November 2019.