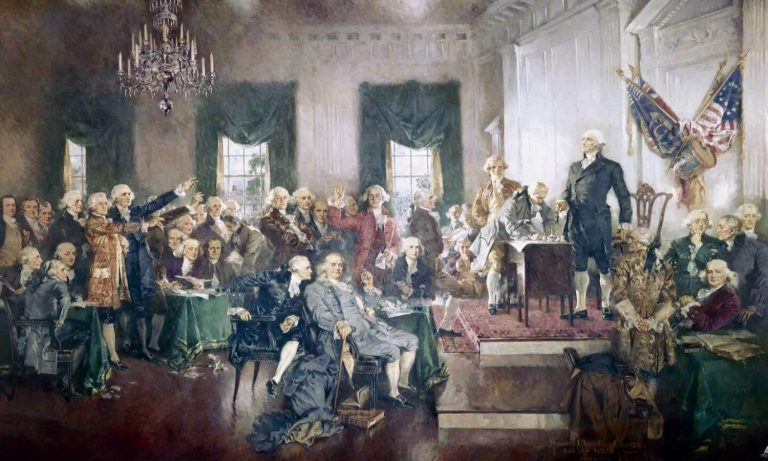 Let us take a look at a mere short list of those pieces.

The art inside the U.S. Capitol Building details America’s history. However accurate or exaggerated it may be. From the early years of exploration and interactions with Native Americans to a ceiling fresco depicting George Washington ascending into Heaven. There is so much to see and analyze.

It may look more like a Michelangelo or Raphael Renaissance fresco. But the rotunda mural is a 19th-century creation. At 180 feet off the ground, and 4,664 square feet in total size, Brumidi’s Italian-inspired design contains symbols meant to represent the U.S. government. The immediate figures around Washington represent Liberty and Victory. The other 13 in the middle represent the original 13 colonies in America.

The Baptism of Pocahontas

Most of us know the Disney version of Pocahontas: the Native-American Powhatan princess who saved and subsequently fell in love with an English explorer. Though animated films tell an aesthetically pleasing story, it is far from the truth. But as the Christian religion has played an important role in the foundations of the U.S., so too does this painting represent that moralistic notion.

Interestingly enough, it is not the only Pocahontas themed work in the Capitol Building.

Westward the Course of Empire Takes its Way

Emanuel Leutze’s larger than life mural is located in the west stairway of the Capitol Building. It contains references to much of what you may know about the westward expansion of America. Women, children, men in coonskin hats, covered wagons pulled by horses and oxen. And on the edges of the painting are more references to explorers and historical moments.

Frieze of American History and the Birth of Aviation

Over the course of nearly a century, several artists painted the continuous frieze in chronological order. It begins with Constantino Brumidi’s Landing of Columbus and ends with Allyn Cox’s The Birth of Aviation.

Overall, the art serves as an idealistic presence in the seat of the nation’s political parties. The pieces serve as a window into history and moments of victory. And while we know the history of the U.S. to be muddled with the horrific realities of how it came to be, the art inside the capitol building attempts to shine a positive light on the many people and events that built the United States from its inception over two centuries ago, to today in 2021.

The overall purpose of this article is not to take any certain political stance. However, we do not live in a vacuum. Furthermore, the events of the world around us have always affected how we see and view art. With that said, more recent images of the Capitol Building capture National Guard members inside as the government prepares for the 2021 presidential inauguration on January 20th.

It is quite an interesting sight to behold. The works inside of the Capitol and surrounding government buildings represent important moments in the growth of America…events that aided in developing the U.S. democratic process. It is jarring to see everything happening in the Capitol under the same halls that house said artwork. If you are not sure what to think of everything, join the rest of us who will be scratching at our heads for a while longer. Especially those of us living in the U.S.