Bold Is Beautiful – a Guide to Spotting a Ravinder Reddy Sculpture 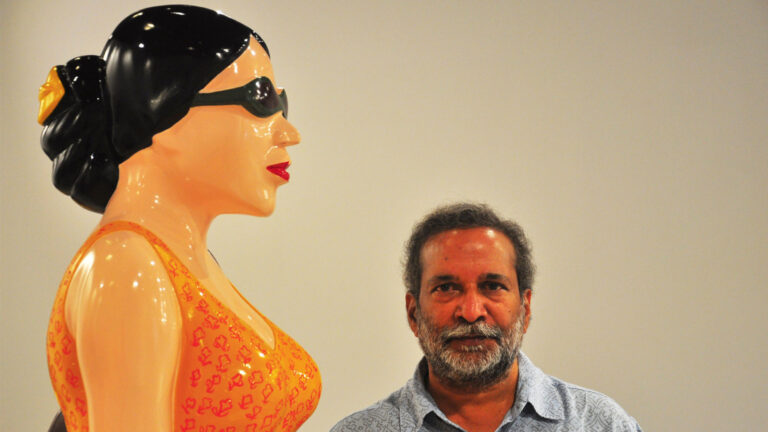 Ravinder Reddy (b. 1956) is a contemporary Indian sculptor. His sculptures of women are now some of the most recognisable examples of contemporary South Asian Art.

He studied in Vadodara, India, and also in Britain. Since the 1980s his art has been fascinated with female bodies and his style is very identifiable. While many of his contemporaries were influenced by European sculptors Reddy wanted to pursue his own style.

Here are 5 tips that will help you spot a Reddy sculpture:

“I am concerned with forms that are universally understood.”

The majority of Reddy’s subjects are women. Their bodies are stylised and striking. You could describe them as both sensual and monstrous. When creating an entire body, rather than the head alone, Reddy sculpts powerful figures in a variety of shapes. These bodies parody the ideal of feminine beauty in traditional and contemporary Indian culture.

He also often adorns the sculptures with typical South Indian accessories, striking make-up, and carefully considered hair styles. Often this adds to their remarkable grandeur by making them seem familiar as well as something other.

Society in southern India is fairly conservative. Topics, such as sex and sensuality, are taboo. Reddy’s sculptures challenge this and other notions of refined elegance. One way that they do this is by presenting nude bodies.

In 2017 Reddy exhibited his first solo show in ten years, "'Heads and Bodies, Icons and Idols." In an interview he described how his sculptures have evolved since the beginning of his career in the 1980s:

"My initial work was perhaps more sexual. Currently, the figures are more relaxed in their stance, larger, more graceful and fluid."

Often the sculptures are quite intimate, either because of their nudity, pose or context. Even his clothed sculptures focus on the unclothed female body.

Reddy’s sculptures are made on a grand scale. Usually constructed of fiberglass and wood, the monumental female heads and nudes have gotten even bigger in recent years.

Reddy's sculptures have been exhibited not just in galleries but also in public spaces, such as airports. The size, in combination with their stances and locations, make them very arresting sculptures.

"Whether it is an installation, sculpture or painting the work should have the ability to hold the viewer and convey emotion."

The size, naturally, enlarges the features of the sculptures. This allows the detail and the remarkable softness of them to be observed. "Woman holding her breasts" (above) is 175 x 100.4 x 99.8 cm for example. Her gaze falling just above the head of an average height viewer. The dominant seated position is self-assured. Nonetheless, the body is relaxed and designed to emphases the softness of her flesh.

Along with the size, it is the characteristically large eyes that make Reddy’s sculptures so confrontational. Wide, open and bold. Kohl lines the eyes, which makes their whites extremely vivid. This unblinking stare elevates what might otherwise have been a playful sculpture into something more serious. They are unflinching in their boldness.

Gold. Blue. Black. Red. Reddy’s sculptures are always bright and take some inspiration from pop art. They have also been called garish and kitsch.

In color and form the sculptures also take inspiration from traditional Indian religious statuary and depictions of Hindu goddesses.

In Hindu art golden skin is traditionally reserved for the gods. On close inspection of one of Reddy's golden statues viewers can see the rough texture of the gold leaf and often flecks of paint. From afar, they shine bright. Consequently, the gilded skin of the statues suggests that they wouldn’t be out of place in a temple.

Often their nudity or poses contradict this suggestion of divinity. Bright red nails and lips, or traditional hair styles further complicate ideas about where the sculptures belong.

Red also has symbolic meaning in Hindu culture. A bride, for example, has red henna on her hands. Red in Indian mythology denotes bravery and strength.