Painting of the Week: James Barry, King Lear Weeping over the Dead Body of Cordelia 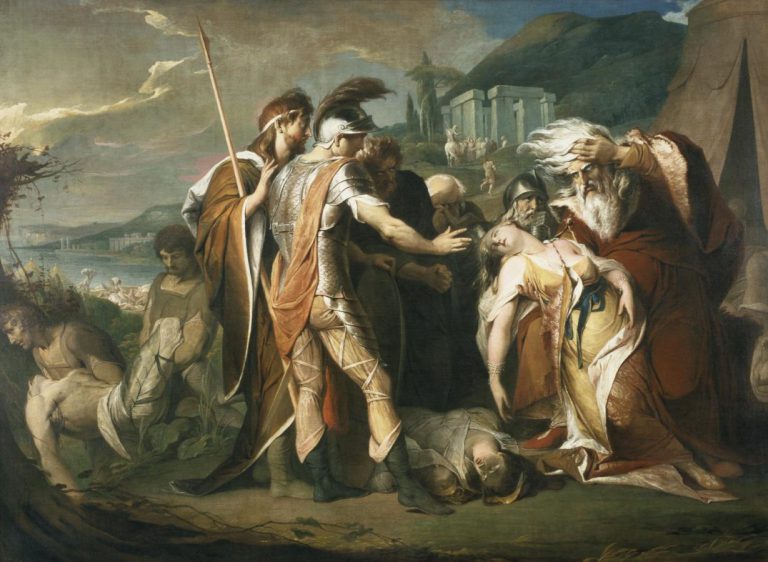 King Lear by William Shakespeare is a great tragedy that centers around ideas such as loyalty, familial bonds, and remorse. The painter of this work, James Barry, was generally interested in subject matters drawn from mythological figures and literary works. In this dramatic painting, accordingly, the artist depicts a pivotal moment in Shakespeare’s King Lear. In this part of the story, King Lear walks into the scene carrying the dead body of his daughter Cordelia in his arms.

To understand the context a bit more clearly, a small recap can be useful. Here is what happened before this dramatic scene in Barry’s painting occurred:

The old King Lear asks his three daughters to verbally declare how much they love him as a father and a mighty king. The two elder daughters, Regan and Goneril, use their most eloquent words in order to win their father’s heart. By doing this, they secure all the land and properties that they will inherit from the king.

The youngest daughter Cordelia, on the other hand, by disposition, is the most honest of them all. She kindly explains that the love she has for her father is just as much as it should be between a father and a daughter naturally, and nothing extreme. Enraged by this understatement, King Lear disowns the decent Cordelia. He also forbids any of his inheritance from passing on to her. Such an irrational and unsympathetic judgment, of course, causes Lear to face all the distressing consequences of this decision. His elder daughters kick him out of their houses, plus, he has to see Cordelia die in front of his own eyes. All this is obviously because he failed to protect his youngest daughter in the first place, preempted by his hubris.

“I might have saved her. Now she’s gone forever.-

What is ‘t thou sayst? -Her voice was ever soft,

Gentle, and low, an excellent thing in woman.”

The engraver and publisher John Boydell commissioned James Barry to paint this diligent piece for his ‘Shakespeare Gallery’ project. Just as in this painting, Barry embraced a neoclassical style in his paintings. He drew a great deal of inspiration from ancient stories and mythology, as well. Throughout his career, he produced several works depicting climactic scenes from famous stories and legends of Western literature. Later in his life, he was involved in some complications because of a publication of his. This situation led him to be expelled from the Royal Academy of Arts in London in 1799. After that, Barry died in poverty in 1806.

In the end, King Lear Weeping over the Dead Body of Cordelia is an amazing work that awakens so many emotions in the viewer after reading Shakespeare’s masterpiece. The painting is all so striking with the helpless facial expression of King Lear, the feverish gestures of the surrounding people, and the pale body of Cordelia already laying dead. Obviously, nothing can bring the poor girl back at that point.