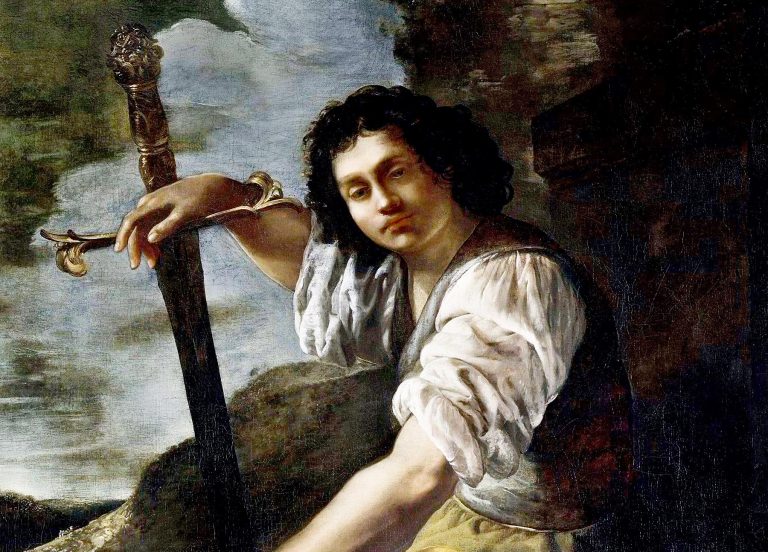 Baroque master Artemisia Gentileschi’s long-hidden signature has been discovered in a 17th century David and Goliath painting. The work was formerly attributed to a less-impressive male painter.

Artemisia Gentileschi (1593-c. 1654) is one of the female artists from the early modern period to gain widespread recognition. She is known for being a rape survivor who successfully brought her attacker to justice in court. This feat was much more difficult in the 17th century than it is today. Her dramatic and compelling paintings often feature Biblical women and other underdog heroes. Today we focus on her painting David and Goliath, which is sometimes overshadowed by her biography. (If you want to learn more about her life, we recommend this graphic novel.)

London art restorer, Simon Gillespie, announced the re-attribution in late February 2020. When Gillespie’s senior conservator, Majo Prieto Pedregal, removed some over-paint from David’s sword she revealed a hidden signature reading “Artemisia” with a partial date. Over-paint is paint added at a later date by someone other than the original artist.

Gillespie called the discovery an “amazing moment”, but it wasn’t a complete surprise. Gentileschi specialist, Gianni Papi, first suggested a Gentileschi attribution in 1996. At that time, David and Goliath hadn’t been seen in public since the 1970s, and it wasn’t in great shape. The painting was dirty, over-painted, and covered in darkened varnish. That’s probably why it was attributed to a less-important artist, her father’s student, Giovanni Francesco Guerrieri (1589-1655). Gentileschi wasn’t nearly as well known back then. Also, this is not the first time a painting has been re-attributed to her in recent years.

Despite the poor condition and incorrect attribution, Papi looked at a black-and-white photograph in an auction catalog and saw a Gentileschi where nobody else did. He announced his hypothesis in a 1996 Italian art history journal. When the work sold again in 2018, the auction house included a last-minute attribution to Gentileschi based on Papi’s article. So, the hidden signature’s discovery confirmed decades-old suspicions. In fact, the painting’s new owner and conservators all hoped for just such a discovery. Conservators looked for the signature in several other locations and had almost given up on finding one when it was unexpectedly discovered on the sword.

What told Papi that the painting was by Gentileschi? Small details. Some of the colors and fabrics in David’s clothing are similar to those appearing in Gentileschi’s other works. As is the lighting on David’s face and the background landscape. In his 1996 article, Papi said that “its atmosphere and especially in the sinuous figure of David” are particularly characteristic of Gentileschi. Other aspects of the composition, lighting, and position of the figure point to an artist of Gentileschi’s sophistication.

Art connoisseurs pride themselves on being able to recognize individual artists’ unique characteristics, much like the rest of us recognize our friends’ handwriting. They can sometimes get it wrong, although connoisseurs’ opinions can rarely be definitively proven or dis-proven. David and Goliath is one of those rare cases with a clear resolution, and it certainly proves that Papi knows Gentileschi well.

Documentary evidence suggests that King Charles I of England once owned either this painting or another Gentileschi of the same subject. Gentileschi lived in London for a while in the late 1630s to early 1640s, and she may have painted David and Goliath there. So, it is fitting that this painting’s true identity came to light in London.

It is both exciting and satisfying to see this impressive painting re-attributed to the powerful, talented, and resilient woman who created it.

The opportunity to work on this picture and closely study the technique of such an important and still overlooked female artist has been fantastic.

Artemisia Gentileschi’s David and Goliath is not the first artwork to appear in a new light after restoration. In 2019, conservators in Dresden, Germany found a secret painting-in-a-painting in Johannes Vermeer’s Girl Reading a Letter at an Open Window.