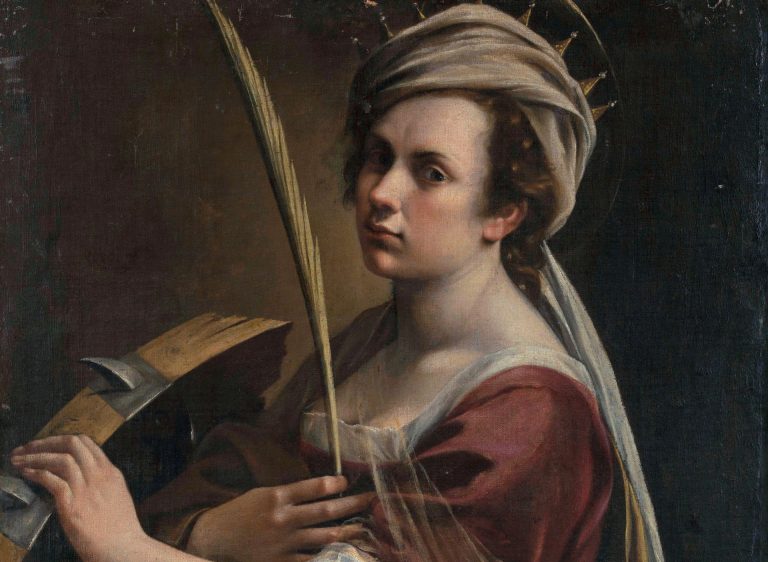 Baroque’s most famous woman painter – Artemisia Gentileschi had a riveting life story. It was told and shown by Gina Siciliano in her beautifully published graphic novel. Read the review of I Know What I Am book.

Allow me to start with a small disclosure: I am no graphic novel expert. It is new territory for me. And an interesting one at that, since the challenges the authors face are inherently different from the classic novel. Consider, for example, space, there simply is not enough of it for extensive descriptions or pages-long dialogue. On the other hand, we all know that a picture is worth a thousand words. Even the fact that the characters have to be easily recognizable, for there is no way to easily introduce them every time they speak, can pose a challenge. Also, a lot of the emotional impact is transferred from the vocabulary layer to the imagery, which makes for a completely different interaction.

For Gina Siciliano, her adventure with Artemisia Gentileschi started in 2007 when she saw Judith Slaying Holofernes, at the Uffizi in Florence. The painting resonated with her so much that she spent the next seven years immersed in research. The fruit of her work is this book. A balancing act between conveying as much information as possible and keeping the book interesting and visually pleasing. To make this happen without interrupting the reader’s flow Siciliano added abundant notes at the end of the book, that provide additional in-depth information, they are not your typical footnotes, so do not skip them!

Siciliano does not focus solely on Gentileschi. In fact, she creates an entire world around her. We get to know the political situation at the time, the situation of women in the society, the struggles of painters and their patrons. What I found fascinating was the environment where artists not only wield a brush and a palette but often also a knife and a sword. An environment that was very different from the 19th-century notions of poor, suffering artistic souls that often feed our imagination.

In that highly competitive world, Gentileschi managed to make a name for herself and became the first woman admitted to Accademia delle Arti del Disegno in Florence. Competing and meeting with the best painters of her time and never doubting she is their equal. It is an extraordinary feat if you consider that she has been raped as a teenager, had to undergo a long trial where she was tortured, then was married off to save her honor only to become a single mother and survive the death of some of her children.

Gentileschi’s personal life was far from stable. Yet, the striking thing is that in all the turmoil she always focused on her painting. Becoming one of the best painters in the generation after Caravaggio. Initially inspired by him she crafted her own language. Through the selection of her subjects and her mastery in painting the female figure to her bold and innovative use of color.

Gina Siciliano takes us on a fascinating adventure. Allowing the readers to meet this extraordinary woman, and others like her. Giving us a chance to understand her times better and the forces that formed her as an artist and as a human being. Siciliano’s passion is visible in her approach to every facet of the story. Detailed when required, but also concise when the visuals can tell the story themselves.

She expertly copies many of  Gentileschi’s works, deftly distinguishing her own visual language from the artwork she replicates. The only thing I missed, especially towards the end, was the color. On the other hand, black and white allow us to focus on what is really important. It is a beautifully published book, that will take you for a fascinating trip to the 17th century Rome, Florence, Venice and Naples.

Gina Siciliano graduated from Pacific Northwest College of Art in 2007. She is an artist, a bookseller, as well as a drummer and a vocalist of two rock bands. She’s been self-publishing her comics for many years, and I Know What I Am is her first book published by Fantagraphics. She lives in Seattle, WA.

I received a copy of this book from the publisher, Fantagraphics, in exchange for an honest review.