Painting of the Week: Artemisia Gentileschi, Self Portrait as Saint Catherine of Alexandria 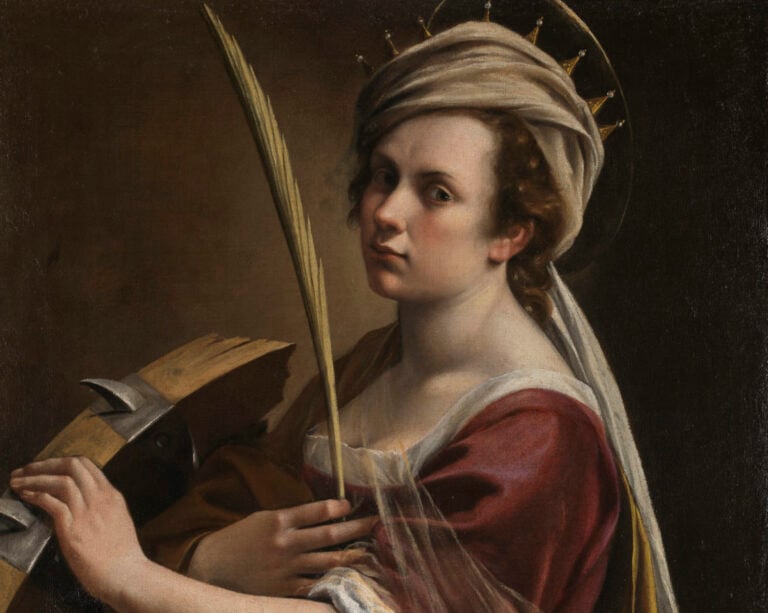 Artemisia Gentileschi (1593 – c. 1656) was ‘one of the best Italian Baroque painters.’ Despite this, you won’t find any of her works in the National Gallery of Art in Washington, D.C., nor in the Louvre in Paris. Like so many women in history, Gentileschi has long been marginalised.

But not anymore. In 2018 the National Gallery in London purchased her Self Portrait as Saint Catherine of Alexandria (1615 – 17) for £3.6 million (around $4.5 million). This might sound like a lot, but it was certainly worth it, with the Guardian art critic Jonathan Jones describing it as ‘one of the most important purchases the National Gallery has ever made.’ It’s not hard to see why: in a collection of over 2300 works, there were only 20 female artists featured before the purchase of Gentileschi’s striking self-portrait, which was the first work by a female artist to be acquired by the National Gallery since 1991.

Gentileschi’s importance in the history of art should not be reduced to her gender, however; she was immeasurably talented, with Hannah Rothschild, the current Chair of the National Gallery’s Board of Trustees, describing her as ‘a pioneer, a master storyteller, and one of the most progressive and expressive painters of the period.’ Her career spanned more than 40 years and she became the first female member of Florence’s Academy of Fine Arts. The intensity of her works is second only to those of Caravaggio, whom she may have met as a child. Caravaggio’s influence on her can be seen in, for instance, Judith Beheading Holofernes (1611 – 1612, Uffizi Gallery, Florence). Our painting of the week is, however, recently discovered Self Portrait as Saint Catherine of Alexandria, as it provides a window not only into the art scene in which she lived, but also her own life and struggles.

Pictured here is the painting after it underwent extensive restoration; restored now to its former glory, the work is going on tour around the UK as part of Artemisia Visits. The first stop on this tour was Glasgow Women’s Library, the UK’s only accredited museum dedicated to women’s history. Because of the unusual nature of some of the venues playing host to the portrait (including an all girls’ school and a health centre), the National Gallery has not yet announced where the portrait will be heading after the Women’s Library, where it was on display until March 19th. In 2020, the National Gallery itself will stage the UK’s first major exhibition of the work of Artemisia Gentileschi.

Earlier this month, I visited Glasgow Women’s Library and went to see the portrait, which is truly captivating, especially since it is the only painting on display there, allowing the viewer to dedicate all of their attention to it. As its name indicates, Self Portrait as Saint Catherine of Alexandria is essentially two works in one. It displays on the one hand Saint Catherine, whom the Roman Emperor Maxentius in the early 4th century sentenced to death on a spiked breaking wheel which, according to legend, shattered at her touch. In the painting we can see the broken wheel, which incidentally is where the name for the Catherine Wheel firework comes from.

Despite its Biblical theme (indicated by the halo over Catherine’s head), this is also a self-portrait. It is Gentileschi looking out at us with those confident, searching eyes, and the palm frond in her hand serves not only as the symbol for Catherine’s martyrdom but also for the paint brush of Gentileschi the artist. We can draw obvious parallels between this and Gentileschi’s later work, Self-Portrait as the Allegory of Painting (1638 – 1639, Royal Collection, Windsor), which depicts Gentileschi in the process of painting.

In this light, the broken wheel in Catherine’s hand is also symbolic of the suffering Gentileschi herself endured. After being raped at the age of 17 by the artist Agostino Tassi, who worked in her father’s studio, she was subsequently tortured during Tassi’s trial, which was ostensibly done to ensure that she told the truth. Despite all of this, her powerful stare in this self-portrait attests to her unbroken spirit.

Her right hand is pressed to her chest, emphasising her femininity, and the painting is striking for its beauty. The crown on her head, meanwhile, turns her almost into a Christ-figure. This Women’s History Month, at a time when more and more women are speaking out about the injustices they face on a daily basis, there is surely no better symbol for the strength of women than Artemisia Gentileschi’s Self Portrait as Saint Catherine of Alexandria.