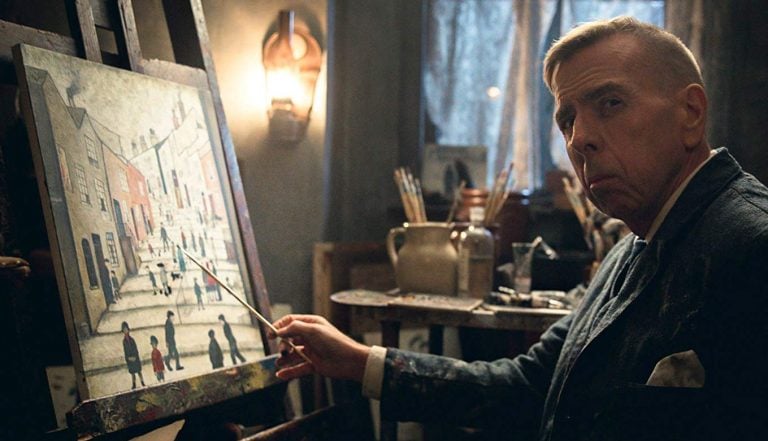 Mrs Lowry & Son was the closing film during the 73rd Edinburgh International Film Festival in 2019. Timothy Spall (aka Peter Pettigrew in the Harry Potter films) starred as the English painter L. S. Lowry (1887–1976). Spall has a habit for playing English artists; for instance, in 2014, he starred in Mr. Turner as the eponymous Romantic painter.

L.S. Lowry was born in 1887, in Lancashire in North West England, from where I too hail. He loved to depict industrial, working-class life, and he has a distinctive, matchstick-like style. Today his works are celebrated in The Lowry, a state-of-the-art theatre and gallery complex in Salford, Greater Manchester, UK.

His works are not perhaps for everyone, but you don’t have to like Lowry or his art to enjoy the movie Mrs Lowry & Son, which is an excellent dual-biography of both Lowry and his fiery mother, Elizabeth, played here by Vanessa Redgrave.

Elderly, widowed, and bedbound, Mrs Lowry is dependent on her son for everything, and he remains dutiful, patient, and loving – despite his mother’s often harsh manner.

Cinema is littered with romantic love stories, so it’s refreshing to have a love story of a different kind: that of the love of a son for his mother, and vice versa. The acting is excellent, as one would expect from these two superstars, and despite how horrible Mrs Lowry often acts towards her patient son, Redgrave manages to keep us sympathizing with this lonely, disappointed woman.

As Lowry tells us, in his beautiful Lancashire accent:

I’m a man who paints – nothing more, nothing less.

Yet, as we see over the course of the film, he’s much more than just a painter: cheerful, compassionate, and dedicated, we see Lowry amuse the local kids on his walks through the town, pretending not to see them following him.

“There’s beauty in everything,” he says. “A man just has to open his eyes and look.” His mother is not convinced, however. She’s a snob who looks down on the working class people, and she’s embarrassed by what she describes as her son’s “hobby.”

“It’s not a hobby,” he tries to explain to her. “I have to do it. I’m compelled to put down everything. I need to capture a way of life… The truth.”

As I was watching Mrs Lowry & Son, I thought: Yes, this film really understands the relationship between an artist and his art – a compulsive, intrinsic, indissoluble relationship.

The central conflict in the film is Mrs Lowry’s contempt for her son’s art, which deeply hurts him. You get the sense that Lowry doesn’t care what the public or the art world thinks of him – he only wants recognition from his mother. She, however, seems to resent him, his comparative youth reminding her of her old age and approaching death. “I just lie here,” she complains. “Waiting for the inevitable.”

Lowry painted the world as he saw it, and director Adrian Noble approaches Lowry’s life with the same quiet, understated realism. For anyone with an interest in art, Mrs Lowry & Son is a must-see. Not having thought much of L. S. Lowry before, I left the film with a deeper appreciation for his talented, idiosyncratic style.