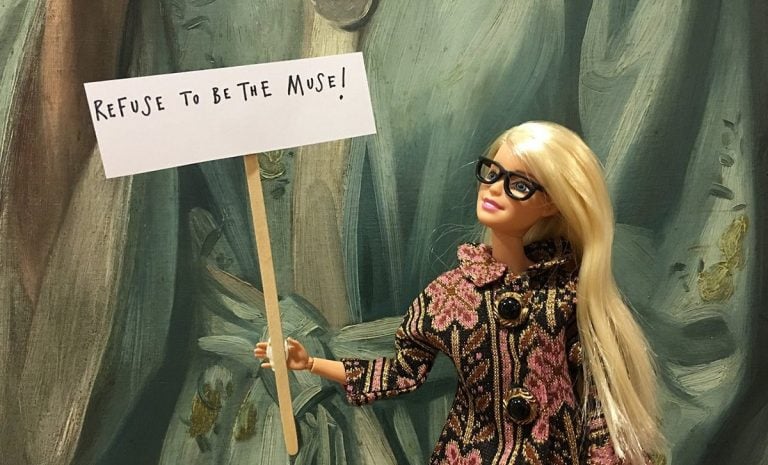 Art Activist Barbie has been showing up in museums and galleries for over four years, criticizing the male-dominated art world. Holding a lollipop stick, Art Activist Barbie uses small signs to ask big questions in fabulous outfits. That is actually her mantra. But who is she and how did this initiative begin? How did Barbie, a symbol of stereotypical beauty and capitalism, become a feminist and an activist?

Who Is Art Activist Barbie?

The person behind her is Sarah Williamson, a senior lecturer in education and professional development at the University of Huddersfield, UK. A few years ago, Williamson was trying to come up with ideas to engage her students with social justice matters. Specifically, she wanted to address the troublesome way in which women have been represented in art.

In 2018 she came up with an idea. She took a bunch of students to the local art gallery and gave each of them a Barbie doll. Their task was to intervene in the gallery by posing their doll with commentary on a placard. The feedback was very positive. Thus, Williamson realized she found the perfect way to engage people in gender politics. And so, Art Activist Barbie was born.

Barbie has been long criticized for her non-realistic looks. She is a symbol of unattainable Western beauty standards that women are expected to fulfill; another means of oppression. It was exactly this controversy that Williamson wanted to exploit. So, she reinvented Barbie: from a plastic bimbo, she became a feminist activist. Williamson uses the doll’s popularity to draw attention to gender inequality in art galleries and institutions.

Art Activist Barbie’s outfits are also an important part of her cause. She wears handmade clothes from the 1970s that Williamson’s mother created. Nowadays, her older sister sews them. The concept is that one can be both stylish and a feminist. It reminds me of what Roxane Gay stated in her book Bad Feminist. Besides, one of the things that feminism stands for is self-determination. It shakes off conscious and unconscious patriarchal beliefs in all shapes and forms. In this case, one should be free to dress however they want without being excluded from a group or a cause because of it.

Thus Barbie puts on her couture and takes on the art world. All the dolls are curated in such a way to reverberate the artworks. Sometimes they do so in a mocking way. Other times, they celebrate positive female representation. Barbie became a thinker, a woman that stands for feminism.

In the 1970s, Linda Nochlin wrote her famous essay Why Have There Been No Great Women Artists. According to some, it is the first major work of feminist history. The essay explains the reasons why female artists of the past couldn’t work or gain recognition in their profession due to the lack of equal education and representation. Then, in the 1980s, the Guerilla Girls used clever short messages on huge billboards to highlight white, male, and Eurocentric art history.

Yet decades later, the problem still persists. Galleries and museums are supposed to be neutral. They are not the typical place for political or social protest. However, Art Activist Barbie has proved the exact opposite. Through her Twitter account, BarbieReports, she visits galleries and museums and points out that they are everything but neutral. Their displays are full of works commissioned, produced, and collected by men. Therefore, they represent centuries of male power.

Silently beautiful muses with no name… bathing or charmingly engaged in the joys of domestic, reading, and sewing […] fashionable and beautiful trophies of society and marriage and examples of motherhood.

However, the false representation of women is not the only issue. There is gigantic gender inequality in the art world. For example, Black individuals are shown (if they are shown) mostly as slaves in humiliating depictions. Let’s not even talk about the representation of Black artists in galleries. That’s dismal. The thing is that museums and galleries, especially those with historical collections, show a male-dominated view of the world. That is, artworks that are considered historically the most important, are also the ones that present the male perspective.

Art Activist Barbie acknowledges the influential role that these places have in the shaping of a society’s identity. So, she tries to make them have more balanced “by reflecting the lives and experiences of women, ethnic minorities, and other under-represented groups”. Nevertheless, she doesn’t miss a chance to pay her respects or show her enthusiasm when she finally comes across a female artist.

The overall reactions to Art Activist Barbie are positive and encouraging. Many spot her in a crowded room and take photos. Viewers are delighted by the feminist messages, and the discussion of gender issues not only in art, but in society in general. Complete strangers start talking to each other about the artworks. However, there are also those who are shocked by the placards. As for the staff, sometimes they observe approvingly, sometimes they call security.

The art world has interesting reactions too. In 2019, the National Gallery in London promised to change its perspective. In May, they created the initiative Curator: Missing Narratives of Women. They also asked Art Activist Barbie to guest curate an exhibition in North England. In April 2019, Waldemar Januszak apologized for not showing enough women artists in his Sunday Times History of Art.

The voices are growing and big institutions are realizing they can no longer blame history, It’s time to redress the balance. Stylishly, of course.

During the Covid pandemic, Art Activist Barbie stayed inside due to the lockdown measures. However, she continued her work online: she shared archives, and re-contextualized herself in alternative settings. Moreover, she celebrated other forgotten leading women, such as geologist Mary Annings. She also comments on relevant news. For example, she congratulated Kamala Harris for her election as America’s first female Vice-President.