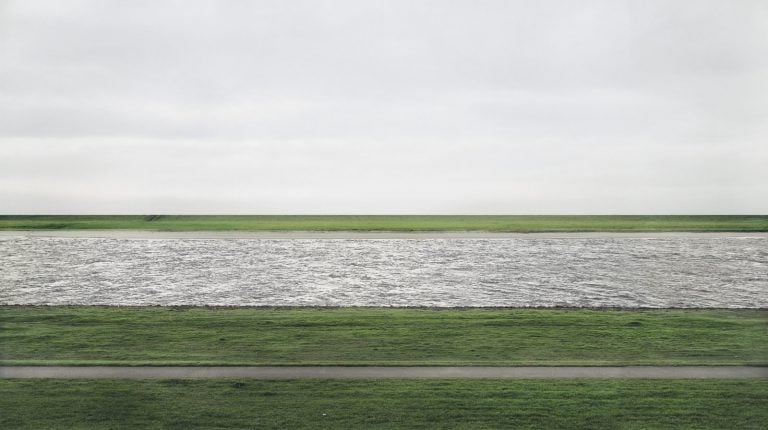 It seems to be one of those pictures you may accidentally take on holiday when the weather is bad. Rhine II by Andreas Gursky is not a photo we instantly feel an affinity to. It feels bland, boring, and even depressing when you first see it. And you may ask yourself what the fuss is about. Why did someone decide to pay $4 million for it in 2011, making it the most expensive photograph sold at the time? Take another look at it with us and see if your perception changes.

Andreas Gursky was born in 1955 in Leipzig, but by 1957 his parents moved to Düsseldorf, and it was here that Gursky attended the Kunstakademie. There, he had the chance to study under Berndt and Hilla Becher, known for their water towers photographs fame. Their systematic approach to photography, obsessive sticking with one vantage point, and scientific approach had a huge impact on him. By the 1990s, Gursky had created his own style. He kept some of Becher’s feel, but also utilized color, and digitally edited his images. His goal is not pure documentation, but the creation or re-creation of the ideal which he visualizes in his mind’s eye. He often explores large-scale images and repetition of a multitude of smaller elements and the patterns they create when the scale is disrupted.

The Rhine is one of the largest rivers in Europe. Since the times of the Roman Empire, it has been a “working river” of great significance in transporting goods both inland and to the seaports. The role of the Rhine has not changed, it is still one of the most important transportation routes in Europe. Because of that, almost the entire length of the river is heavily industrialized. The river is not allowed to flow freely but is constantly being optimized for human purposes.

The Rhine also has great significance in German culture. Often described as Vater Rhein, the father river of the land. It features heavily in fairy tales, folklore, and even Wagner’s work. Romantic painters like Caspar David Friedrich and Joseph Anton Koch took inspiration from the meandering river and its history. But the Rhine’s influence did not stop at the end of Romanticism. It is still present in the work of Anselm Kiefer and Gerhard Richter. Gursky lives in Düsseldorf, a city built at the confluence of the rivers Rhine and Düssel, so for him, as for many of his art historical predecessors, the Rhine is of almost totemic significance.

Let’s start with the purely physical side of things. Rhine II is a plexiglass mounted print, 350cm x 200cm in size. Only six prints have been made, four of which are in museums (Museum of Modern Art, New York, Tate Modern, London, Pinakothek der Moderne, Munich, and Glenstone, Potomac), which partially justifies the price. It is a part of a series of six photographs of Rhine, the remaining ones being smaller prints.

The composition of the photograph defies the rules traditionally applied in photography. Having a horizon right in the middle is something amateur photographers are told to avoid at all cost. We then see the strips of grass, the river, and the pathway. The longer we look at the horizontal stripes of color the more abstract they become. Interchanging shades of gray and green, with different textures, they divorce themselves from the representation of the landscape. On the screen, it it hard to imagine the full force of the print but keep in mind its sheer scale. You are met with a photograph that is larger than you in every sense.

It is an apparently natural landscape. We see almost no indication of human interference, only the stairs on the left in the background and the pathway. And yet, it all feels artificial, no natural landscape would ever follow lines so straight, it is just not organic. Interestingly, all other signs of human existence, such as runners and industrial buildings in the background have been edited out of the picture. And yet there is a profound sense of the river being bound and controlled by human activity. Gursky wanted to show us the picture he had in his mind, a Platonic ideal, in his own words:

“I wasn’t interested in an unusual, possibly picturesque view of the Rhine, but in the most contemporary possible view of it. Paradoxically, this view of the Rhine cannot be obtained in situ; a fictitious construction was required to provide an accurate image of a modern river.”

On the surface the message is clear, the human relationship with nature, a trope so often explored in Romanticism. And yet it is a twist on the old cliche, where nature is ferocious and humans small in the face of it. Nature is subdued, and humans control it even if they are not visible. It speaks of the distance that industry created between us and nature, control makes intimacy impossible. This is why the picture feels so cold.

The river still ripples in an unruly surface though, reminding us we cannot control everything. The message is really quite simple here, one which was often leveled as an accusation. On the other hand, you may say it is sublimely distilled, down to its very essence.

The horizontal lines bring a sense of calm and lack of disturbance. It is a photograph you can meditate on, your eyes slowly following the horizontal lines from left to right, only to change direction and start jumping the stripes of color top to bottom and back to top again.

It is a picture to get lost in, but also one that is not inviting. The photo challenges us to see if we will look away, if we will take the easier path of finding something more appealing to rest our eyes on. Will we choose to take responsibility for what we’ve done to nature, or will we pretend nothing has happened? Or maybe there is a sense of pride in having been able to subdue a river as powerful as the Rhine?