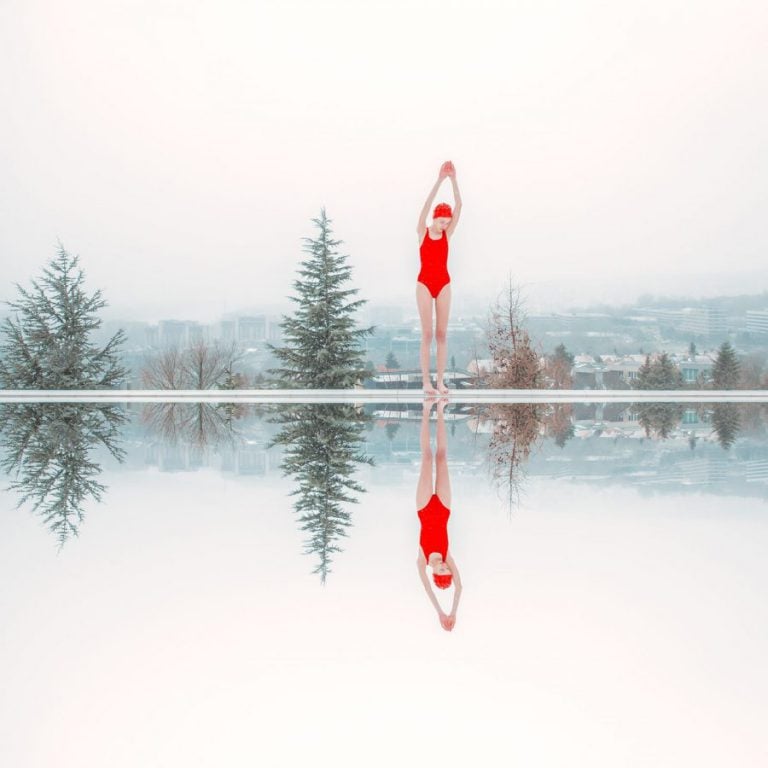 Mária Švarbová is a talented, young, Slovakian, female photographer. She is known for her conceptual and minimalistic photographic series, immersed in a Socialist Modernist architecture and radiating an intimate atmosphere, ruled geometry, and color balance. The Swimming Pool series, which confirmed her talent and started her photographic career, gradually turned into various photographic cycles thanks to which she gained international recognition. Švarbová’s compositions hold a celebratory elegance that transforms the viewer’s gaze into an enduring reverence for life’s simple beauty.

Mária Švarbová was born in Slovakia in 1988. Despite studying restoration and archeology, she slowly began to perceive the world through a camera lens and thus her preferred artistic medium became photography. She has photographed advertising campaigns for international companies such as Apple, Murata, and the Museum of Ice Cream in New York. Also her photos have been presented in exhibitions in galleries and museums around the world.

She managed to win a prestigious Hasselblad Masters Award in the Fine Art category in 2018, for which she is currently an ambassador. In 2017, Forbes magazine listed her in their Slovak 30 under 30 ranking. From 2010 to the present day, the immediacy of Švarbová’s photographic instinct continues to garner international acclaim and is setting new precedents in photographic expression.

Prestigious awards and her solo and group exhibitions have placed her among the vanguard of her contemporaries, attracting features in Vogue, Forbes, CNN, The Guardian, and other publications from around the world. Mária’s reputation also earned her a commission for a billboard-sized promotion on the massive Taipei 101 tower, in Taiwan. Her work even influenced fashion when the Spanish fashion house Delpozo took inspiration from her work.

The key photographic series for which Mária Švarbová gained the most success and international recognition is the Swimming Pool. This series was inspired by functionalist architecture, the purity of space, but also by the atmosphere of socialism and especially the swimming pools built under this regime.

In four years by mapping local swimming pools, from the old and often closed to the public pools to the open and more accessible ones, she was able to take more than a hundred shots of thirteen swimming pools in thirteen different cities in her home country.

The very first swimming pool captured by Mária Švarbová is located in her hometown Zlaté Moravce. It is 80 years old and belongs to a local high school. It dates back to a time when swimming was more a social duty than a sport.

All of the pools she photographed (13 pools in 13 Slovakian cities) were built between 1920 and 1970. Their stark colors, repetitive lines, spaciousness, and lack of ornamentation exemplify the functionalist architecture that dominated the region from 1948 to 1989 when Slovakia – then part of former Czechoslovakia – was a communist state.

Merging with the background, she enlisted mostly young female models in primary-colored swimsuits and rubber swimming caps. Furthermore, each model’s swimsuit was carefully chosen to complement their location. In some of her photographs, Mária Švarbová also added angular positions and repetitive effects, based on the aesthetics and inspiration from the Spartakiads, mass gymnastic events. These were organized by the communist government and in them thousands of participants performed routines in unison.

“I like water because, for me, it’s a mirror or other side of the world. My photographs are my imaginary world. I would like to show people other side of normal life.”

Signs with safety maintenance, rules, and, bans on swimming pools often appear in her photographs. She was fascinated by the fact that in a space that should be relaxing, the prohibition signs determine how to behave, what we can or cannot do. Švarbová uses, for example, the ‘do not jump’ sign (‘zákaz skákať’ in the Slovak language), which cleverly manipulates people in the swimming pool.

Her typical expressive elements such as the absence of emotions, clean and balanced lines, minimalist scenes, or the front view are first experimented with in the Swimming Pool series. They continue to be a constant presence in her more recent works.

Švarbová’s distinctive style expressed through her photographs in The Butcher series focuses again on frozen compositions and experimentation with space, color, and atmosphere. Taking an interest in architecture and public spaces from Socialist Modernism, Švarbová transforms each scene with a modern freshness that highlights the depth and range of her creative palette.

The human body throughout her oeuvre is more or less a peripheral afterthought, often portrayed as aloof and demure rather than substantive. Carefully composed figures create thematic, dream-like scenes with ordinary objects. Models are part of the space and Švarbová tries to harmonize them with each other and with the architecture. Her images hold a silent tension that hints at emergent possibilities under the lilt of clean and smooth surfaces.

There is often a sense of cool detachment and liminality in Švarbová’s work, as evidenced by The Doctor series. Routine actions such as exercise, domestic tasks, shopping, or as in this case doctor appointments, are reframed with a visual purity that is soothing and symmetrical and at times reverberant with an ethereal stillness. The overall effect evokes a contemplative silence in an extended moment of promise and awareness—a quality difficult to achieve in the rapid pace of modern life.

Despite the strict geometry and austere shapes, the photographs act lightly. The photographer does not refer to the positives or negatives of Socialism through architecture and a man set in certain interiors. On the contrary, the architecture plays the background role in the photographs, portraying the atmosphere of childhood memories, not only those of Švarbová but also of other people who grew up in the Socialist or Post-Socialist era.

In Švarbová’s photographs, time seems to stop. However it is only a visual return, resembling a past era in which we can absorb its timelessness and relativity. We find the same timelessness in Edward Hopper‘s paintings. That is one of the reasons why she called her photographs Futuro Retro: as a Nostalgic Futurism.

Despite the retro setting, the pictures somehow evoke a futuristic feeling as well, as if they were taken somewhere completely alien. There is no disturbing emotion, there is no individuality in their stillness. The artificial detachment, created by the artist’s visual vision, allows unique visual pleasure unattainable in real life.

As Mária Švarbová herself claims, her inspiration for space also comes from cinematography. In her other series such as the Dining Room, Plastic People, Human Space, or Generations we can see a resemblance to the spatial cinematographic shots from the movies of the Swedish film director Roy Andersson.

Space, where the characters are placed, was created by man. It is his space, intended for him. According to Švarbová, a person cannot be without space and vice versa. Subsequently characters set in space indicate the scale and refer to the human layer. At the same time, they act robotically, like mannequins. Therefore, in her photographs there are many young bodies, vital and perfect, which only emphasize that perfect mechanicality and formlessness.

“Space has no meaning without humans. It becomes empty – something is missing.”

Švarbová does not try to indicate the emotion that the viewer should feel. This is why her characters stand upright, without emotions. They are a medium for the viewer’s feelings, which plunge into the atmosphere of photography through them.

Since the expression in a painting often tells us the atmosphere, in Švarbová’s photographs the viewer chooses what emotion the photograph evokes; he is the one who decides. The viewer transforms the image through a model that has absolutely no emotion. By the absence of emotions, it gives the viewer the space to experience his own.

Mária Švarbová, whose “photographic calligraphy” is recognized by people also thanks to the taste of Socialism, was among the artists whom Apple approached for a collaboration. The exclusive series of ten photos, which Švarbová took with the iPhone XS exclusively for Apple’s official Instagram account, fell into the big concept of Plastic World.

Švarbová explains that the inspiration for this photo (above) was how employees work at the Chernobyl power plant.

These photographs depict people without emotions and reflect their emptiness and inability to change anything. Even though this series was photographed in two hours and in an unconventional way – on a mobile phone – Švarbová’s imprint can still be felt. The dominance of pastel colors and uniformity is set in a socialist environment that is close to Slavic latitudes.

The series also includes photographs with the swimming pool theme, reminiscent of Švarbová’s early work. However, instead of water, colorful sweets are placed in the light pink pool.

Mária Švarbová’s postmodern vision boldly articulates a dialog that compels the viewer to respond to the mystery, loneliness, and isolation of the human experience.

In 2017, her photographic collection was published in a book named Swimming Pool. After its positive reception, in 2019 her new book entitled Futuro-Retro came to life. Now she continues to transform her vision into photographs with help of her Hasselblad and the immediacy of her photographic instinct is setting new precedents in photographic expression.