The A to Z of Ancient Greek Pottery Terms Pt 2 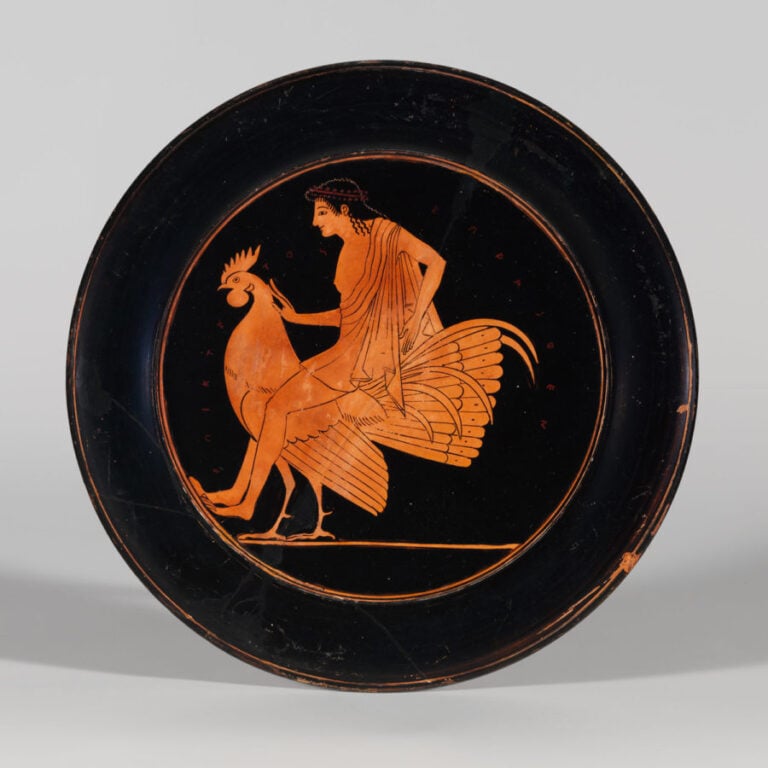 And so the saga continues in our adventures of learning about Ancient Greek pottery!

You will probably have noticed that I chose to skip a few letters of the alphabet in this article and the previous one on the same topic. It is not because there is a lack of terminology for these letters, but rather because I wanted to focus on those terms with correlating images of pieces of Ancient Greek pottery.

Lekythos: The lekythos is an oil bottle. It is one of the most common shapes; the lekythos was used for either scented oils or for household oils, such as those used in cooking. [caption id="attachment_16745" align="aligncenter" width="382"] 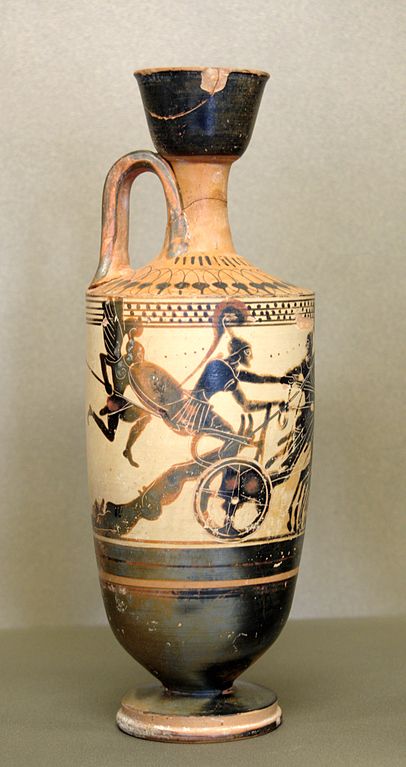 Diosphos Painter, Achilles dragging the body of Hector, White-ground lekythos, The Louvre Museum: Paris[/caption] Loutrophoros (pl. Loutrophoroi): This particular piece of pottery was used to hold water for the ceremonial bathing of either a bride or groom; as a grave marker and also in burial rites. The literal translation of the term loutrophoros is 'bath carrier.' Andrew Clark et al states, however, that it is not definite whether the term loutrophoros refers to the pottery itself or the person carrying it. While several themes and motifs decorate this particular vase, the two which stand out are of weddings or funerals. [caption id="attachment_16746" align="aligncenter" width="461"] 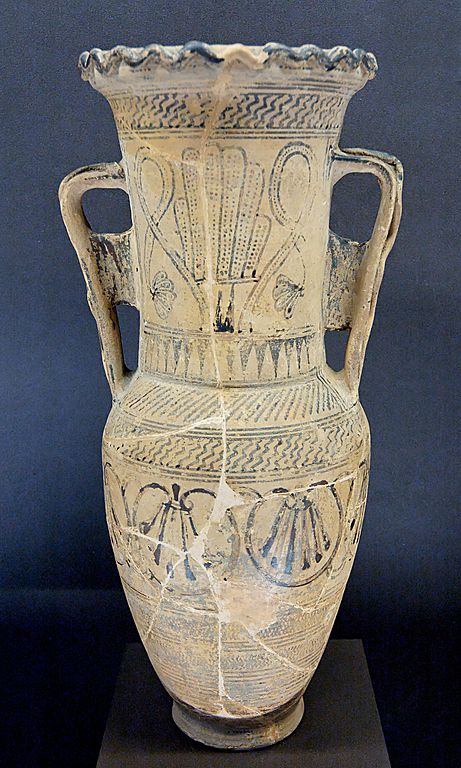 Mastos: A mastos was a wine-shaped cup shaped like a woman's breast. Rather than having a stem or foot, the mastos comes to a point at its bottom in a similar shape to a nipple. [caption id="attachment_16747" align="aligncenter" width="771"] 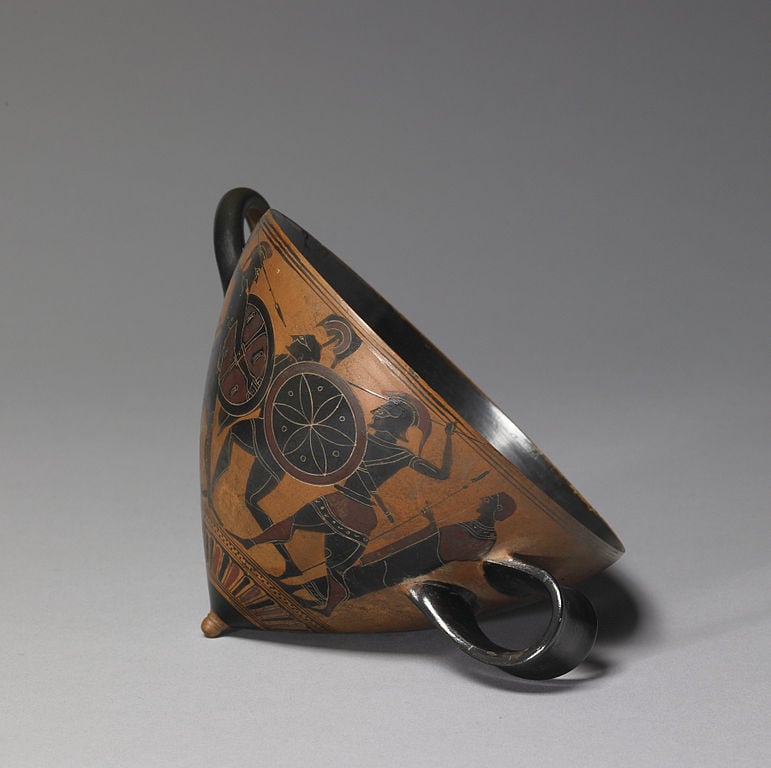 Black-figure Mastos with combat scenes, ca. 530 BC, Walters Art Museum: Baltimore[/caption] Meander: A meander is a design pattern that stems from the Geometric era of Ancient Greece. Also known as a 'Greek key,' the meander came in varying degrees of intricacy. The term comes from the the Meander river in Turkey. [caption id="attachment_16748" align="aligncenter" width="501"] 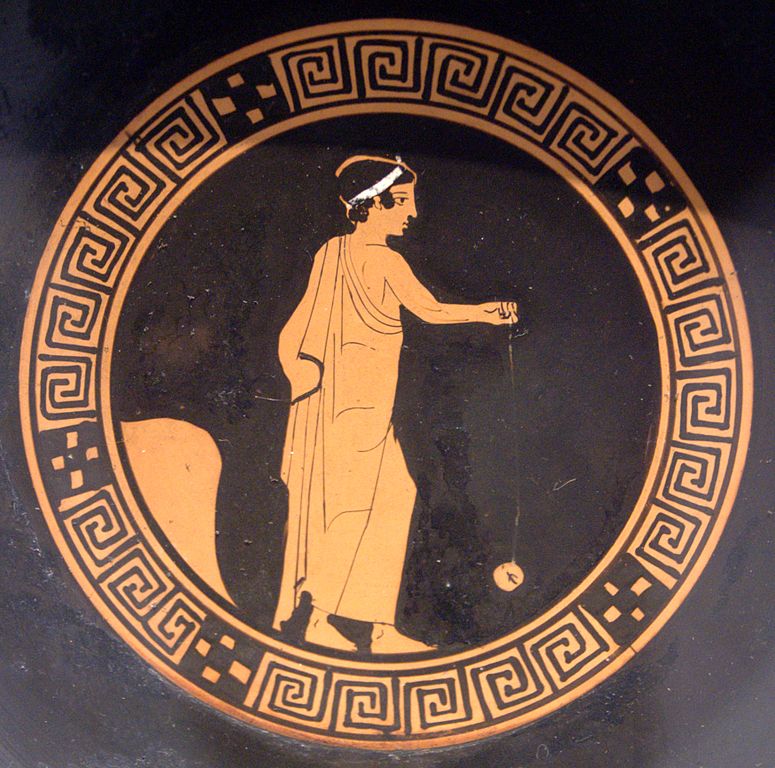 Oinochoe: Oinochoe is probably one of the hardest terms to pronounce...for me anyway! It is a pitcher used to serve wine. Like many other pottery examples, the designs on the side of the oinochoe reflected scenes of drinking or the mythological Dionysos and the myriad of other figures. The oinochoe came in varying shapes, and was used in many festivals in Ancient Greece. [caption id="attachment_16749" align="aligncenter" width="720"] 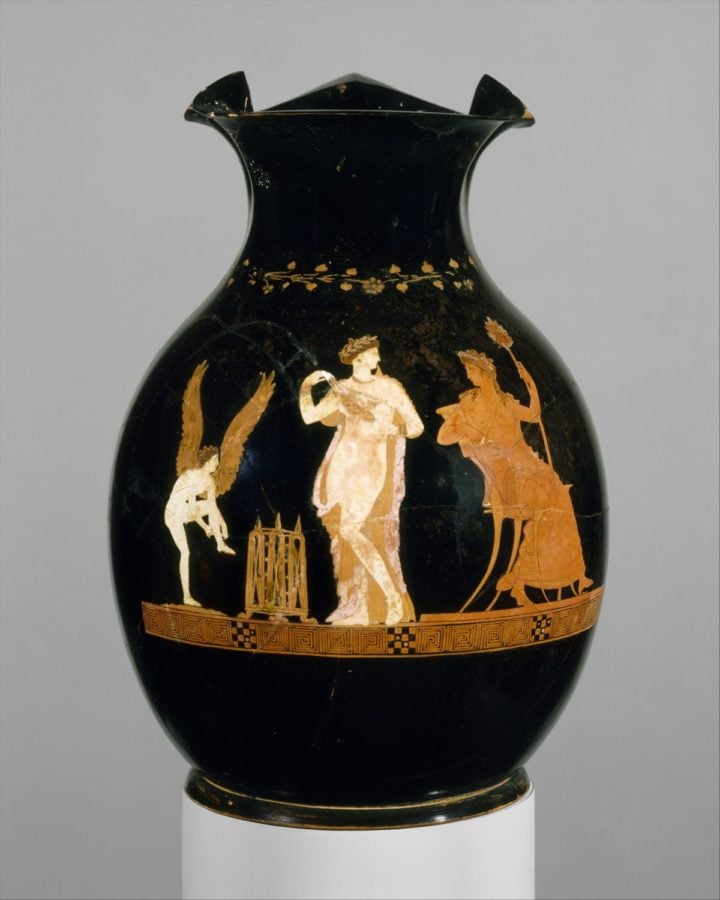 Terracotta oinochoe, mid-4th century BC, Metropolitan Museum of Art: New York City[/caption] Oon (pl. oa): The oon is a small, egg-shaped vase. It was an uncommon shape, and therefore is considered a rare style of pottery. The oon came in varying forms with either no lid at all, a lid, or a small hole at both ends. [caption id="attachment_16750" align="aligncenter" width="1200"] 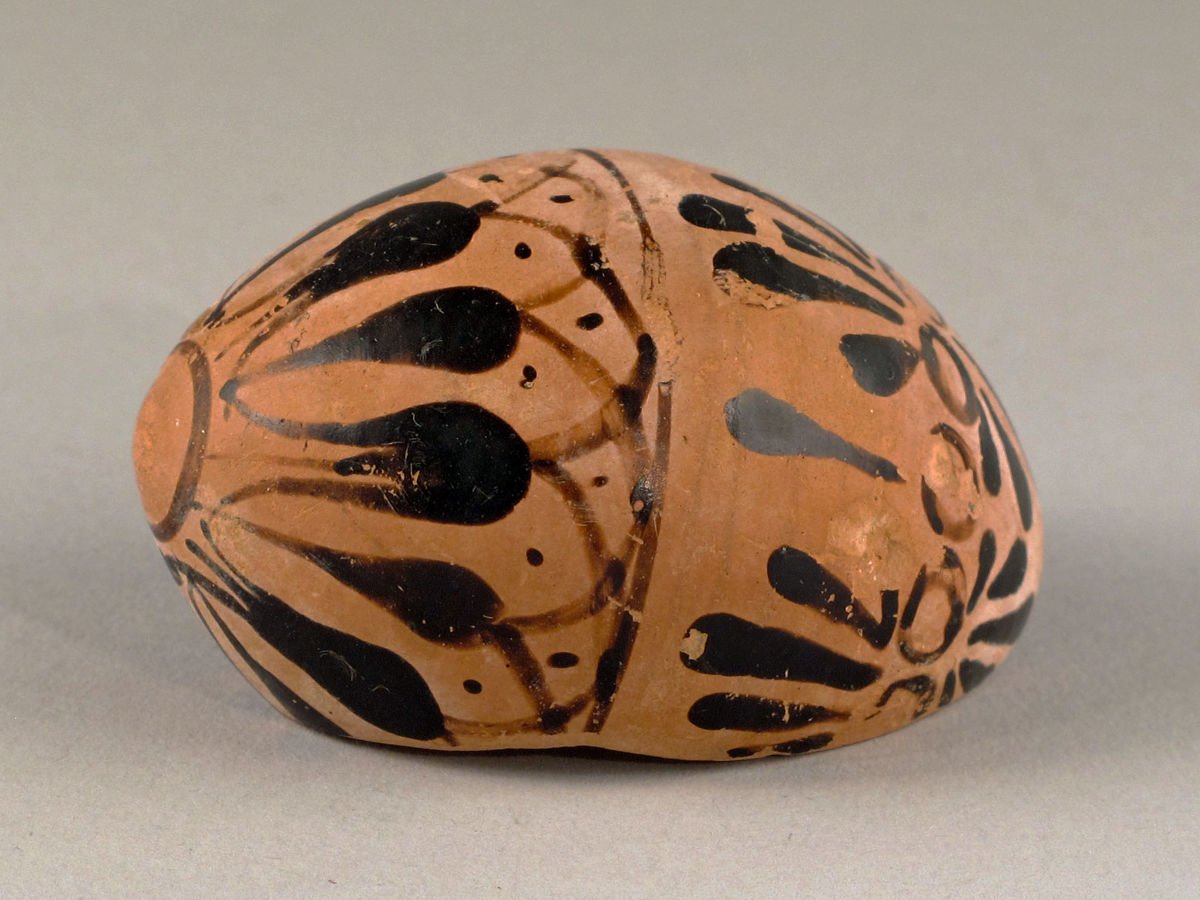 Oon, ca. 500 BC, Metropolitan Museum of Art: New York City[/caption] Orientalizing: The Orientalizing period in Ancient Greek art refers to roughly the 7th century BC (it is a sub-style, following Geometric and before Archaic). It is referred to as such because of the heavy influence from civilizations in the Near East and Egypt. Andrew Clark et al states that during this time, the Greeks adopted the Phonician alphabet for their own decorative uses. The introduction of new symbols, animals, and Near East motifs broadened Ancient Greek artistic vocabulary. Ornament: Ornament refers to any of the linear patterns or floral designs that decorate vases or the scenes on the sides of the vase. Examples include palmettes, meander, rays, rosettes, a net, or ivy, among others. The piece depicted below showcases several ornaments on its surface. [caption id="attachment_16856" align="aligncenter" width="580"] 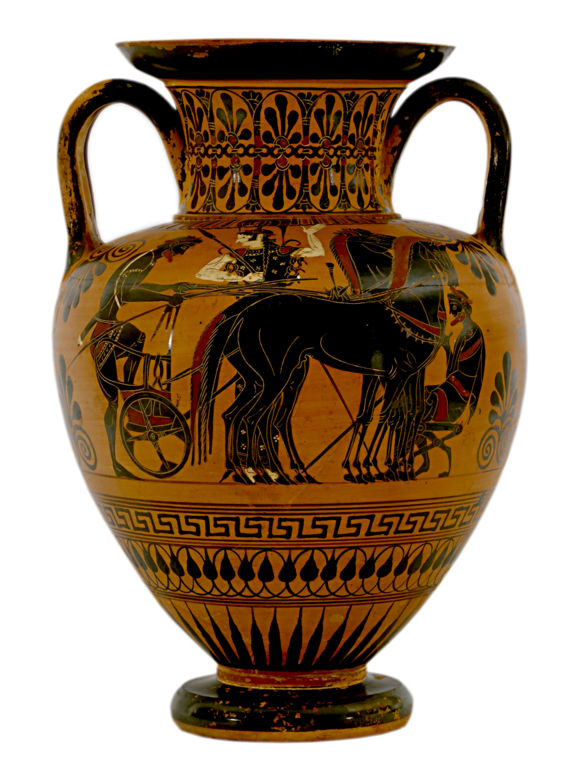 Psykter: This piece of Ancient Greek pottery was a mushroom-shaped vase used for the cooling of wine. There were no handles or a lid. There are several hybrids of this type of vase; likewise, it is possible that the name psykter was a general term for wine-cooling vessels. [caption id="attachment_16754" align="aligncenter" width="806"] 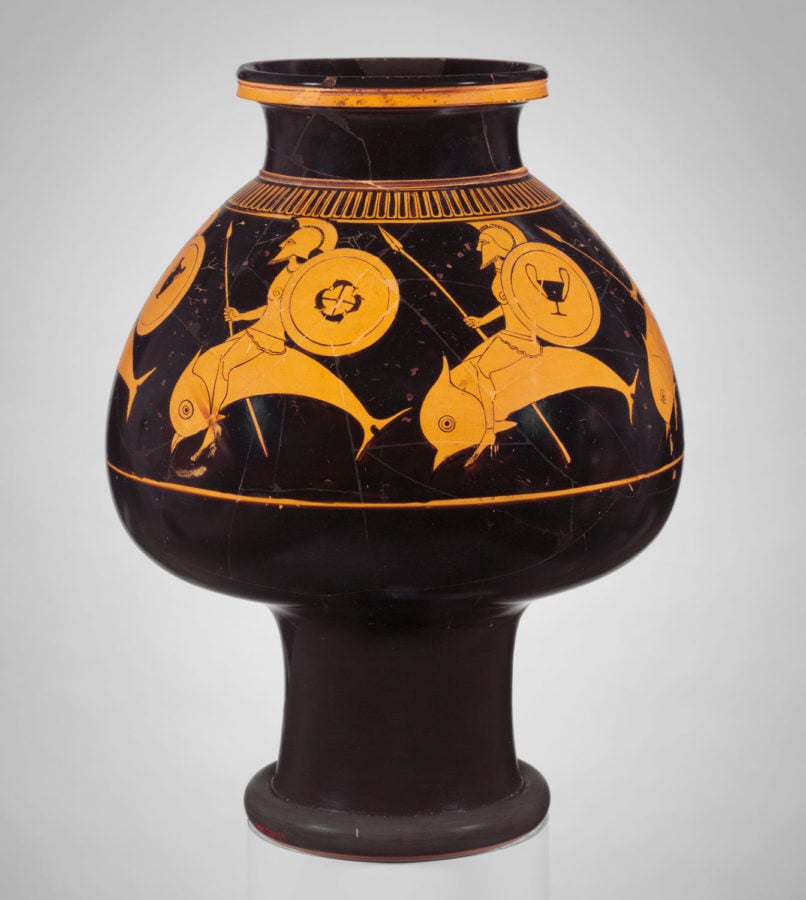 Attributed to Oltos, Terracotts psykter, ca. 520-510 BC, Metropolitan Museum of Art: New York City[/caption] Pyxis: A pyxis is a small cylindrical box. It had many uses ranging from containers for incense, jewelry, or ancient cosmetics. Feminine scenes were generally painted on the sides of the vase. [caption id="attachment_16751" align="aligncenter" width="720"] 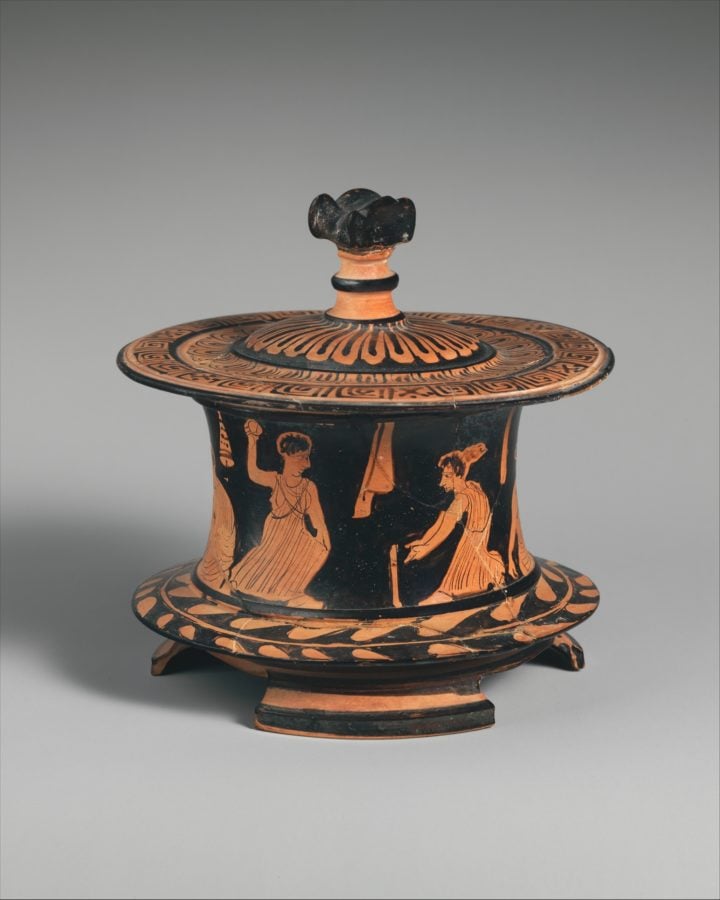 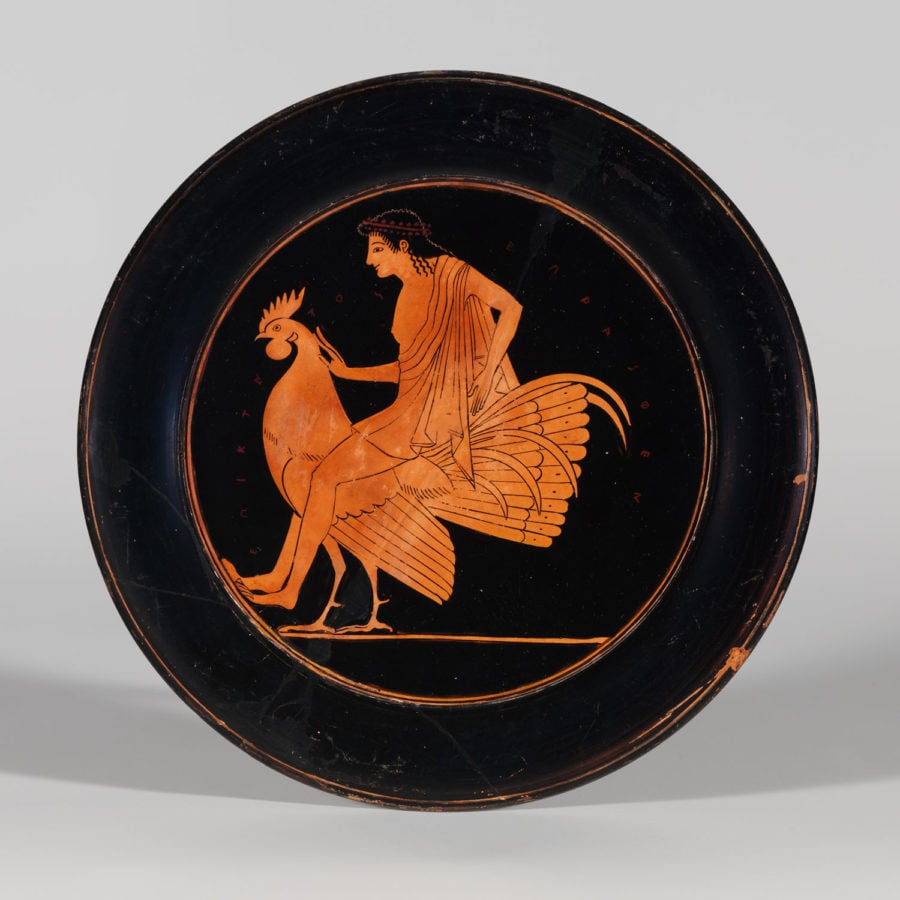 Signed by Epiktetos as painter, terracotta plate, ca. 520-510 BC, Metropolitan Museum of Art: New York City[/caption] Rhyton: Used a vase for drinking, the rhyton is a uniquely shaped vase. With one handle, this vase came in different shapes and sizes. There are examples of rhyton shaped as a bird, boar, cow, deer, bull, goat, pig, ram, and even a sphinx. The one below appears to be a fox. [caption id="attachment_16757" align="aligncenter" width="675"] 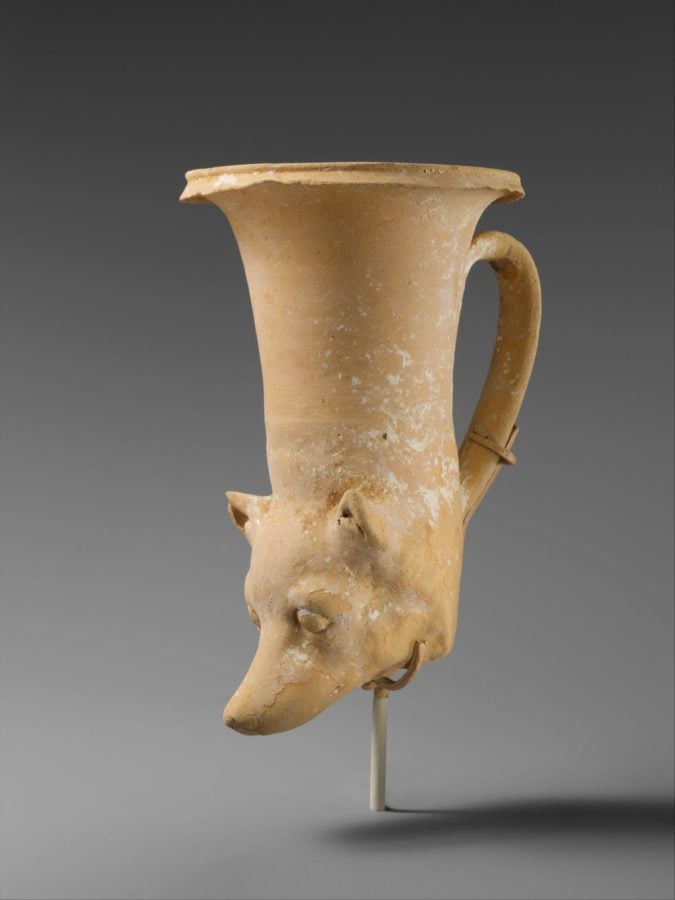 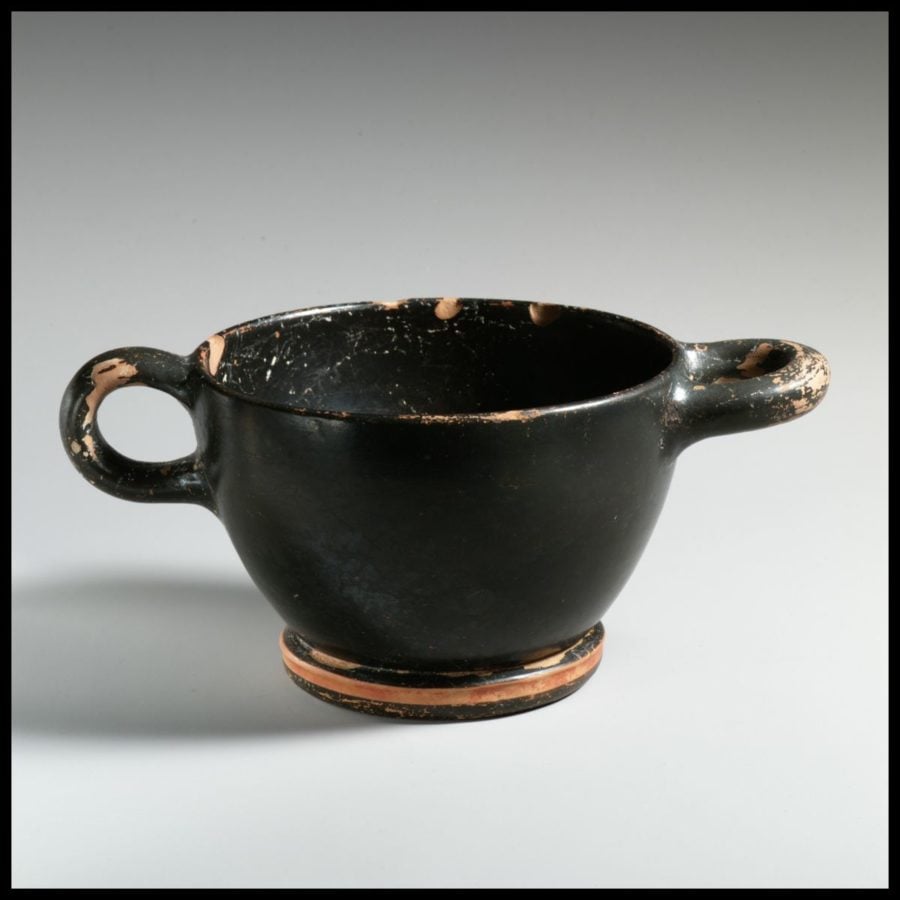 Terracotta skyphos, ca. 460-450 BC, Metropolitan Museum of Art: New York City[/caption] Stamnos: This broad-shouldered vase has a low foot and a low neck. Researchers do not know entirely whether these vessels were used solely for storage, as some examples were found with lids. The Classical Art Research Centre at the University of Oxford states that it also could have been used for the serving of liquids. [caption id="attachment_16819" align="aligncenter" width="731"] 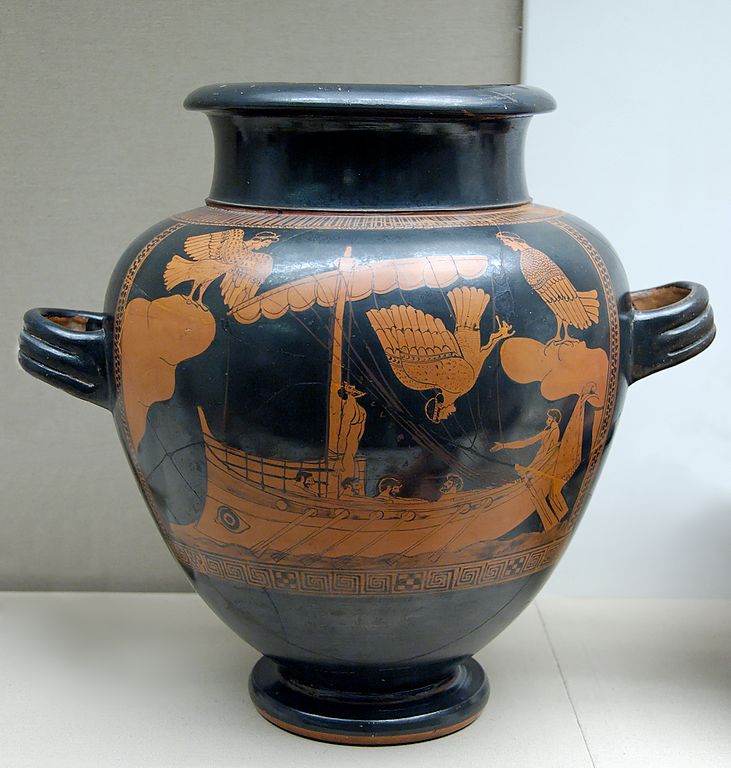 Attributed to the Siren Painter, The Siren Vase (Odysseuus passing the Sirens), ca. 480-470 BC, The British Museum: London[/caption]

Tondo: The tondo is the circular decorated portion inside the cup, at the bottom. [caption id="attachment_16820" align="aligncenter" width="776"] 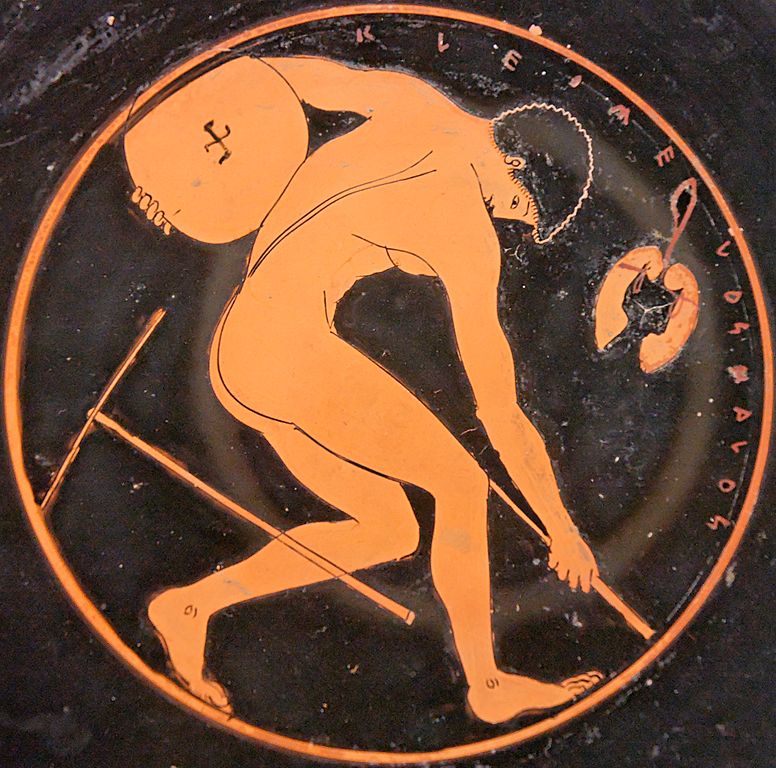 Kleomelos Painter, Young boy holding a discus at the palaestra. Near him, a pick to prepare the landing ground for the long jump, and a pair of dumbbells used to maintain balance during the jump. Interior of an Attic red-figure kylix, ca. 510-500 BC, The Louvre Museum: Paris[/caption]

White-Ground: White-ground technique is an Ancient Greek style of pottery which shows the scenes, or figures, on a white background. More fragile than red-figure or black-figure, white-ground still maintained popularity throughout Attica. [caption id="attachment_16821" align="aligncenter" width="576"] 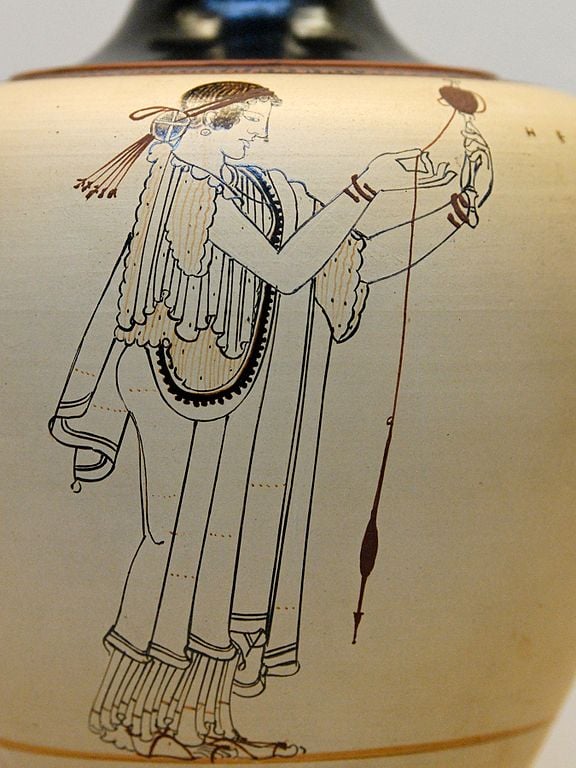 Literally speaking, mythology is an old-school kind of storytelling. “Mythos” is a Greek word for “story” while “logia” has the [...]

On the Texas-Mexico border, there are treasures of prehistoric art: hundreds of painted caves and rock shelters dating as early as 2000 BCE. Filled [...]