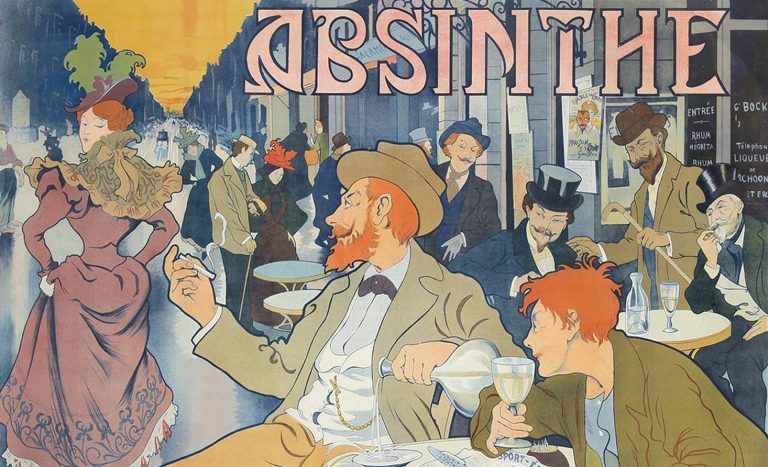 Since becoming popular in late 19th century France, in the era of Art Nouveau, absinthe has always had a certain mystique. Derived mostly from the leaves of Artemisia absinthium (wormwood), absinthe became known as la fée verte (“the green fairy”), due to its frequent green coloration. From the outset, the fiery spirit divided opinion: it was loved by bohemians like Baudelaire, Picasso and Joyce, but loathed by temperance campaigners who feared its corrupting influence and wanted to ban it from public sale. See some of the art made under the influence or inspired by absinth!

Édouard Manet’s The Absinthe Drinker is a moody evocation of urban low-life. Manet based the portrait on an alcoholic vagrant he knew called Collardet, who hung around the Louvre area of Paris. Manet’s picture has a brutal frankness and an air of solitary desperation.

Unsurprisingly, advertisements for absinthe presented a rather different image. Poster artists like Henri Privat-Livemont and Leonetto Cappiello promoted a joyous and sociable vision of absinthe consumption. In keeping with the times, they used classic elements of Art Nouveau style – flowing organic forms, areas of plain color and elegant typography – to create striking and effective advertisements.

In Privat-Livemont’s 1896 poster for Absinthe Robette, absinthe is depicted as a health-giving elixir, brandished by a beautiful, barely clad woman who resembles a figure from mythology.

To maximize sales, distillers were keen to promote absinthe as a sociable drink that men and women could enjoy together. Absinthe was enjoyed by all social classes from the working class to the wealthy bourgeoisie.

Absinthe became so popular in bars, bistros and cafés that, by the 1860s, the hour between 5-6 pm was called l’heure verte (“the green hour”). By 1910, the French were drinking 36 million liters of absinthe per year. However, absinthe was increasingly tainted by assertions that it was addictive, hallucinogenic and responsible for criminal disorder. By 1915, absinthe had been banned in most of Europe and in the United States.

In recent years, absinthe has seen a worldwide revival in popularity, with growth in artisanal production and a variety of new formulations. In 2011 the French government finally repealed its 1915 absinthe ban.