Painting of the Week: Firs Zhuravlev, A Fashionista Wife 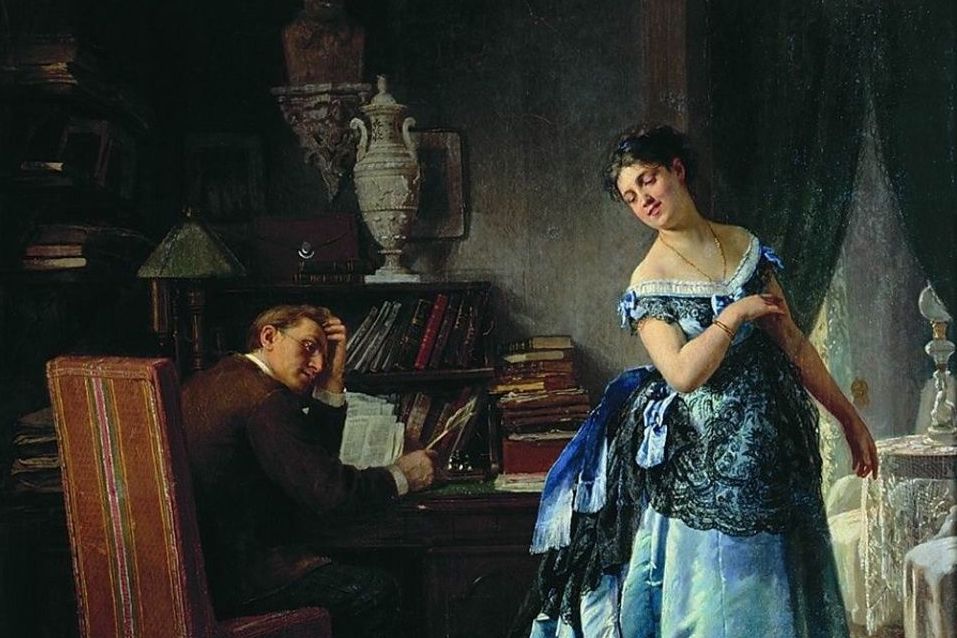 Firs Zhuravlev’s realistic paintings show all aspects of Russian life. And we can imagine the scene from the picture A Fashionista Wife in the house next to us both in the 19th century and now!

“A gifted painter – writes with all the truth…”

Firs Zhuravlev (1836-1901) was from a middle class family of well-known tailors in Saratov, Russia. Certainly, his parents treated all Firs’ hobbies, including drawing, extremely negatively, considering it a waste of time. But the future painter could not let go of his talent. So, in 1855, Firs Zhuravlev entered the Imperial Academy of Arts, in the class of historical painting.

The main themes of Zhuravlev’s paintings were the poor and unsettled lives of creative people, unequal marriage, the fate of widows and orphans, and merchant life. So, real life was always depicted with its troubles and joys, hopes and disappointments. The female theme also occupies an important place in Zhuravlev’s work. Moreover, Zhuravlev was one of the first painters in the history of Russian art to show a naked female body in his work.

Getting ready for a ball with Firs Zhuravlev is fun!

The painting A Fashionista Wife is a genre scene. Apparently, the woman is getting ready for a ball. However, her natural desire to look attractive is not making her husband very happy! Meanwhile, astonished by her beauty himself, he prudently fears the appearance of potential admirers. That is to say, the artist managed to brilliantly convey the husband’s dejected state.

How flirtatiously she is demonstrating her outfit! The fashionista is not at all afraid of her husband’s attitude. You go, girl!

This is historically accurate: in Russia, many men found themselves in a similar position in the second half of the 19th century. To sum up: men had only duties. One of the main duties was to provide for their beautiful wife. It did not matter how much time, energy, and strength a man needed for this, especially if his wife was a fashionista!

There is another interpretation of the painting, which sets new accents in the problem of unequal marriage. We see a man of intellectual labor. In his room there is a bust of Russian literary critic Vissarion Belinsky, a symbol of democratic views. However, his wife is only ready to turn around in front of a mirror all day, trying on a new expensive outfit.

Which explanation of A Fashionista Wife do you prefer when you look at the painting? Let us know!

Firs Zhuravlev was a major phenomenon in Russian painting. His paintings are scattered in museums in many cities of Russia and neighboring countries, his murals adorn the walls of Orthodox churches. But, unfortunately, now the artist’s name is known only to a narrow circle of specialists. So, do your research and you will be charmed away with his paintings too!

Read more on Russian art of the 19th century:

If you find any joy and inspiration in our stories, PLEASE SUPPORT
DailyArt Magazine with modest donation. We love art history and we want to keep going with writing about it.
$5 $10 $25 $50 $100 MONTHLY
Related Topics:19th century, Domestic, Fashion, featured, firs zhuravlev, painting of the week, realism, Russia, russian art