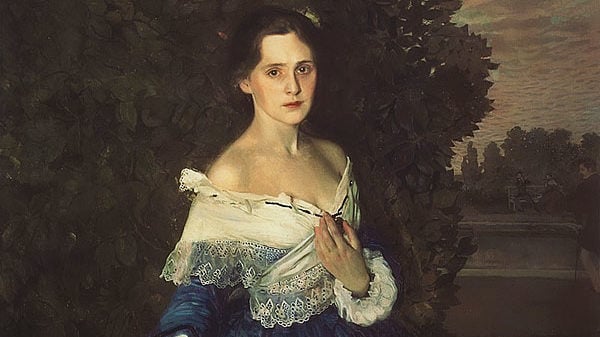 Can you name some female artists, and from Russia in particular? It’s difficult even for those who are really into art. This article tells the story of one of four women who entered the Imperial Academy of Arts in St. Petersburg at the end of the 19th century: Yelizaveta Martynova.

Yelizaveta Martynova was born in 1868, St. Petersburg. From her early childhood she dreamed of becoming a famous female painter at all costs. However, fate had other plans for her. The canvas, Lady in Blue, by Konstantin Somov (1869-1939) depicts the romantic and tender sadness of Martynova’s countenance.

Unfortunately there are no artworks that can absolutely be attributed to Yelizaveta Martynova. Nonetheless, she is known as the first female painter to graduate from the Imperial Academy of Arts in St. Petersburg with teaching rights. This young and energetic girl entered the circle of brilliant Russian painters who encouraged the success of female artists, including Yelizaveta. Sadly her high hopes were destroyed by the most romantic disease of 19th century – tuberculosis.

Art is the only aspiration, but even in front of it I give up and feel myself weak, and here new sufferings begin…

At first nobody noticed changes in Lisa. She was a cheerful and amiable beauty. Only her intimate friend, the outstanding Russian painter Konstantin Somov, could see the pain she concealed from others’ sight. During 1897-1900 he had been painting the picture, Lady in Blue. This portrait is an implicit symbol of the Russian Belle Epoque. Pre-Raphaelite in style, fierce, deathly pale skin, and sad gleaming eyes inspired her contemporaries to proclaim Yelizaveta Martynova as a “Modern Mona Lisa”. Somov clothed his model in old-fashioned dress. Her delicate and trembling figure stands in solitude in a park, touchingly looking at spectators with a face full of sorrow.

Martynova’s friends disapproved of the portrait. It was such an unusual role for their dear Lizzy. For instance, read following quote from Margarita Yamschikova, Yelizaveta’s close friend and also contemporary female artist.

What has the painter done with this face, these cheerfully shining eyes? How could he pull this deeply hidden pain out, this sadness and grief of unhappiness? How could he depict this tender and painful look of lips and eyes?

From memoirs of Margarita Yamschikova

Somov unveiled Lady in Blue in 1900 at the exhibition Mir Iskusstva (World of Art) for the first time. The canvas was such an enormous success that the administration of the State Tretyakov Gallery intended to buy it. As he was in need of money, Somov accepted the proposal. Elisa, however, strictly disagreed.

I was posing for you, for pure art, and not for you to receive money for the sadness in my eyes, for my soul and suffering … I do not want this!

From the letter to Konstantin Somov, 1903

Despite her objections Somov sold the portrait. Obviously Yelizaveta felt something more than just friendship with Konstantin. She could not get his love back however, because of Somov’s homosexuality. Nonetheless, some historians believe that Somov felt affection towards her. Anyway, there are other portraits of Yelizaveta made by other Russian painters like Malyavin (1869-1940), Bakst (1866-1924) and Braz (1873-1936). Her’s was a tragic story of a female Russian artist who died in 1904. Her dreams were of nothing but a glorious career as a painter. Instead Yelizaveta Martynova stays in our memory as exquisite Mona Lisa of the Belle Epoque.