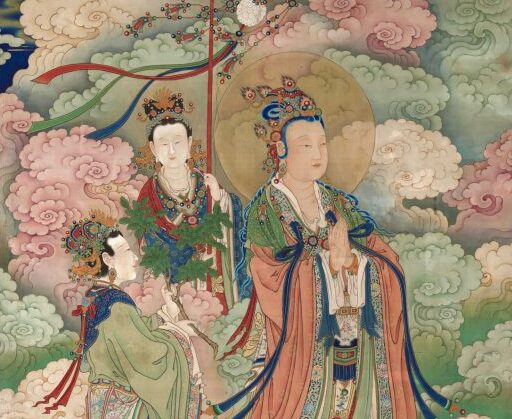 Journey to the East – Buddhist Art Across Cultures

Imperial Chinese art has a long history stretching through many dynasties and many centuries. Many social, political, and economic factors have caused Chinese art to evolve and change over the millennia. However, one of the strongest factors with few exceptions was the ruling Emperor or Empress of China. He or she traditionally set the fashion on what was officially appreciated, promoted, and collected. One of the most splendid and prosperous periods in imperial Chinese art was during the 61-year reign of Emperor Qianlong (r. 1735-1796) of the Qing dynasty. His rule marked a highpoint in artistic quality and quantity. Venerable Celestial Bodhiruma is one such example. This painted hanging scroll is a masterpiece of mid 18th century Chinese art from the Virginia Museum of Fine Arts collection.

Emperor Qianlong had one of the longest reigns in the history of China and of the world. His throne name “Qianlong” means “Strong and Prosperous,” and he certainly lived to his expectations. Under Qianlong, China reached its largest geographical borders with a rapidly growing population and a large and stable economy. He was a good administrator, which allowed a substantial and sustainable patronage of the arts. Venerable Celestial Bodhiruma is one such output. Qianlong officially sponsored Chinese literature, architecture, painting, porcelain, and jade and ivory carvings. He personally practiced prose, painting, poetry, and calligraphy. Emperor Qianlong could be described as an enlightened ruler because his reign was a time of splendor and prosperity for China.

Venerable Celestial Bodhiruma was created around 1740, in the early part of Qianlong’s extensive reign. It depicts the Goddess Bodhiruma with two attendants. Bodhiruma is a Buddhist deity, named after the bodhi tree under which the Buddha achieved enlightenment. To further emphasize this spiritual connection, one of Bodhiruma’s attendants holds a leafy branch of the bodhi tree. Bodhiruma and her attendants appear in an otherworldly landscape, shrouded by clouds of pink, cream, and mint hues. These vibrant shades echo in the figures’ elegant and elaborate attire. The goddess walks toward the scroll’s right as her two attendants follow behind.

All appear calm and serene, especially the goddess, as her hands are held in a prayer-like gesture. There is an inner glow of peace radiating from their tranquil smiles. Their silks and ribbons sway and flutter about them as if lightly blown by a gentle wind. The fabrics drape delicately and hang softly as if earthly forces like gravity do not affect these heavenly beings. We only get a glimpse of the earthly realm through the pockets of blue sky between the parting clouds. Otherwise, both time and place are eternal in Venerable Celestial Bodhiruma.

Venerable Celestial Bodhiruma is a Buddhist work of art, and it has strong stylistic influences from Tibet as seen in the swirling clouds and heavy black line contours. The Qing dynasty adopted and supported Tibetan Buddhism while still holding strong onto its reverence of ancestors. Because of the Qing cultural and religious ties to Tibet, a blended Sino-Tibetan style emerged in Chinese Buddhist art. The two countries were so closely linked that in 1751, only a decade after Venerable Celestial Bodhiruma was painted, Tibet officially became a protectorate of China under Emperor Qianlong. However, we should not assume that Venerable Celestial Bodhiruma and other Buddhist works during Qianlong’s reign are simply the blending of Tibetan and Chinese influences because European forces are at work too.

Emperor Qianlong admired European painters at his court such as Giuseppe Castiglione and Jean-Denis Attiret. Both men were Jesuit painters and missionaries. Castiglione originated from Italy and Attiret came from France. These two men, and other Europeans at Qianlong’s court, introduced European ideas on shading and perspective. They influenced local artists such as the unknown artist who produced Venerable Celestial Bodhiruma. There are subtle shading and linear perspective found in the painting. The shading is most easily seen in the fabric folds of the figures’ sleeves, and the perspective is implied by the rear attendant being smaller in size than the attendant in the foreground. The rear attendant is also raised higher implying she is father away as the ground plane tilts up moving toward an unseen horizon.

Venerable Celestial Bodhiruma is a large piece to view. Its dimensions are 2.65 m x 1.17 m (8’ 9” x 3’ 10” ). It easily towers over anyone admiring it. What is even more impressive is that Venerable Celestial Bodhiruma would not necessarily have been a stationary piece in its original context. It may have been carried at some point during an important Chinese Buddhist ritual known as the Liberation Rite of Water and Land. The ceremony involved the presentation of devotional paintings of gods, goddesses, and demons to allow salvation to lower, less enlightened beings.

Like a Russian icon used in an Orthodox church procession, Venerable Celestial Bodhiruma may have been used in a Buddhist temple procession. The intense colors, bold lines, and oversize dimensions would have made Venerable Celestial Bodhiruma easily viewable, understandable, and revered. Imagine how the gentle sway of the carried painting along the procession would have made its colored ink and gold threads shimmer in the sunlight.

Emperor Qianlong did not commission Venerable Celestial Bodhiruma. Our clue to its provenance is the calligraphic inscription at the lower right corner stating it was commissioned by the Imperial Prince. There were many imperial princes at the Qing court under Emperor Qianlong, but art historians attribute the commission to Prince Yunlu (1695–1767) due to the painting’s style, quality, and size. Prince Yunlu was known as an arts patron as well as a court official overseeing the royal household’s music, rituals, and publications.