Masterpiece Story: Travelers Among Mountains and Streams by Fan Kuan 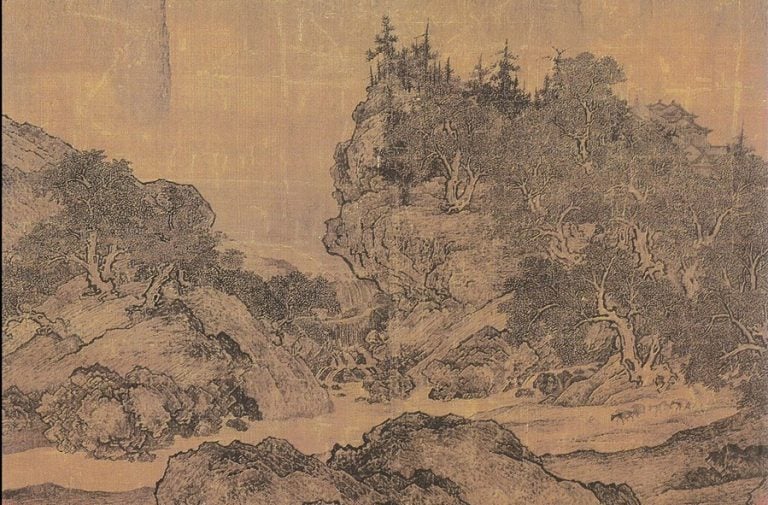 The Song Dynasty ruled China for over three centuries from 960 to 1279. During this time, Song China was the most technologically advanced society in the world. They invented the magnetic compass, movable type printing, paper money, and gunpowder. Song China also produced some of the most skilled landscape painters, such as Fan Kuan. He stands at the apogee of Chinese landscape painting. He captures the effects of atmosphere, weather, and seasons on natural scenery through his landscape paintings. Travelers Among Mountains and Streams is his most famous work and is considered his life’s masterpiece. It presents the solemn grandeur of a majestic landscape.

Fan Kuan lived during Song China as a Daoist recluse away from the cosmopolitan centers. Therefore, unlike most of his contemporaries, he was not attached to the Song imperial court in the capital city of Bianliang. Kuan shunned city living, sequestered himself on Mount Hua, and observed nature in isolation. Hen also rejected outside artistic influences and believed that nature was the ultimate teacher in how to paint. Travelers Among Mountains and Streams captures Kuan’s reclusive attitudes as well as his rejection of courtly life.

Travelers Among Mountains and Streams is a massive painting at 206.3 cm long by 103.3 cm wide (81.2 x 40.7 inches). It towers over most visitors while capturing the grandeur of rising mountains in a dramatic vertical landscape. Fan Kuan is credited as the first Chinese artist to capture naturalism in his works. Furthermore, Travelers Among Mountains and Streams uses light, shade, distance, and texture to convey the complex landscape to the viewer.

Travelers Among Mountains and Streams has a plethora of details easily overlooked by viewers due to their small and intricate size. For example, in the bottom right corner, there is a mule caravan led by two herders. The two figures and their four animals are barely discernible in the large landscape. However, their tiny presence gives a sense of scale to the powerfully large size of the natural world surrounding them. The rocks and boulders in the foreground, therefore, are not pebbles but substantial hills. The vegetation framing the mule caravan are not mere bushes but mature trees.

The caravan’s diminutive size thus highlights the insignificance of the human presence in Travelers Among Mountains and Streams. Nature is the dominant force in the painting, and it is further emphasized by the miniature size of the architecture. Several buildings are located midway up the composition near the right border. They barely peak over the surrounding forests and silhouette against the base of the mountain. They have a dollhouse-like appearance with the caravan as its similar-scaled dolls.

The large volume of nature is captured in the long vertical format of Travelers Among Mountains and Streams. In order to display the essential elements of the scene, Fan Kuan used multiple perspectives throughout the painting. The foreground has a ground-level view. It presents a great boulder anchoring the bottom edge of the landscape. The mid-ground depicts an eye-level view. It presents a forest, architecture, and water eddies filling the middle section of the scene. Finally, the background has an oblique view. The top of the cliffs are visible with shrubbery clinging to their rocky ledges.

Physically such details could not all be captured in the same single-point perspective. However, Fan Kuan used a shifting perspective with expert handling. This kind of perspective leads viewers on a journey through the landscape from the boulder, past the mule caravan, skimming the forest and buildings, up the cliff walls, and finally to the misty summit.

Travelers Among Mountains and Streams is a visual story for the eyes. It uses intricate details, textured strokes, and raindrop strokes to convey the big picture with emotional sensitivity. These strokes provide tactile realism to surfaces. For example, the crevice on the right side of the painting and the textured strokes create the ridges and shadows surrounding the slender silk-string cascade. Raindrop strokes are seen on the face of the cliffs. They blur the cliff’s details, almost as mist suspended in the air. They also add moisture to the landscape. Travelers Among Mountains and Streams is a painting full of flowing water, rising mists, and floating clouds. Water is a vital element to the scenery, and therefore is as tangible as the rocks and trees it flows over and around.

Over one-thousand years after its creation, Travelers Among Mountains and Streams is still revered as one of the greatest examples of Chinese landscape painting. We wonder what the reclusive Daoist Fan Kuan would have thought if he knew that his paintings would be studied and admired by the same institutions he disliked?

It is ironic that while Fan Kuan avoided structured society, it is a structured society that has established and maintained his posthumous reputation as one of the greatest Chinese painters. Proud owners of the Travelers even stamped their seals in red ink on the painting’s borders showing their appreciation. It also allows modern scholars to know the painting’s provenance or history of ownership.

Regardless of what Fan Kuan would have felt about his masterpiece hanging in an imperial palace, modern viewers appreciate Travelers Among Mountains and Stream for its grandeur, naturalism, and emotional sensitivity. Fan Kuan should receive more recognition than just a leading Chinese landscape painter. He captured questions and feelings that are universal: where does mankind belong in the world? Are we too conceited in our importance? How are we impacting the natural world? I have loved this painting ever since I discovered it in 2009, during my first college-based art history course. It has been a 12-year love affair, and I hope you allow Travelers Among Mountains and Streams to enter your heart as it has entered mine.