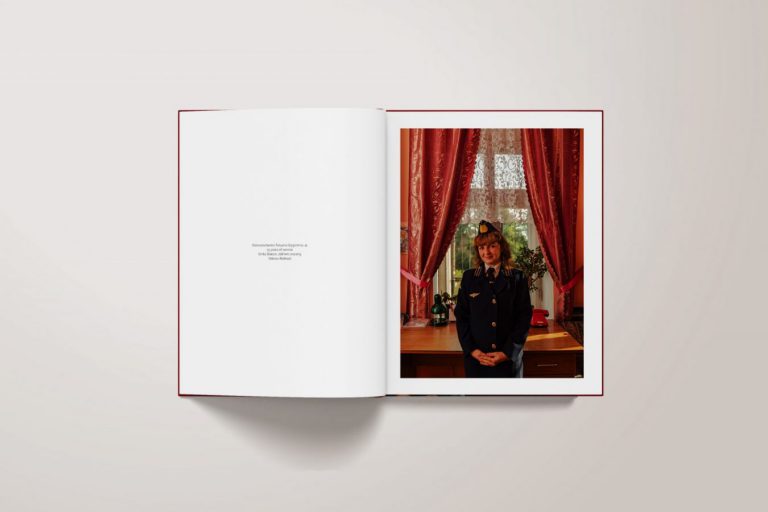 Every once in a while there appears a piece of news describing a quirky, unknown, or forgotten occupation. Sometimes it’s the lightkeepers in a historical lighthouse, while other times it is whale watchers or remote house guardians. But many of those people work a lot closer to us than we think. Sasha Maslov decided to explore and document the vanishing world of railway level crossing controllers in Ukraine. His photography project has been published as a book by Osnovy. Join us and get to know the Ukrainian Railroad Ladies.

Being the traffic controller is a job which carries responsibility for the safety and lives of people. In many countries, it has been eradicated by automation. Thanks to Maslov’s project, we can still explore the unique world of Ukrainian Railroad Ladies. Maslov’s work joins and builds on the long tradition of portraying people in their place of work or with attributes of their occupation. In painting usually, the focus has been on the higher classes or painters themselves. However, an odd tailor also found his place in history. In photography, this trend is even more frequent, often setting the people and their work in a broader sociological context.

Ukrainian-American Sasha Maslov is a portrait photographer and storyteller based in New York City. He became known for his social documentary projects, especially around Eastern Europe. When he moved to New York in 2008, he pursued a career as a portrait photographer. In this book, he draws on his experience in both of those areas. Maslov explores the social context of the work of traffic controllers. He also imbues them with individuality, especially when he comes closer to his subjects.

Before it became a book, Maslov’s project was recognized at the LensCulture Exposure Awards 2020. The series was recognized as a Juror Pick, both for its formal executions, as well as the personal approach, allowing us to enter the world we could not otherwise explore.

The Ukrainian Railways, Ukrzaliznytsia, is a company with traditions dating back to the Soviet era. The company was a monopoly. It granted its employees special privileges, such as dedicated medical care. After the fall of communism, changes came very slowly. The mammoth company, which even today remains Ukraine’s largest employer, was slow to evolve and adapt to the modern world. So as the automated signals and traffic controls are deployed, they still maintain the network of the traffic controllers. The reason for it is the adventurous behavior of people using the level crossings, who habitually ignore the automated signs, or try to go under or around closed barriers. Having the added human touch helps to nudge people towards safety. Especially in smaller communities where often the traffic controller knows every single person crossing the track.

The controllers spend their 12-hour shifts in small signal boxes. This is where they observe and manage the traffic. 80% of traffic controllers are women. Some of them have been working there throughout their career, while others have moved into the role as they neared retirement. As much as the signal boxes are the property of the railway company, their interiors, and space around them are marked by their users. The traffic controllers make the space they work in their own. They bring flowers, paint the walls, hang curtains, or tend small gardens around it.

At times it feels like they are stoically going against the tide of modernity. Their work will eventually vanish and yet they persevere and fulfill their duty, even in the face of war. In 2014, when the hostilities started in eastern Ukraine, the rail traffic was redirected, but the signal boxes remained manned (or womanned) to keep the infrastructure safe.

Maslov’s photos capture all the various aspects of this work. We see the wild variety of the signal boxes interiors, with the traffic controllers in them. tThey become extensions of their personality. The interiors wrap themselves around the person working in them, like a cosy blanket. But we also see the stoicism and pride in the work, with many controllers posing in their full uniforms.

The photos vary between close and middle distance and some are taken from farther away, all putting the people in the context, but with varying focus. The distance ones turn the women almost into a type, figure, or symbol, as they lose their distinctive features. But as soon as we get closer to them, they are brimming with life. You feel each of them has so many stories to tell, and it would be so lovely to have a cup of tea with them in the signal box.

In some of the photos, Maslov uses the signal box form to create an almost abstract background. He also consciously uses color to draw us in and to help tell the story.

The book is constructed in a way where the photos tell us all of the story. We only get a short preface by Halyna Gleba and then each photo is accompanied by a very sparse caption, giving us the controller’s name, age, and time in service, and the part of the line they are responsible for. That’s all we are explicitly told about them, the rest is in the photos.

The book is beautifully published and Maslov’s concept works are perfect for most of the time. A photography book is a very tricky medium; it requires a much larger body of work than a competition series or a reportage. This makes it difficult to maintain the equal level of the works, so we have here many exquisite photos and some that while they are good, are not perfect.

The way we interact with the book also matters. I find this one is best taken in smaller doses, as if you see it all in one go a sense of repetition comes. But take it in smaller chunks and there are many treasures to find. We need to give each of the photos our time and attention to fully digest them in their own right and as a group. And the Ukrainian Railroad Ladies do deserve our full attention. It is a great book about a fascinating and vanishing part of the world that we tend to overlook.