Thomas Becket: The Imagery of an Unexpected Saint 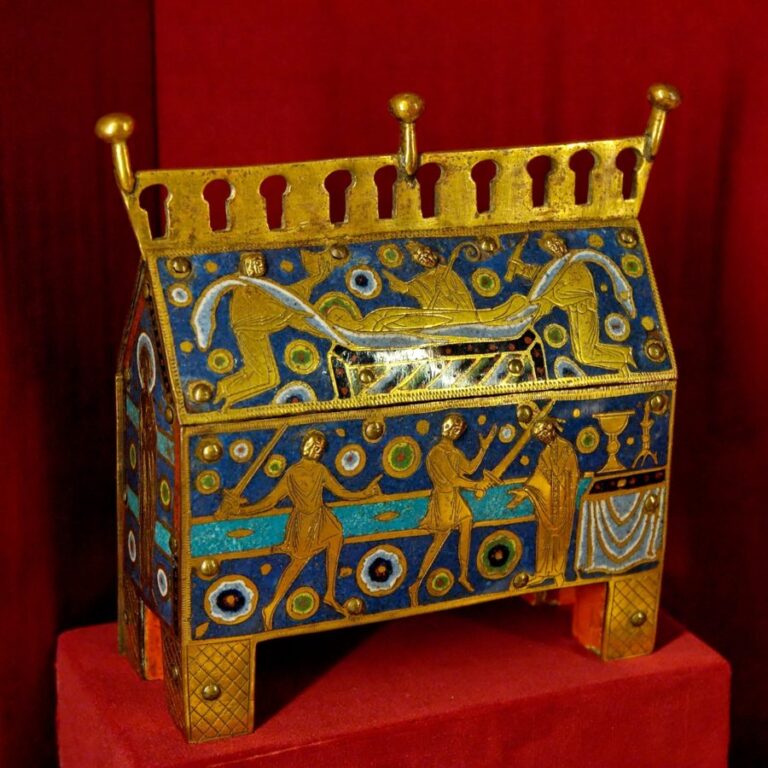 A controversial figure, no one among his contemporaries would ever have assumed that Thomas Becket, adviser to King Henry II, and later Archbishop of Canterbury, was destined for sainthood.

Born into the petty nobility around 1119, Becket received some schooling, including training in canon law. He came to the notice of King Henry II of England while in the household of Theobald of Bec, Archbishop of Canterbury (r. 1139-1161). Recommended to the post of Chancellor in 1155, Becket became a belated father-figure to the young, impressionable king.

According to John of Salisbury, Archbishop Theobald thrust Becket forward for the position because he could exert a mediating influence on Henry, who had only ascended to the English throne the year before. However, William Fitzstephen describes a much closer relationship between the king and Becket. Recounting a famous incident involving an extravagant cloak, King Henry convinced Becket to give his new garment to a beggar they came upon in the streets of London. Without consulting Becket, the king offered the shivering beggar the cloak, nearly tearing it from the astonished chancellor’s shoulders before Becket wisely gave way to the jest, walking away arm-in-arm with Henry and chuckling all the way back to the palace. The king had every reason to believe that Becket would always support him and his policies, that he would always be a close friend, and that he would consistently place Henry first.

In 1161, Becket’s patron, Archbishop Theobald, died. King Henry could think of no one better suited to take his place on the prelate’s throne than Thomas Becket himself. Hoping to gain firmer control over the foundations and officials of the Catholic Church in England, the king encouraged a council of noblemen and ecclesiastics to approve of Becket’s promotion. Eager to please the king, the chancellor was confirmed in his new position. Thomas Becket was consecrated Archbishop of Canterbury on 3rd June, 1162. Henry’s hopes were naturally high. They had worked so well together in the past and Becket had always given way to the king’s will. What could possibly go wrong?

Many contemporaries commented on the miraculous change the appointment affected in the once-worldly Thomas Becket. Becket, known for his lavish lifestyle and generous table filled with the best of dishes quite suddenly “put on the hair shirt and the monk, crucifying his flesh along with his vices and concupiscences,” according to John of Salisbury. Worst of all, he refused to support the Constitutions of Clarendon, King Henry’s program for the church in his realm. Convicted by a great council of contempt of royal authority, Becket fled to the Continent in 1164, remaining in exile until 1170.

Thomas Becket returned to England after Pope Alexander III threatened to excommunicate King Henry and put his realm under interdict. Becket was wary, but he sailed home and was coldly received by his old friend and his court. Tempers flared again almost immediately; earlier in the year, King Henry had persuaded the Archbishop of York to crown his heir, Henry the Young King, a privilege traditionally enjoyed by the See of Canterbury.

Becket excommunicated the offending archbishop, and King Henry was beside himself. Declaring his frustration aloud before members of his court he cried out, “Will no one rid me of this turbulent priest?” Four of King Henry’s knights were eager to oblige their lord – too eager perhaps. They rode to Canterbury and, before entering the cathedral, they left their armor and weapons outside under a nearby tree. Rushing into the church, they demanded that Becket submit to the king’s will. Ever resolute, the steadfast archbishop refused. Retrieving their swords, the knights caught Becket on his way to vespers, the evening prayer service, on the stairs leading to the cathedral quire.

According to Edward Grim, a visiting clerk injured in the altercation, one knight struck off the crown of his head, followed quickly by a second blow. Becket stood immovable and declared his willingness to die in the service of God. The third strike was the death blow, cracking open his skull and knocking him to the ground. The fourth knight, his boot on the archbishop’s neck, dashed out Becket’s exposed brains on the pavement before the four men disappeared into the night.

Almost immediately, all fingers were pointed at King Henry. He loudly denied that he ever ordered the death of the archbishop, but few believed the now-humbled monarch. The monks of Christ Church in Canterbury buried their tragic father. Meanwhile word began to spread of miracles attributed to Becket’s intercession. Many proclaimed that Becket was not only a saint, but a contemporary martyr. Within three years of his death he was canonized by Pope Alexander, and King Henry had to come to terms with the consequences. In 1174, King Henry lay prostrate in Canterbury Cathedral, performing very public, and very painful, penance for Becket’s death. Becket’s assassins were not condemned by King Henry, but they were excommunicated by the Pope. Later they made a pilgrimage to Rome in an attempt to seek celestial forgiveness.

Becket’s reputation spread far and wide. Canterbury Cathedral, which soon thereafter succumbed to fire and was rebuilt on a grand scale, became the site of international pilgrimage. Churches were dedicated to him throughout Europe and his story was told over and over again. To this day, the martyrdom of Thomas Becket remains one of the most well-known and consistently retold vignettes of the Middle Ages.

Given Thomas Becket’s growing popularity, it is not surprising to find the saint depicted in a wide variety of medieval art. One of the most common scenes, despite its gruesome nature, is the martyrdom of the saint with particular focus on Becket’s subjection to the sword. However, although the story itself never changed and was extremely well-known, Becket’s martyrdom was rendered in a wide variety of ways, each accessing particular religious symbolism for the benefit of the Christian viewer.

This enameled copper reliquary depicts Thomas Becket’s martyrdom on the front, lower panel. It was made in Limoges, France between 1190 and 1200, and likely it would have originally held relics either of or associated with the subject saint. This piece is currently in the collection of the Musée de Cluny in Paris.

Although Becket was reportedly attacked and killed on the quire stairs, the artist chose instead to highlight the archbishop’s exalted position, celebrating mass before the altar. In addition, the famous “first strike” to the crown of the head has been reinterpreted more ritualistically as an anticipated beheading – a death perhaps more appropriate to Becket’s status as a martyr. Also, observe the hand of God descending from the sky just above the altar. Here Becket’s martyrdom is indicated to be divinely ordained. Becket, with arm outstretched, almost grasps this holy symbol, indicating his willingness to accept his fate. Even the most famous stories were often reinterpreted in medieval art; symbolism often trumped a true retelling of spiritual events.

The attack is more faithfully rendered in this miniature from an English psalter created in c. 1250. Psalters often contained a variety of images intended to focus the attention and spiritual energies of the faithful, and this piece is no exception. Executed on parchment in ink, paint, and gold, this piece is currently in the collection of the Walters Art Museum.

The image captures a particular moment in time, and one of special significance in the story of any Christian martyr: the spilling of blood. All four of the knights involved in Becket’s assassination are depicted here, bearing down on him menacingly. Even Edward Grim, the clerk who was by Becket’s side when he was attacked, is shown with the arm injury he reportedly sustained in the scuffle. Caught seconds before his death, Becket is shown with hands folded in prayer and no sign of resistance. Again, like the reliquary, Becket accepts his fate. However, in this case his status as a holy martyr, blessed by his own bloodshed, is emphasized.

Becket’s popularity continued well after his death. His imagery and history remained omnipresent in the medieval imagination. Yet the imagery did transform even if the story itself did not noticeably change. Master Franke, a Dominican friar who ended his career in St. John’s Priory in Hamburg, was responsible for the creation of a remarkable altarpiece dedicated to St. Thomas of Canterbury around 1426. Possibly influenced by French and/or Netherlandish contemporary style, Master Franke could hardly leave out the scene of Becket’s martyrdom from his masterpiece.

Unlike many previous scenes, the martyr is front-and-center in this image, kneeling on the decorative tile, flanked by his murderers to one side and monks to the other. The knights, depicted as contemporary, fifteenth-century soldiers, have already dealt the crucial blow to the crown of his head. Becket’s sanctified status is clearly symbolized by the prominent halo around his head, which is absent from the earlier images. However, the key difference can be seen in his face. This Thomas Becket wears an expression of dismay, of suffering, and his look implores his murderers to reconsider their mission. Where is the resolute Becket, the man serene in his suffering and accepting his death as God’s will?

Beginning in the 13th century and increasingly popular throughout the late Middle Ages, the theme of Christ’s suffering in medieval art rose to prominence. This theme seeped into all aspects of Christian philosophy and experience, giving rise to what many scholars refer to as “mysticism”. Stoic acceptance of God’s will gave way in religious art to the physical experience of God and the tangible representation of the suffering of Christ and, by extension, his saints. Here, Thomas Becket’s very visual suffering is meant to emphasize his relationship with Christ and, by extension, remind the viewer of Christ’s agonies on the Cross. This piece is part of the collection of the Hamburg Kunsthalle.

There is no question that the murder of Thomas Becket captured the medieval imagination. In death, a rather unremarkable royal official, and later archbishop, became a symbol of the consequences of excesses of royal power and an indictment on the ambitions of King Henry II. In the hands of countless artists commissioned by the church, however, the depiction of Becket’s martyrdom engaged with popular religious symbolism and was ultimately crafted to reflect significant aspects of medieval spirituality. The malleability of the imagery of Thomas Becket ensured that this saint’s story would be told and retold, made and remade, for generations to come.