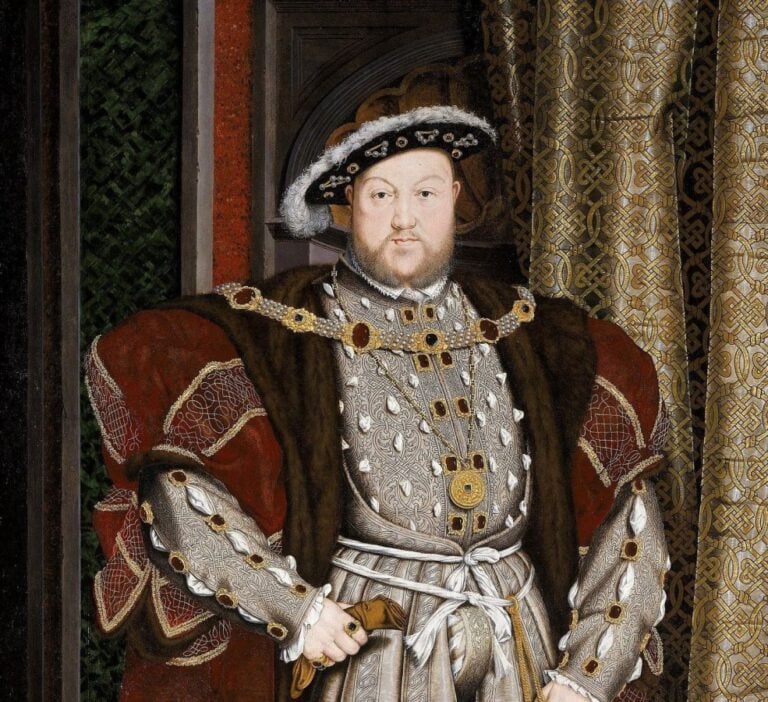 Henry VIII was the King of England who is best known for having six wives and, in particular, killing some of them. He was also famous for doing anything to get what he wanted. His huge wish to annul his first marriage to Catherine of Aragon initiated the English Reformation, which led to separation of the Church of England from papal authority and Henry appointing himself as the Supreme Head of the Church of England. But back to the wives of Henry VIII, here they are in chronological order – and in portraits.

Henry’s first marriage lasted nearly 24 years, while the remaining five totaled less than 10 years combined. Catherine of Aragon was Henry’s first wife. She became pregnant in 1510, just 4 months after their marriage, but the girl was stillborn. Catherine became pregnant again in 1511, and gave birth to a boy, Henry, Duke of Cornwall, who died almost two months later. In 1513, Catherine gave birth to a stillborn boy and next gave birth to a boy who died within hours in 1515. Finally, Catherine bore him a healthy daughter in 1516, Mary. It is said that Henry truly loved Catherine of Aragon, as he himself professed it many times in declarations.

But all good things come to an end. Henry began an affair with Anne Boleyn, who is said to have refused to become his mistress. Despite the Pope’s refusal, Henry separated from Catherine in 1531. In the face of the Pope’s continuing refusal to annul his marriage to Catherine, Henry ordered the highest church official in England, Thomas Cranmer, Archbishop of Canterbury, to convene a court to rule on the status of his marriage to Catherine. On May 23rd, 1533, Cranmer ruled the marriage to Catherine null and void. On May 28th, 1533, he pronounced the King legally married to Anne (with whom Henry had already secretly exchanged wedding vows, probably in late January 1533). This led to the break from the Roman Catholic Church and the later establishment of the Church of England.

Catherine died, banished, at Kimbolton Castle on the 7th of January, 1536.

Henry and Anne married on January 25th, 1533, after a secret marriage on the 14th of November, 1532. On the 7th of September that year, she gave birth to the future Queen, Elizabeth I. Anne subsequently had three miscarriages, and by March 1536, Henry was courting Jane Seymour. In order to marry her, Henry had to find reasons for his marriage with Anne to end.

Henry had Anne investigated for high treason in April 1536. On the 2nd of May, she was arrested and sent to the Tower of London, where she was tried before a jury of peers – which included Henry Percy, her former betrothed, and her own uncle, Thomas Howard – and found guilty on May 15th. She was beheaded four days later.

Jane Seymour was the Queen of England from 1536 to 1537. She succeeded Anne Boleyn as queen consort following the latter’s execution in May 1536. She died of postnatal complications less than two weeks after the birth of her only child, a son who became King Edward VI. Of Henry’s wives, she was the only one to receive a queen’s funeral, and his only consort to be buried beside him in St George’s Chapel at Windsor Castle.

After her death, Henry wore black for the next three months and did not remarry for three years, although marriage negotiations began tentatively soon after the death. Moreover, he put on weight during his long widowerhood, becoming obese and swollen and developing diabetes and gout. Historians have speculated she was Henry’s favorite wife because she gave birth to a male heir. When Henry died in 1547, he was buried beside her, on his request, in the grave he had made for her.

Anne of Cleves was Queen of England from the 6th of January to the 9th of July 1540, as the fourth wife of King Henry VIII. The marriage was declared never consummated and, as a result, she was not crowned queen consort.  Henry confided to Cromwell that he had not consummated the marriage, saying, “I liked her before not well, but now I like her much worse.” He described her as having unpleasant body odor and sagging breasts, among other complaints. Following the annulment, she was given a generous settlement by the King, and thereafter referred to as the King’s Beloved Sister. She outlived the rest of Henry’s wives. Anne died at Chelsea Old Manor on July 16th, 1557, eight weeks before her 42nd birthday. The most likely cause of her death was cancer.

Catherine Howard was Queen of England from 1540 until 1541. She, then 16 or 17, married 49 year old Henry almost immediately after the annulment of his marriage to Anne of Cleves was arranged. Catherine was stripped of her title as queen within 16 months. She was beheaded three months later, on the grounds of treason for committing adultery with male courtier, Thomas Culpeper, while married to Henry. The night before her execution, Catherine is believed to have spent many hours practicing how to lay her head upon the block, which had been brought to her at her request. According to the tale, her final words were, “I die a Queen, but I would rather have died the wife of Culpeper”, but no witness claimed it.

It is often noted that Catherine Parr “survived” Henry. In fact, Anne of Cleves also survived the king, and was the last of his queens to die. Catherine Parr married Henry on July 12th, 1543, and outlived him by one year. Fun fact – she was also the most-married English queen, with four husbands.

Henry died on January 28th, 1547. Six months after Henry’s death, she married her fourth and final husband, Thomas Seymour, 1st Baron Seymour of Sudeley. The marriage was short-lived, as she died in September 1548, probably of complications of childbirth.