The Goldfinch: Singing Across Time 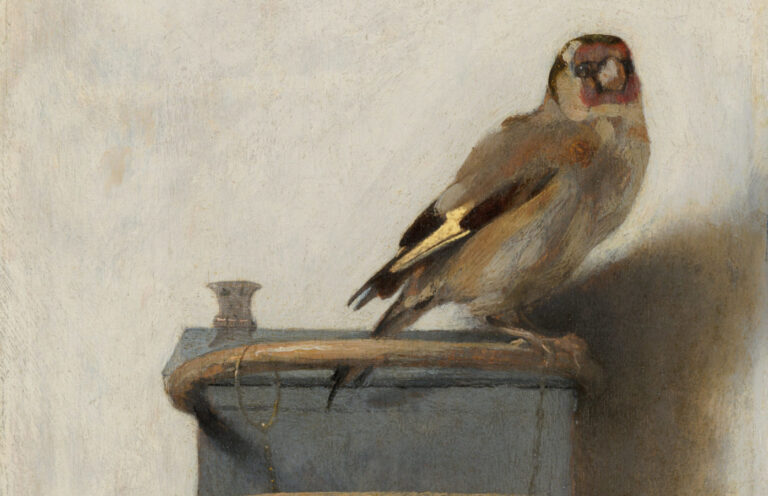 See the lonely little bird, trapped in a situation over which it has no control. Chained, isolated. Sound familiar? In these strange times we need even stranger stories. Read on about the goldfinch.

When I say The Goldfinch, what springs to mind? The oil painting? The Pulitzer prize winning novel it inspired? Or the film with Nicole Kidman? This story runs from 1654 right up to the present day. Who says art is just for dusty galleries and the chattering classes?

Carel Fabritius lived through the Dutch Golden Age of painting. Think Rembrandt, Vermeer and Frans Hals. Think artists focusing on the intimate details of everyday life. Think of a time when the Dutch dominated cultural, economic and scientific progress. Fabritius was born in 1622. Originally a carpenter he later worked within Rembrandt’s studio, and his art was well regarded by his contemporaries.

Fabritius was a painter showing huge promise, and who knows how many Fabritius masterpieces may have been hanging in galleries across the world today? Sadly, he died aged just 32, in an explosion that destroyed almost all of his work. The accident, in 1654, was a random tragedy – in a warehouse in Delft, 90,000 tonnes of gunpowder were ignited by a stray match. The Goldfinch, painted that exact same year, is one of Fabritius’ few surviving works. Egbert van der Poel’s A view of Delft after the explosion of 1654 shows the devastation of that night.

Novelist Donna Tartt saw the potential of this catastrophic story. Eleven years in the making, and almost 800 pages long, her bestseller won the Pulitzer Prize in 2014. Judges described it as ‘a book that stimulates the mind and touches the heart’. It is a ‘coming of age’ tale where the world of 13-year-old Theo Decker is turned upside down when a terrorist bomb goes off in a New York gallery, killing his mother. Terrified and bewildered he flees the scene, clutching The Goldfinch painting. Tartt draws us through the next 14 years of Theo’s life, as he moves from New York, to Las Vegas, to Amsterdam, the painting always his secret companion and symbol of his loss and isolation. I won’t spoil the story for you by giving away any more plot. But as we all have time on our hands right now, then get a copy of this incredible book and immerse yourself in it.

The critical acclaim around the book ignited interest in the film world. First touted as an Amazon series, but then made into a 2019 film directed by John Crowley. Despite all the A-list talent, on both sides of the camera, the film wasn’t well liked. Perhaps the grand scope of Tartt's novel was just too much to cram into two and a half hours. The original idea, of an 8-hour series, would perhaps have translated the Dickensian sweep of the novel much better. However, don’t take the critics word for it, try the film for yourself. If only for the beautiful work of cinematographer Roger Deakins.

But what is it about this tiny painting, saved from the Delft debris, that keeps us under its spell? It is a tiny piece, just 33 by 23 inches, on a piece of rough wood. It shows a life-size European goldfinch, perched on top of a blue feeding box. The bird is attached by a fine chain to a wooden ring. The white-washed plaster wall behind is plain.

Goldfinches have been pets since Roman times. Their intelligence and beautiful song made them much sought after. Birds were plentiful in paintings of course, as background, as symbolic representations, as dead meat in a still life. But as the main subject of a portrait? This was unheard of! Its candour and simplicity are unlike anything else produced at this time. The fast, vigorous brush strokes on the feathers are rough and the end of the brush has been used to scratch at the wet paint. The bird looks as if it could fly at any moment – except, of course, for that chain, which is recreated in exceptionally fine detail.

Technical analysis by art historians has never been able to identify the story of the Goldfinch painting. Nail marks and other indentations indicate it may have been part of a piece of furniture. Others suggest it was a decorative door panel. It is an unsolvable mystery.

The Goldfinch is now permanently on display at the Mauritshuis in The Hague. Our tiny bird is cordoned off, and always attracts huge crowds. In 2014, when it visited New York, 200,000 people queued to catch a glimpse.

Maybe it is the secrets it holds that make this singular image so moving and powerful. Its fragility is heart-breaking, yet it’s plucky ability to survive over 350 years speaks volumes to all of us in these troubled times. It speaks to us across time. As Donna Tartt says ‘it is a glory and a privilege to love what Death doesn’t touch’. Stay safe. Stay home little bird.